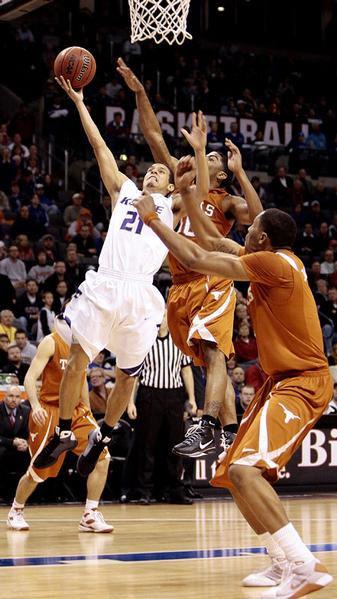 (MCT) TOA BAJA, Puerto Rico — In the center of Pájaros, the neighborhood where Denis Clemente grew up, there is a baseball field.

When Clemente first got into sports at the age of 5, he walked here from his Toa Baja home daily to play baseball and basketball. Back then, the field had rims and backboards as well as a home plate.

The hoops are gone now, and basketball in Puerto Rico exists almost entirely indoors. He’d have to go several blocks away to find an athletic club with a basketball court today.

"Every day was a battle," Clemente said. "You went to the field, put your stuff down, and said, ‘This is my spot.’ Then you had to defend it."

If not for his time on this field, he may never have moved to Florida at the age of 16 or achieved his dream of playing Division I basketball.

Clemente beat the odds and found success as a guard at Kansas State. The Wildcats’ senior guard was able to return to his home island last month for the Puerto Rico Tip-Off and play in front of nearly 60 friends and family members, many of who had never before seen him play.

The Wildcats beat Boston University and lost to Mississippi in their first two games of the tournament, and beat then-No. 18 Dayton in the third-place game.

Clemente’s mother, Raquel Pérez, said it was a fantastic weekend for his family.

"I feel so proud of him," Pérez said. "To play here in Puerto Rico, I know he has wanted to play in his home country. We feel so excited to watch him with his university."

Pérez describes her neighborhood as "humble, and a quiet place that can sometimes be noisy."

Clemente says Pájaros is one of his favorite places in the world.

"I have some good friends in the neighborhood," Clemente said. "They show me love every time I go there. Things are pretty nice where I’m from, and I like it."

But one of his former neighbors has a different take on the area.

Ask Roberto Arias, who works as a Univision sports reporter in Puerto Rico, about that part of Toa Baja and he will tell you about a massacre that took place in front of Pérez’s house two months ago.

"Three people were murdered in the street," Arias said. "One was a 2-year old child."

Arias’ mother lives next door to Clemente’s mother; Arias said he’ll remember the gory details for the rest of his life.

Arias said kids in that neighborhood are forced to make choices — they face distractions that make it difficult for teenagers to stay focused on school or athletics the way Clemente did.

"It is not uncommon for basketball players in our country to do well in college or professional leagues, but what Denis has done is big," Arias said. "Considering the place he came from has lots of problems, I would say he could have easily chosen that life. But he didn’t. He stayed focused on basketball and made it to the NCAA."

Arias credits Pérez for that.

Arias grew up playing baseball with Clemente’s father, Pablo, and believes he was one of the more promising athletes he’d ever been around.

"Had he stuck with it," Arias said, "I have no doubt he would have made it in the major leagues. He was that good."

But unlike Denis Clemente, Pablo gave into the distractions of Toa Baja. He lost focus on baseball.

When Denis Clemente became serious about pursuing a college basketball career, it was up to his mother to help him.

From a young age, she said that Clemente has always worked to get better at basketball and grew up as the best player in his neighborhood.

They remember him in Pájaros, and Pérez said people stopped her in stores last month to wish the family good luck with him back.

But he couldn’t have reached that status without leaving Puerto Rico during his junior year of high school.

When Clemente first pitched the idea of moving to Miami, his mother had only one question: Are you willing to give up the national sport of baseball?

"I told him he had to decide the sport he wanted to do," she said. "He played both sports at the same time. He chose basketball, and I said ‘OK.’"

Clemente said it was an easy choice.

"I grew up watching the NCAA," he said. "That was my goal. That’s what I wanted to do."

So together they moved to Florida and she helped get him to all the tournaments he could play in.

K-State basketball coach Frank Martin said some Puerto Rican basketball players are good enough to play in elite high school tournaments, but many of them don’t because it can be difficult for them to move to the U.S. mainland.

"It can be tough on some of those kids," Martin said. "They have to take the risk of leaving their friends and families behind."

Pérez’s decision to move with Clemente made the adjustment easier.

"Eighty percent of his success is due to his mom’s efforts," Arias said. "She was always taking him everywhere to every tournament. She gave him all the support she could. That is huge for where he comes from."

According to his family, he hopes to play in the NBA or Europe after leaving Kansas State. But if neither option works out, his third choice would be to play professionally in Puerto Rico.

Pérez hopes Clemente continues to be successful. As long as he sticks with basketball, she believes he will be.

So far, the sport has taken him to another country, given him the chance to receive a college education and helped at least one household in Pájaros forget about baseball.

"He spent a lot of time as a child on the basketball court and he still does today," Pérez said. "It is part of him and it is part of our family."