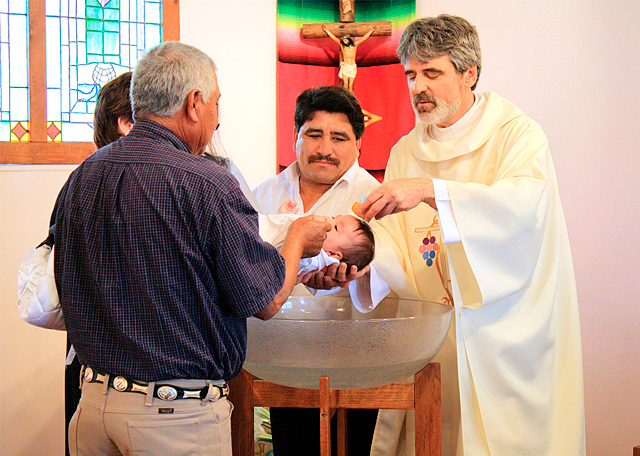 Thanks to socially aware priests at Ithaca’s Immaculate Conception Parish during the turbulent 1960s, Father Tim Murphy, GHM, got a clear message about how he should live out his faith: get involved.

"I was a regular altar server, hearing about the needs of the time with social issues, war and poverty. … They (our priests) exposed us to a broader world, that being Catholic is not just to go to church," Father Murphy recalled.

Spurred on by those exhortations, he traveled to rural southern Georgia for a one-year volunteer stint right out of college — and ended up devoting his life to missionary service in the Deep South.

This year Father Murphy, 58, celebrated his 20th year as a priest of the Glenmary Home Missioners order. The bulk of that time has been spent in Pontotoc, a small city in northeast Mississippi where he’s pastor of the Glenmary-founded St. Christopher Mission. He also serves as sacramental minister at St. Luke the Evangelist Mission, 35 miles away.

Other duties in Father Murphy’s expansive ministry include hospice chaplain, prison chaplain, individual and family therapist with Catholic Charities, co-convener of the Glenmary Commission on Justice, Habitat for Humanity board member, and director of Camp Glenmary, which annually offers programs for children from low-income families as well as those representing the state’s tiny Catholic population.

In his pastorate, Father Murphy ministers to numerous immigrant Mexican Catholic families working for low wages at nearby farms and furniture plants. On Sundays he offers an English Mass as well as a Spanish Mass that often numbers at least 200.

That Spanish Mass is held at St. Luke, which is located near the sweet potato farms where many of the workers toil, he said.

"There is there a sense of isolation," Father Murphy noted. "The church — I don’t want to go overboard, but the church is so important for families there. A place that is not only welcoming, but the comfort and just the solace is profound."

Many of the workers near St. Christopher have families who settled in the area and have found stable employment at furniture factories, he explained. The community as a whole has been able to avoid many of the immigration raids and deportations more common in other areas of the country, Father Murphy said.

"The people are obviously very aware of those (challenges)," he said. "But the rest of us, through Catholic Charities, have tried to lobby for (immigration) reform and the DREAM Act."

And the support that the workers and their families, mainly from Mexico, receive from the area’s Anglo community has been impressive, Father Murphy added.

"By and large, given the stereotypes of Mississippi, we’ve come a long way as a state, but we need to go further," he said. "There’s a lot of goodness. Conversion is person to person, that’s what the Gospel tells us. People are drawn to Jesus in the person of him. And the personal goodness of people and their faith and their strength and commitment to families and to faith — these are American success stories."

He said that black/white race relations — often a sore spot in Mississippi’s history — have improved significantly during his time there but added that "there’s a lot that still needs to be addressed, and that’s why we need the presence of the church." He also encounters great need in his longtime chaplaincy at Mississippi State Penitentiary, the state’s only maximum-security facility. Father Murphy makes the two-hour trip there every two weeks and is the only Catholic priest who ministers to death-row prisoners.

"It’s a ministry of presence," he said. "Most of the inmates are not Catholic, but it’s very meaningful to a lot of these guys."

Father Murphy said that less than 3 percent of area residents are Catholic — a typical setting for the Glenmary order, which focuses its ministry on small-town and rural parts of the United States where Catholic presence is scant and many are unchurched. He observed that Glenmary is generally welcomed in Pontotoc because its top priority is helping people of all races and religions.

"We’re not here just to be the Catholic pastors. You have to be out in the larger community," he stated. "Person-to-person and personal example are often what speak the loudest."

He comes home for two weeks every summer — his father, John, is a daily-Mass attendee at Immaculate Conception — and combines vacation with Glenmary fundraising appeals at diocesan churches. In August 2013 he appeared at St. Theodore in Gates and Our Mother of Sorrows in Greece. "The churches have been amazingly generous," he said.

Father Murphy is a 1969 graduate of Immaculate Conception School. After graduating from Ithaca High School in 1973 and the University of Massachusetts-Amherst in 1977 with a bachelor’s degree in education, he committed to a year with Volunteers in Service to America (VISTA) in south Georgia. He stayed in the area for several years after his VISTA service, working to obtain legal aid for the poor.

He began seminary in December 1985 at Washington (D.C.) Theological Union and completed studies in 1990, also earning a master’s degree in counseling that year from Loyola University in Baltimore. He came to Mississippi in 1992, one year before his priestly ordination, and remains there today.

He acknowledged being busy in his daily duties, but said his pace isn’t more grueling than any other priest and certainly not as daunting as that of area migrants toiling in the fields. Rather, he said he’s simply doing what all Catholics are called to do.

"The future of this church will be the Mexican-American communities," he said. "We have very good lay leadership. … Down the road, grace is going to be a strong Catholic Church in this area because of the people who came here. We are very different. It’s going to be in best sense of their faith and fidelity that keeps this church active. It’s a credit to them that there’s going to be a very active presence in this community. And in the best sense of the word of ownership, the future is very profound."