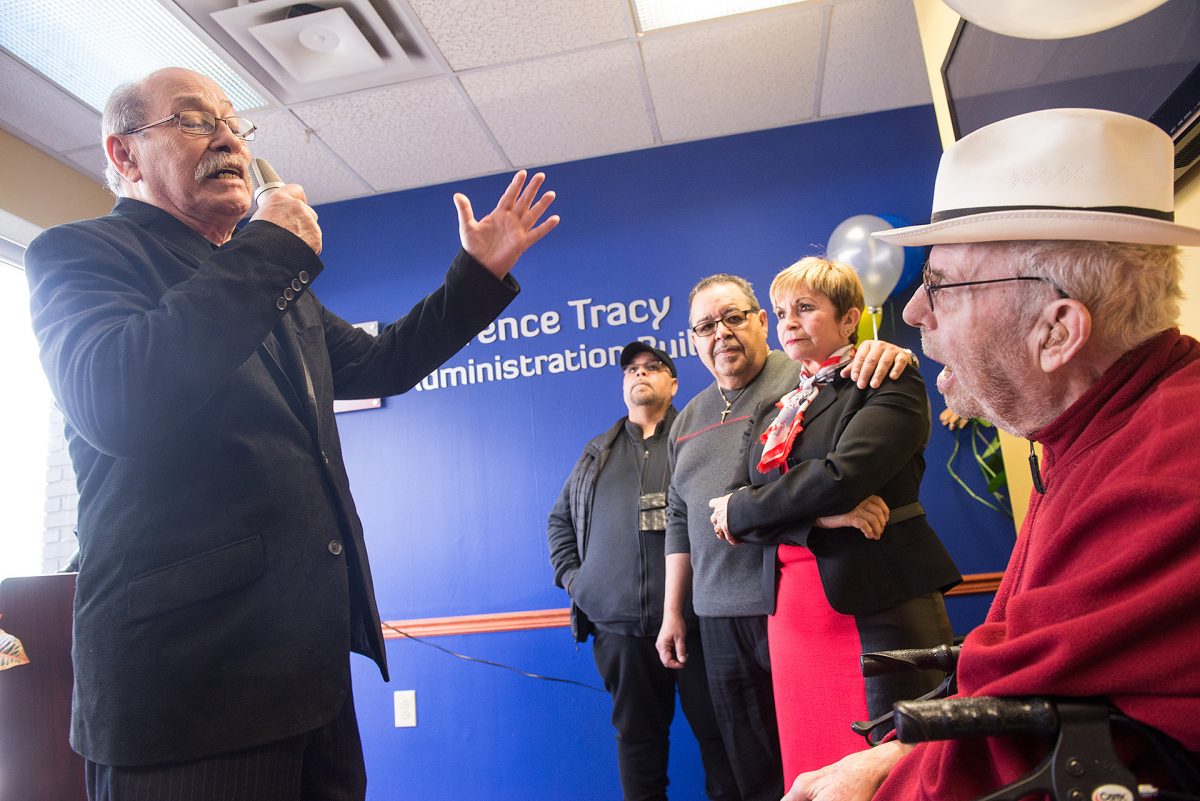 Johnny Vega sings an oringal song to Father Laurence Tracy during a ceremory to rename IBERO offices in honor of Tracy on Feb. 13 in Rochester. Tracy is a founding member of Ibero-American Action League EMC Photo by John Haeger

ROCHESTER — It may have been one of Rochester’s best-kept secrets throughout the last six months of planning.

But staff at Ibero-American Action League, leaders of the Hispanic community and friends of Father Laurence Tracy pulled off a surprise when he walked into a Feb. 13 ceremony naming Ibero’s office building at 817 E. Main St. in his honor.

Father Tracy is one of the founders of the agency, which celebrates its 50th anniversary this year. So it only seemed a fitting time to bestow him with the honor, Ibero officials and friends said during the ceremony in the building’s lobby. The “Laurence Tracy Administration Building” sign and portrait were unveiled after proclamations were read by representatives of state senators Richard Funke and Joseph Robach, Deputy Mayor Cedric Alexander and Monroe County Executive Cheryl DiNolfo.

The joint city-county proclamation called Father Tracy “a true street minister and model advocate: One who walks the walk with humility and love for those he serves” and named Feb. 13 as Father Laurence Tracy Day. DiNolfo joked that it should be Father Tracy month.

Father Tracy’s work has not only helped to improve the lives of Hispanics but many others in the community as well, she said.

“When you make a difference and impact on one person or one segment of the community, that impact is felt or resonates throughout the entire community,” DiNolfo added. “There is a huge ripple effect when good things happen or good things are done. … Certainly, Father Tracy has done that for our community, whether fighting for rights of Latinos or of civil rights, equality or justice, you set the bar very high.”

DiNolfo said Father Tracy is a dedicated public servant and servant of God.

“I encourage others to follow the work he’s done in the betterment of the community,” she said.

During the ceremony, Father Tracy joked that his greatest sin is pride and that he had made a promise to be more humble, but that the event was making it difficult to do so.

In his remarks, the priest also explained that his voice was hoarse due to ALS, also known as Lou Gehrig’s disease, with which he was diagnosed a few months ago. But he remained lighthearted in speaking about his condition, quipping, “We ain’t dead yet,” to great applause.

Father Tracy downplayed his own importance in Ibero’s establishment in 1968, but noted he did serve the important role of supporting local Hispanic leaders. He said he was mindful to not be “the great white savior,” and gave credit to such community pioneers as Julio Vázquez Sr., Edwin Rivera, Domingo Martínez and Domingo Garcia.

“They were my teachers, my mentors, who taught me about what the community needed and how to fight for it,” Father Tracy said.

The priest said that the agency needed more buildings to dedicate to all other deserving community leaders, and noted that Ibero’s work is not done in terms of addressing disparities in bilingual education, housing and health care.

“Together, let’s continue the struggle: Adelante la lucha,” he said.

The dedication ceremony included the performance of a song written for him and performed by Johnny Vega, who was joined by Freddy and José Gonzalez.

The many accolades for the priest were well deserved, said Julio Vázquez, a former Ibero president whose father helped establish the agency.

During the last 52 years, Father Tracy has been involved with every effort, organization, movement and task force that has been established in the community with the goal of improving the community for Hispanics, Vázquez added.

“I’ve been a better person and a better leader because of your example and advice,” he told Father Tracy Feb. 13, fighting back tears. “I could not have asked for a better mentor.”

Hilda Rosario Escher thanked Father Tracy for all the support he has provided to her as the current president and CEO of Ibero and called him a powerful voice for Hispanics. The priest never declined an invitation to any meeting where he was needed, she said, adding that she is proud to have Ibero name the building after him.

“He is someone who has dedicated his entire life to helping others,” she said. “His work in the Latino community has brought about important changes in some of the areas we most struggle with … and gave us a voice.”

Father Tracy has taught her and the Latino community well about fighting for its rights, said Mercedes Vázquez-Simmons, who said she has known the priest her entire life.

“We’ll continue to fight in your name,” she said.