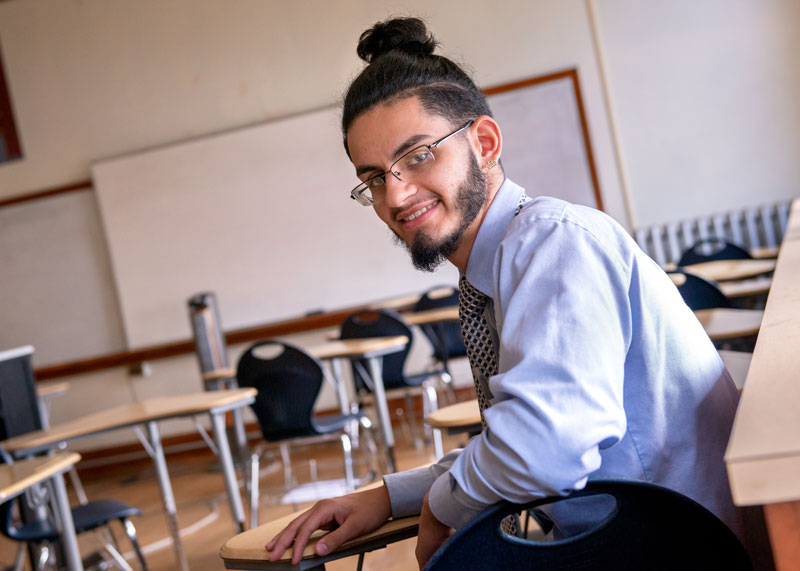 Ismael Cortes will be recognized June 9 during the 23rd-annual Hispanic Scholarship Gala.

ROCHESTER — Ismael Cortes hopes to be a filmmaker.

The senior at Rochester Preparatory High School said he became interested in videography after taking a photojournalism class offered by his school in collaboration with Rochester Institute of Technology. He and a class partner chose to make a mini-documentary about the Parcel 5 lot in downtown Rochester, he noted, which has been the subject of community debate on whether it should be developed or left vacant.

“Since then, I have loved video production,” he said.

At his school, he also started a morning show for which he does the filming. Currently, he said he is planning a farewell documentary about his senior class and a silent film for a project in his African-American literature class.

Cortes, 19, will be one of the 75 Hispanic students be recognized June 9 during the 23rd-annual Hispanic Scholarship Gala.

“This year’s gala will be special because we’re bringing in a national keynote speaker, a U.S. veteran who will share a powerful message about determination based on his own experience of having to learn how to walk again,” said Julio Saenz, Ibero’s chief communications and development officer. “The additional fact that he won ‘Dancing with the Stars’ … is a testament to his success.”

J.R. Martínez won the 13th season of the television dance competition show. The U.S. Army veteran suffered burns on 34 percent of his body and had to learn to walk again after a Humvee he was in hit a roadside bomb in Iraq in 2003, according to information from Ibero.

Prior to the gala, which is part of Ibero-American Acton League’s yearlong celebration of its 50th anniversary, Martínez will meet with students, their families and scholarship providers at a special reception. The scholarships will be awarded during the reception, noted Grace Tillinghast, chairwoman of the scholarship selection committee.

“We have wonderful students (this year),” she noted.

Cortes, who will receive the seventh-annual El Mensajero Católico/Catholic Courier scholarship and a scholarship from the Arthur O. Eve Higher Education Opportunity Program, plans to attend RIT and study business and video production.

He credits his mother, Alma Cortes, with putting him on the path that led him to college. Born in Rochester, he had moved with his mother and older siblings to Florida as a young child. When his siblings became involved in gang activity during their high-school years, she sent Cortes back to Rochester to live with his father, Ismael Cortes Sr.

“It was one of the best decisions she ever made,” Cortes said. “I grew up too fast … but it makes me look at things differently today. I understand what kind of struggles people go through. I try not to take things for granted.”

He said he felt grateful and a bit surprised when he received news that he would be recognized as a Hispanic scholar.

“It shows how people actually care about what young people are doing in the city, and their voices matter,” Cortes said. “People donating to us (Hispanic students), it makes me happy.”