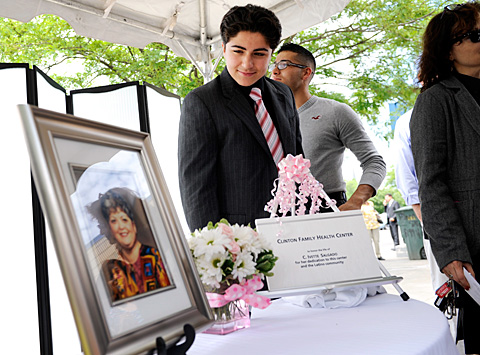 ROCHESTER — C. Ivette Salgado was recently honored for her dedication to ensuring that Latinos in the Rochester area receive high-quality health care.

Family members said it was a "wonderful surprise" when they learned that Rochester General Health System would honor their mother with a plaque recognizing her lifelong mission to help the Latino community. The plaque will be displayed at Clinton Family Health Center.

"My mother never did anything for recognition," said Vanessa Simmons, who attended the June 5 ceremony in front of the Clinton Center with her husband, Gregory; her father, Roberto; her sister Yvonne Salgado; her sister and brother-in-law, Melissa and Michael Keefe; and other family members.

"But we were so honored that she was given this beautiful ceremony," she added.

Simmons said that her parents would have been married 53 years this fall. Salgado died Sept. 10, 2012, at the age of 72. The plaque dedication was moving for family members, who are still adjusting to her loss, Simmons added.

"It was a beautiful thing," she said of seeing so many community leaders attend the ceremony.

Throughout her life, Salgado received many other accolades including Hispanic Heritage awards and a national recognition called the Jefferson Award for community service and foster care. Salgado served as a foster mother for more than 25 children, according to her obituary that was published in El Mensajero Católico.

Salgado worked for Action for a Better Community for 30 years and created Rochester’s first nursing assistant program in 1972. She personally recruited nurses from Puerto Rico, Michael Leary, president of Rochester Primary Care Network for which Salgado was a founding member, recalled during ceremony.

"The community owes a tremendous debt to Ivette," Leary said.

Jim Sutton, director of community medicine for Rochester General Medical Group, said that Salgado also was instrumental in the creation of Clinton Family Health Center so it only made sense to display the plaque there.

"Clinton Family exists today … in offering all the services offered; it exists because of individuals like Ivette who tirelessly advocated for those couldn’t advocate for themselves," he said.