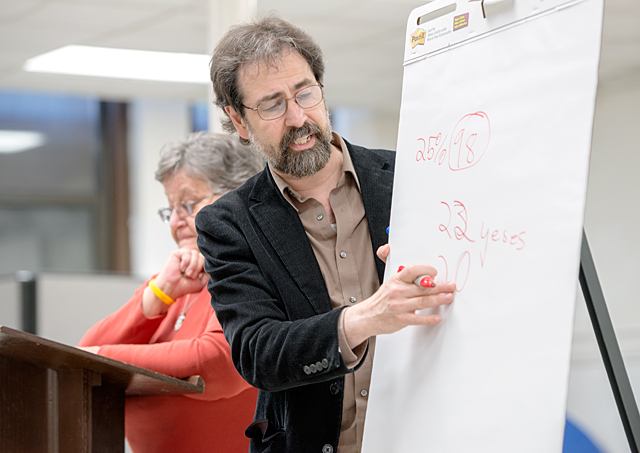 ROCHESTER — Rochester ACTS is looking to boost voter engagement and Latino community involvement in its advocacy efforts this year.

The faith-based organization also will continue fighting for more child-care funding and a minimum-wage increase, said Carlos Garcia, president of the executive committee for Rochester ACTS (Alliance of Communities Transforming Society). The group, which formed in 2014, includes members from 19 congregations and community organizations.

"This year, there is not just one issue that we’re trying to concentrate on, given the fact that there are so many things going on in our community," he said.

Last month, Rochester ACTS and other area member congregations launched the program "Sacred Conversations," a concept that began in Ferguson, Mo., after Michael Brown was killed by a police officer in that city. The program in Ferguson was a series of workshops to help neighbors in that community connect, according to information at http://bit.ly/285Ljyp.

In Rochester, the goal of the "Sacred Conversations" workshop that took place May 19 — with more to follow — was to reflect on how to use voter engagement to dismantle racism in Rochester, Garcia said.

Such tactics as voter registration drives and special events for candidates, as has been done in the past, will not be enough to engage voters this election season, he observed. Community leaders have to start thinking differently in order to get Latinos registered and to the polls in November, Garcia said.

Carlos Garcia sits in on a discussion during the Sacred Conversation workshop May 19 at Rochester’s Our Lady of the Americas.

"What we want to do is keep in touch with people, inform them about what’s going on and make sure they actually go out and vote," he said.

The impact of raising the Latino profile in terms of voting and other advocacy efforts could be huge, Garcia said.

In Monroe County, about 35,000 out of more than 55,000 Latinos live in Rochester and are eligible to vote, Garcia said. Of that population, about 11 percent are registered to vote, according to U.S. Census Information (http://censusviewer.com/city/NY/Rochester). Of that 11 percent, about 500 people vote, he noted.

"We (Latinos) could be a major force in terms of our local community," Garcia said. "I hear time and time again on both sides (Democrat and Republican), why bother talking to them? They don’t vote. We truly are a sleeping giant here."

Cristina Acosta of Irondequoit, a St. Frances Xavier Cabrini parishioner, recalled that many Latino families were actively involved in the local political scene from the 1960s through the 1980s. But in recent decades, few Latinos have stepped up to maintain that strong presence, she said.

"In terms of social action … Latinos are missing," remarked Acosta, who first heard about Rochester ACTS during a Lenten program earlier this year and is considering becoming a member.

Mario Escalante, former executive committee president for Rochester ACTS, said he has heard many reasons for potential Latino voters’ lack of engagement. The reasons include lack of transportation, feelings of disconnectedness from elected officials and not understanding the nuances of the political process, he said.

"They need the spark (to participate)," he said.

If Rochester ACTS and other community groups are able to create that spark, the hope is that the spark will lead to Latinos becoming active again in local politics, Garcia said. Rochester ACTS recently developed a strategic alliance with La Cumbre to recruit members and work on the organization’s goals, he added. La Cumbre is an ad-hoc advocacy group that also focuses on voter engagement and improving government representation for Latinos.

"This is an ongoing process," he said. "We need to continue to get people excited (about being involved in the community)."

Rochester ACTS generated a lot of community interest across all groups last year when it focused its efforts on increasing early childhood education subsidies for families, Garcia noted. While state funding for child care increased by $5 million in the budget approved in April, the increase is earmarked to cover additional costs to meet new federal inspection requirements instead of providing additional subsidies for families, according to information from the Empire Justice Center (http://bit.ly/22vCzxt).

"But we were successful in creating attention to the issue," Garcia said of Rochester ACTS’ efforts, which included a postcard campaign, a protest march and meetings with elected officials.