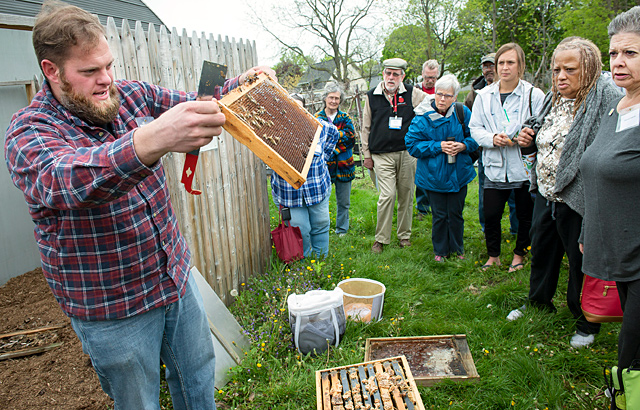 ROCHESTER — City gardeners lacked a sense of being part of a larger community for many years, according to organizers of the second-annual Urban Agriculture Conference.

"We want to bring gardeners together and let them know that they are part of something bigger," said Nathaniel Mich, who represents Foodlink as part of the Urban Agriculture Working Group (UAWG). The group coordinated the May 13 conference at Dr. Louis A. Cerulli School No. 34 in Rochester.

Foodlink served as one of several community sponsors for the daylong event as well as prepared the lunch for the more than 130 participants, explained Mich, the agency’s community food access programs coordinator. One of the main tenets of Foodlink’s mission is to build healthier communities, and connecting city residents with the resources to grow their own food is a natural extension of that work, he added.

Other cities also have used urban agriculture to boost economic development, Mich noted. In Cincinnati, city residents created a company to build hoop houses to promote yearlong gardening, he said. Hoop houses are greenhouses that use plastic covering instead of glass.

To create jobs and training opportunities like in Cincinnati, however, residents need greater access to vacant land, Mich said, which is a challenge in Rochester. UAWG will focus its efforts this year on urging city council to change its land use policy, he added. Currently, community gardens are considered a temporary use, Mich explained.

Under the current zoning ordinance, the city enters into licensing agreements with nonprofits and other parties interested in utilizing vacant city lots for community gardens until such time as a buyer is found, according to information at http://bit.ly/2qjWGlp. These garden permits are valid from March 1 through December 15 and may be renewed on an annual basis. According to cityofrochester.gov, zoning officials reserve the right to revoke a permit at any time, including during the growing season, for violations or when the land is needed for another purpose.

"Community gardens are at risk of being sold at any time," said Amber Powers, a UAWG member and a board member for the newly formed Taproot Collective that promotes composting and container gardening.

Thus far, UAWG has met with the city’s planning department about the possibility of changing the zoning ordinance to give community gardens a greater sense of permanence, she said.

Allowing community gardens to flourish is a win-win in terms of feeding people and improving their health, Mitch Gruber, Foodlink’s chief programs officer, noted during the opening session of the conference. Studies have shown that children who participate in growing their own food tend to eat healthier, he noted.

"You’re also getting to know your neighbors and realizing your power as citizens" by working on a community garden, Mich added.

Deborah Roberts of Rochester said community gardens also help create safer neighborhoods because residents are engaged and personally invested. Two years ago, she became part of the Garden of Hope at the intersection of Depew and Forbes streets, she said. And last year, the garden’s 12 raised beds produced more than 570 pounds of "edible produce," said Roberts, who attended the conference for the first time.

This kind of gardening "is a real way in real time that people can see their labor, their effort, their passion for something producing a tangible result," she said.

For such gardens to flourish, residents also need bees, explained Austin Pettigrew, who with Brian Babcock founded a nonprofit called SweetBeez in 2013. During the May 13 conference Pettigrew presented a workshop on urban beekeeping at the Lexington Avenue Urban Farm. The farm is located a block away from School No. 34 and is part of a Foodlink garden project that serves the city’s refugee community. SweetBeez also has helped create beekeeping clubs at area schools such as the Harley School, McQuaid Jesuit High School and Rochester Institute of Technology. World of Inquiry School No. 58 also has an observation hive for students to learn about bees, he said.

Education and increasing the honeybee population are essential to all residents, as colony collapse disorder has caused an 80 percent loss of bees in the city of Rochester alone, he said.

"One in every third bite of food is pollinated by the honeybee alone," Pettigrew said. "We’re experiencing a 48 percent (drop in honeybee populations) nationwide. And we’re not doing anything about it … other than what we’re trying to do (promoting beekeeping)."

Anyone can be a beekeeper, he said, with an initial investment of about $400 for a hive kit and bees. Residents also can help by planting bee-friendly plants, not spraying pesticides and not pulling dandelions from their yards.

Kelley Parker, who attended the beekeeping workshop, bought a hive last month to start her own colony in her Hilton back yard. Her interest in bees came after a trip to New Zealand.

"Plus, I’m a gardener and bees are good for pollinating," she said.

Parker attended the conference with her friend, Emily Nehrt, who recently moved back to the area after living in Boston for a couple of years after graduating from Colgate University. Nehrt said she also has started growing produce in raised beds and wanted to learn about small-scale gardening. Although they live in the suburbs, Parker and Nehrt said they care about what happens in the city. Nehrt said she spends a lot of time in the city at restaurants and shopping at the Rochester Public Market.

"A lot of our friends live in in the city," Parker added. "And young people care about the environment and our health and want to find a way to contribute."