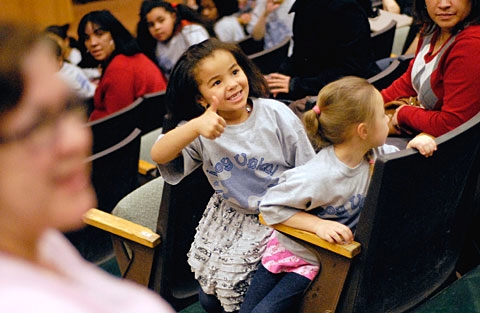 But the organization geared the information to parents and focused on the forms of bullying used more often by teenagers these days — through cell phones and on social media sites. Presenters urged parents to stay informed and offered strategies on how to help their children if they become the target of a bully.

Teen suicides in recent months have highlighted the issue of bullying nationwide, and President Barack Obama even held a summit on the subject, Marisol Ramos-López noted during a bullying workshop she copresented with Patricia Mason from the Center for Dispute Settlement. The president posted a video message about bullying at www.whitehouse.gov/blog/2010/10/21/president-obama-it-gets-better.

"We really have to be aware and stay connected to protect our children," Mason added.

The workshop was one of several held for 150 girls and their parents during the March 19 rally presented by Latinas Unidas at the University of Rochester. The event also included a Zumba demonstration and a fashion show with dresses for quinceañera and prom celebrations.

The theme for the girls’ workshops was "Healthy Living, Healthy Choices," with a focus on financial well-being, said Daisy Rivera-Algarin, Latinas Unidas president.

"It’s a holistic approach," she said. "When you talk of being healthy in life, one of the major stresses is money which can lead to disease."

By making these mind-body connections, girls can understand that creating a sound financial foundation will help them avoid money-related stress factors later in life, she added. And going to college is part of that sound foundation, Rivera-Algarin noted.

The information about college life that friends Jasmin Jackson, Ashley Rivera and Aurea Rosa-Santos received during their workshops did help ease their minds about what is fast approaching in their futures. All three are seniors at area high schools as well as candidates for the Miss Puerto Rico of Rochester pageant.

"They answered all the questions we wanted (during the workshops)", noted Rivera, 18. "And it gave us a bit of comfort."

The three girls also were impressed with the rally overall.

"It’s a good for Latinas to come together … and connect," Rosa-Santos said.

The rally also helps boosts the self-esteem of Latina girls, and the speakers who greeted them provided good role models for them to emulate, said Laura Rodriguez-Acosta, a teacher at Rochester’s School No. 22, who brought along seven students. The speakers included Gladys Pedraza-Burgos, director of youth and family services for the Rochester City School District, and Melisza Campos, a school board member.

"It helps them to feel that they’re not alone," she added.

The rally should draw more girls and more parents, added Maria Rivera of Rochester. Not only do the presenters provide useful information, but it also is a great way for mothers and daughters to spend time together, she added.

"You’re learning something and it’s bonding time," remarked Rivera, especially if one has an older daughter.

The information provided by Mason and Ramos-López, neighborhood enforcement officer for the city’s northeast area and the rally’s comadrina, also was valuable even if startling for some of the parents, said Rivera who added that she makes sure she stays on top of her children’s computer and phone interactions.

Facts presented during the presentation included:

Ramos-López said most parents remember bullies from their own childhoods and how they or their friends found ways to deal with them. But cyberbullying is such a different realm, she added, because it often involves rumors and is anonymous. And a rumor sent by one person via a text message on a cell phone can go to any number of people, she added.

"It goes beyond honestly anything that we can comprehend because we didn’t grow up with it," she added.

Mason said that it’s important to know the websites children are accessing and limit the use of cell phones and online sites. Her 13-year-old son recently faced a criminal charge when a friend sent a prank text to several friends. Another parent took the text seriously and associated the message with Mason’s son because his phone number was the first one listed among the recipients of the message. While the situation was quickly cleared up, Mason said that she learned new information and she is known as an expert on the issue.

"All the things our kids are doing on the phone or on Facebook; we can find ourselves in (such) a situation," she added. "And telling police you didn’t know (about it) is not good enough."

They recommend placing a computer in a common area, setting up accounts with one’s child and having all passwords, and discussing the issue of bullying with children.

"We have to stop being our kids’ friend and be our kids’ parent," Mason noted.