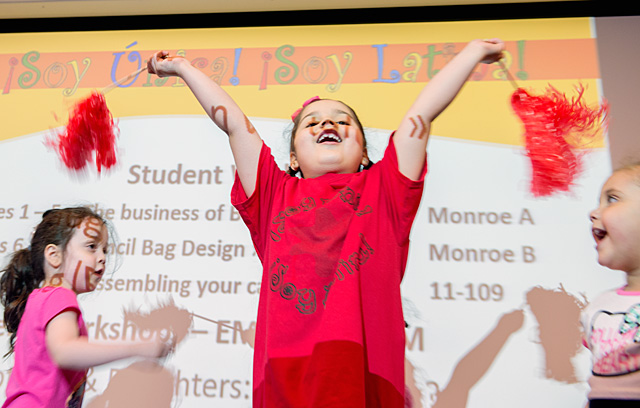 "You find the Latina in you," said the 16-year-old sophomore at James Monroe High School. "You find the confidence and pride of … being a Latina."

Jailene was one of several teen ambassadors at this year’s rally who helped out during the 13th-annual event held April 18 at Monroe Community College. Next year’s rally will be held at St. John Fisher College.

The teen ambassadors also presented a salsa demonstration to kick off the day’s activities for the more than 100 area girls who participated.

The day’s other activities included middle-schoolers pairing up to design pencil cases, with one girl in each pair acting as the designer and the other as the client. Younger girls learned the business of making bubble solution, while high-school girls explored careers.

The rally focused on the STEM fields (science, technology, engineering and mathematics). Organizers tied in that theme with the choice of Julissa Ramírez as this year’s madrina (godmother). The Dominican Republic native who grew up in the Bronx is a project manager at Intel Corp. in San Francisco. She graduated with a bachelor’s degree in electrical and mechanical engineering technology and a master’s degree in manufacturing and mechanical systems from Rochester Institute of Technology.

Ramírez urged the girls to consider studying STEM subjects no matter what careers they are considering because they teach such skills as critical thinking. She also said they should heed advice from teachers. Her third-grade teacher assigned her with her first job tutoring fellow students.

"It is very important to listen to your teachers," she said. "They may change your path going forward."

In high school, her love of drawing and science came together when she discovered medical illustration. And her favorite subject to this day is physics, she said.

Deciding to pursue engineering allowed her to draw from all her strengths, she added. And she soon realized she was breaking down stereotypes that still need to be addressed when she was the only Latina or person of color in her college courses, Ramírez noted.

Getting such information, boosting the girls’ cultural pride and connecting with other Latina girls and role models are valuable components of the rally, said Luz Santiago, who came out to the event for a second time with her daughter, Jalisa Egues, who is a sixth-grader at Flower City School No. 54.

"She’s kind of shy," Santiago said of her daughter. "So this (rally) helps her be able to speak to other girls her age who are not only from the city from other (towns)."

EDITOR’S NOTE: For a video and more photos of the rally, visit https://en.elmensajerorochester.com/photos-videos.