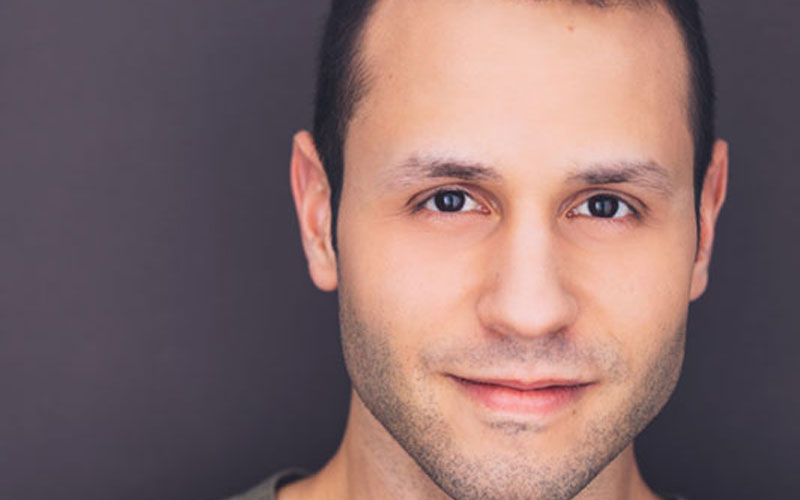 ROCHESTER — A native of the Dominican Republic has taken on an iconic role in a holiday classic this year.

Sommer Carbuccia, 25, is portraying “Bob Cratchit” in Geva Theatre Center’s production of “A Christmas Carol,” which runs through Dec. 29.

He is the first Latino actor to play the role at Geva, which most people think of as traditionally “Anglo” or British, Carbuccia told El Mensajero Católico during a Nov. 8 phone interview.

“Essentially, (the story) is just a story of acceptance and holiday spirit and love thy neighbor,” Carbuccia said of playing Bob Cratchit. “That (role) doesn’t necessarily have to be focused on any specific race or ethnicity.”

Carbuccia was in Colorado until Nov. 11 performing in the lead role of the regional play “Paper Cut.” He then traveled to Rochester Nov. 12 and began rehearsals for “A Christmas Carol” on Nov. 13, he noted. The show opened Nov. 29.

Mark Cuddy, Geva’s artistic director, said that most of the cast members have returned annually since the theater began producing the play seven years ago. Given the chance to fill the Bob Cratchit role this year, Cuddy said he wanted to cast a “nontraditional” actor.

The move is part of Geva’s work to expand diversity in all of its offerings, including productions of plays written by people of color, Cuddy noted.

“We’re certainly not the first ones to cast non-Anglo actors in ‘A Christmas Carol’ or any other classics,” he said. “(But) we’ve been working on that over the last few years at Geva — making sure we’re opening up opportunities for actors who wouldn’t necessarily think of those roles. … We’re just trying to reflect the world a little bit. Especially in this story, we have so many families and young children (in attendance). As you can imagine, it’s so important that they see someone who looks like them or has a name like theirs.”

A year ago, Cuddy said he cast an African-American actor to portray “Jacob Marley” after the actor who had played the role since Geva’s production began stepped down.

“We continue to diversify, provide for better inclusion in our shows,” he said. “It’s a start.”

Carbuccia fit the bill with his honesty and vulnerability and with a kindness that shows on his face, Cuddy remarked.

“Those are all Bob Cratchit qualities,” he said.

Carbuccia said he decided to send in a video audition because he had heard Geva was a good theater to work in as an actor.

“Being able to be part of a long-running Rochester Christmas tradition sounded exciting,” he remarked.

Carbuccia also is happy to continue landing acting jobs after he found his passion for theater in high school, he said. Winning a regional competition sponsored by the National Shakespeare Association took him to New York University, where he participated in an acting workshop.

“I decided this is where I wanted to go to school, and I made it happen,” he said.

Since graduating from NYU’s Tisch School of the Arts, he has found roles in television and film but mostly has played roles in stage plays and musicals. He relates to a comment made by his director in Boulder about the live theater experience, Carbuccia said.

“There is an empathy about being invited into this space with the actors and the audience next to you,” he said. “It makes you understand the story in a different way.”

One of his first gigs, though, was doing Spanish voiceovers for radio ads, Carbuccia added.

“I’ve auditioned for roles where you have to speak Spanish but haven’t landed any. But I’m not opposed,” he said. “I have had to put on a Spanish accent for different roles. At that point, I just mimic how my dad speaks.”

Carbuccia, who moved from the Dominican Republic to Orlando with his parents when he was 4 years old, noted that Spanish is his first language.

“My parents didn’t let me speak English in the house while growing up,” he said. “They didn’t want me to forget it (Spanish). But I would say things like, ‘I want to speak English. I’m in America.’”

Carbuccia said he envisions creating his own production company someday to honor his parents, especially his mother. He hopes to one day tell her story as a “love letter” in gratitude for her hard work cleaning houses so he could attend an expensive university, he noted.

He vividly remembers one bittersweet moment with her during his childhood. Carbuccia said he would often accompany her after school so she could continue her work. One day when he was about 9, he was hungry, and his mother scrounged up $1.25 from her purse to buy him what he wanted from Taco Bell.

“And then I dropped the taco and we were crying,” Carbuccia said. “Now, we laugh about it because we’re doing better and things aren’t as hard.”

His mother, who still cleans houses, was supportive of his dreams from the beginning, as she only wanted him to work hard and be happy, he said. His father was a little more tentative about his acting plans.

“I want to work continuously; that’s been a blessing so far,” he said. “Now that he sees me doing well. … That makes them really happy.”