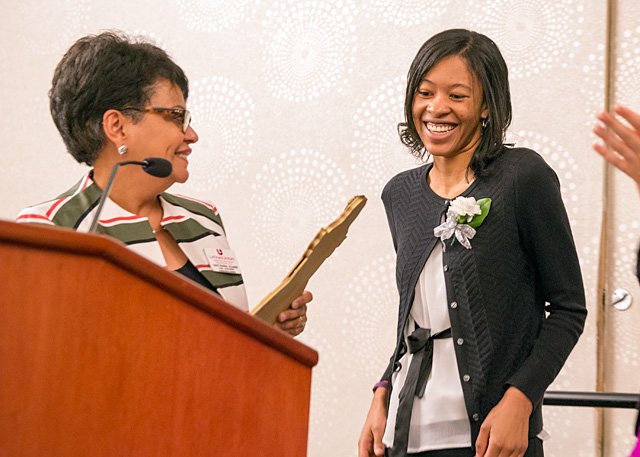 ROCHESTER — "Love begins by taking care of the closest ones — the ones at home."

Tabita Torres ended her acceptance speech with this quote from St. Mother Teresa upon receiving one of four Reconocimiento Awards from Latinas Unidas during the organization’s 23rd-annual luncheon Nov. 3.

Stephanie Paredes, who was recognized last year by Latinas Unidas, called Torres an "unsung hero" and nominated her for commitment to helping not just the Latino community but the Rochester community as a whole.

Torres, a marketing specialist and program associate with Rochester Institute of Technology’s Office for Diversity & Inclusion, was honored for her volunteer service. She has been a volunteer for several local organizations, including Latinas Unidas’ Soy Unica! Soy Latina program, the Puerto Rican Pageant and United Way of Greater Rochester’s inclusion committee.

"By giving to others, I’ve discovered who I am, what I can contribute to others, how I can make a difference," noted Torres, who also thanked her mother, Dorca Rodríguez, for her unfailing support.

Recipient of the Volunteer Service award, Tabita Torres gives her thanks during the Latinas Unidas 23rd Annual Reconocimiento and Scholarship Awards Nov. 3 at the Hyatt Regency Rochester Hotel.

The other women honored during the Nov. 3 event were:

* Librada Paz, a research technician at the University of Rochester and recipient of the 2012 Robert F. Kennedy Human Rights Award, for inspirational leadership.

Tricia Cruz-Irving from Ibero accepted the award on behalf of Rosario Escher, who was in Puerto Rico at a conference. Rosario Escher became Ibero’s first female director a decade ago and has received numerous accolades over the years, including the New York state Senate’s Woman of Distinction Award in 2012, explained Daisy Rivera-Algarin, the event chair who presented the award.

Kelly Mullaney said she nominated Rosario Escher after reviewing past honorees and not seeing her name on the list. Usually, Latinas Unidas prefers that nominations come from community members and not the organization, noted Mullaney, who serves on Latinas Unidas’ board of directors.

"This was something that had to be done, (however)," Mullaney said of recognizing Rosario Escher. "She deserves it. We appreciate what she does. We love her."

For Maria Eugenia Muñoz, Paz also was deserving of the award for all that her longtime friend had overcome throughout her life. Paz came to the United States as a teenager from Oaxaca, Mexico, and worked for many years as a migrant worker and eventually went on to earn a bachelor’s degree in mechanical engineering from RIT, according to a January 2013 El Mensajero Católico article (http://bit.ly/2e6jX8n).

"Paz is an amazing determined woman and a true fighter," Muñoz told El Mensajero in an e-mail. "She is always encouraging people around her to speak up for what is right and what is not, and always there volunteering in the community. She has given big hope and inspiration to many women around her because of her encouragement to others to be able to achieve what they desire in life."

"Today, she is a great leader and a tremendous example in our community that shows us that everyone can achieve something in life if they work towards it," she said.

After the luncheon, Paz said she hopes her story will serve as inspiration for others to never give up on their dreams. To that end, she is in the midst of writing a book about her life that she hopes to publish in 2017.

"That is my goal: to motivate others that they can achieve something," she said.