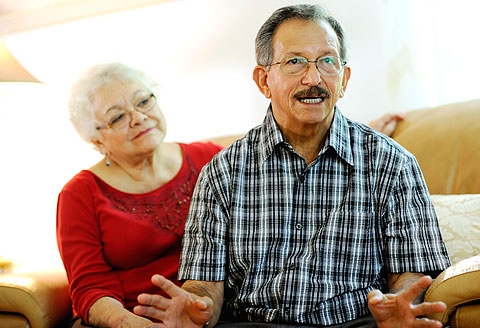 He immediately began helping out at an uncle’s food stand. The uncle then took to the Department of Labor to find a job.

In those early days, Rivera could never have imagined that he ultimately would work for the Puerto Rican government as a representative in Rochester or for various federal offices as he ended up doing for decades.

Nor could he have predicted that he would become the first Puerto Rican elected official in the area.

"I was a bit ahead of my time because they couldn’t get another Latino elected for a long time," he said. "But there is a time for everything, says the Lord. … I came up early and there were not enough Hispanics (then) to really have that power."

Rivera explained that everything he did during that time and the years that followed were focused on improving the lives of Latinos. But, he noted, his own family of seven children sometimes paid the price. During the period that he was immersed in politics, his children were very young, Rivera explained during an interview in June at his son’s home in Fairport.

"I had to do a lot of catch up because those were the formative years," he said. "And sometimes you can’t catch up."

Not that he would have lived his life any other way, added Rivera, 73. And his children have nothing but gratitude and pride for having worked alongside their dad in serving others and fighting for the rights of the underprivileged and those with disabilities, said Edwin A. Rivera, the eldest son. Two of his sisters are legally blind, he noted.

"It wasn’t a different way of life, it was the way our family lived," the younger Edwin Rivera added. "It seemed natural for there always to be people around. And also, that we’d be doing what we could to help."

That included hopping into their dad’s car and driving out to migrant worker camps to hand out literature and offering information, he added.

"I think you see the needs and I had some natural (inclinations) when I see something that’s not right, ‘I think what can I do?’ " the elder Edwin Rivera remarked. "I was too young to think about limitations."

Nearly 50 years have passed since he became the youngest person elected to the then Monroe County Board of Supervisors in 1963. And he left behind a powerful legacy, concurred Julio Vázquez, who worked alongside Rivera with the "Hermanos Católicos" group that eventually became Ibero-American Action League, and José Cruz, a former county legislator now running for the 137th Assembly district.

"One of the important things that Edwin did and the group that was with him, the old group, was really for the first time entered the arena for local Rochester politics," Cruz noted. "And he showed many people in the community that … you could get involved politically and you could make a difference even back (then)."

When he met Rivera, Vázquez said that he was a young, married man that knew little more than the routine of his life: work, home, church and daily rosaries with his parents.

"I thought he was cool," Vázquez said. "And he was very knowledgeable about community issues and community organization and politically savvy and well-spoken. … He was my first mentor, one who I looked up to, to emulate."

And while Rivera had just lost a primary election following a redistricting of county legislative boundaries, he still made a huge impression on young Latinos at the time, Vázquez remarked.

That political career began during his days working at Timely Clothes as a cloth cutter, Rivera explained. Soon after arriving from his native Adjuntas, Puerto Rico, Rivera said that the state Department of Labor sent him to work for American Clothing Workers of America and then Timely Clothes.

In 1961, he first ran for constable of the city’s 5th Ward, a position then that was used to help garner support for the ward supervisor candidate, Rivera explained. Shortly after the election, his ward supervisor resigned and he was appointment to serve the rest of the term. Subsequently, he ran for the seat and won in a district comprising many German and Jewish families as well as Hispanics and African-Americans, he added.

"For the most part, we’re all dealing with the same critical issues," Cruz noted about that support from different ethnic communities. "That lesson has not been lost on any of us — that we represent the entire community. … It’s amazing what he was able to accomplish."

Following his success, though, came "the big change," Rivera said. The Board of Supervisors became the Monroe County Legislature and his small ward evolved into a district twice its size, he added. A primary election followed, and he reluctantly took a shot at winning a seat, Rivera explained.

"If I didn’t run, the people who had supported me would have been disappointed, but the chances to run and win were not that great," he said.

His downfall, he said, was not having enough people to monitor all the voting booths.

"Two booths were left unmanned and in those two booths, I didn’t get one vote," Rivera said. "I lost by 24 votes."

During that period, Rivera also helped advocate for the rights of Puerto Rican voters, he said. In what became known as the "Maria Lopez case," Rivera fought against a language test that Puerto Rican residents were being forced to take before being allowed to vote. A state court ruled against that requirement and registration booths were reopened just for Hispanics, he noted.

Voters today often aren’t able to appreciate the efforts made by pioneers like Rivera because of all the personal issues they’re dealing with, Cruz said.

"Today, people don’t understand the power of the ballot box," he noted. "But you have to be sensitive because folks are so focused on everyday survival. … But politics enters everybody’s lives individually every single day."

After those political accomplishments, Rivera focused on his community work with the Hermanos Católicos — a group that came out of the former St. Bridget Church. It was that volunteer work with the migrants that led to a job with the Puerto Rican government, which had an office on State Street. He served as a migrant worker advocate ensuring they received the salary and benefits due to them and also assisted workers with finding employment, he said. Prior to that, he had worked for Rochester’s office of the city manager.

Concurrently, Hermanos Católicos set up a meeting with then-Bishop Fulton J. Sheen to discuss creating a center to meet the needs of the growing Hispanic community. Bishop Sheen offered the group a property at the corner of Clifford and Hudson avenues for $1. Hermanos Católicos cleaned the place up, began offering language assistance and community services, and founded Ibero-American Action League in 1968. Rivera served as the first chairman of the founding board of directors. His son, Edwin, continued that legacy decades later and served on the board for many years.

In 1969, Rivera received a job offer from the U.S. Department of Justice that he couldn’t refuse, he said. But it meant that he had to uproot the family and move to Buffalo. The pay raise, though, would allow him to send the kids to Catholic school so he took the offer, noted his wife, Margie. A short two years later, that office closed but he found work with the Department of Defense’s contract compliance office. Then, an opportunity arose in the Department of Housing and Urban Development as director of the office of equal employment opportunity. When that office reorganized, Rivera was given a choice to relocate in Washington, D.C., or Puerto Rico or stay in Buffalo.

He chose Puerto Rico, where he has lived for the past 33 years. There, he and his wife oversaw a program similar to Marriage Encounter for about 18 years and finally gave that up about a couple of years ago, said Margie Rivera. The couple has been married more than 50 years.

"We wanted to retire," said Edwin Rivera. "The first 12 years I worked full time, I never took a day of vacation. … I’m catching up now."