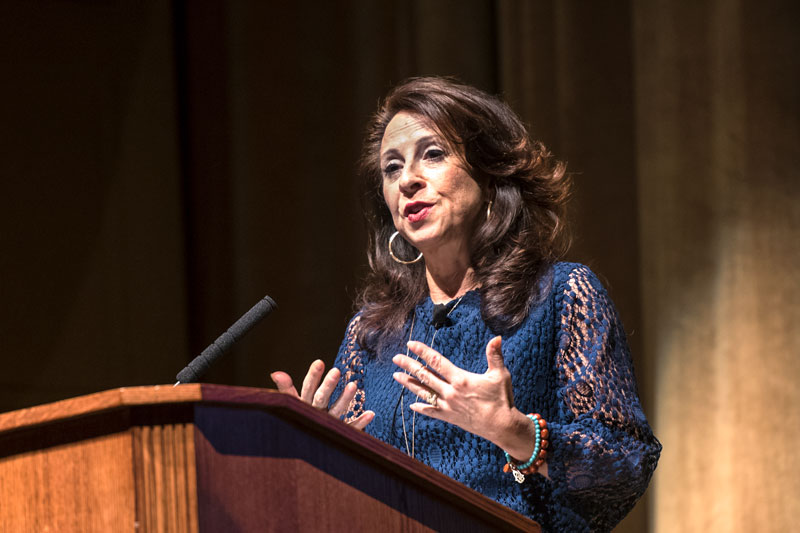 The annual event was established in 2001 by the university’s Office of Minority Student Affairs (OMSA) and the Office of the President to promote issues of diversity, freedom, civil rights and social justice. During a Jan. 19 press conference at the UR’s Frederick Douglass Leadership House, Hinojosa said felt humbled by the distinction, and she later acknowledged during her address in Strong Auditorium that she had struggled with what she should say.

“My first question was, ‘Why me?’ What do I have to say that could be so important on such an auspicious occasion? Why would anyone want to hear from me?” she remarked. “And in some ways, this is so simple, and yet it too goes to the core of some very deep-seated problems in our country. Because why wouldn’t it make sense that a Mexican-born immigrant woman journalist would somehow feel inadequate in our United States of today? … Because for immigrants, for Mexican immigrants, for Latino immigrants, for anyone with an accent, for anyone (of) color, for anyone who identifies as a woman, these are challenging times.”

In order to give King’s legacy its proper due, Hinojosa said she decided to frame her address as a letter to the civil-rights pioneer about the impact his work had on her life, especially as a Mexican immigrant growing up on Chicago’s south side.

“The African-American and the black experience are central to who I am,” she said.

The civil rights issue of this era is immigration — which she noted is not just a “Mexican issue” as so many contend, while federal detention centers fill with individuals who are African-American, Afro-Caribbean and Afro-Central American, Hinojosa said.

“Imagine what is like to be a prisoner in a federal detention center where there are no legally binding standards, and where we are seen as an illegal people” she said. “We have people now in this moment, not too far from here, being held and they may not know why they’re being held. … Basic due process is being denied and being tested on people whose only difference between you and them, not me because I’m one of them, is that they weren’t born in this country. That’s the litmus test: Where were you born?”

The federal centers should be called detention camps, she asserted, since they operate in shrouds of secrecy with little public access.

Meanwhile, the two-day federal government shutdown in January over the Deferred Action for Childhood Arrivals put a spotlight on an issue all Americans should have been paying attention to because it affects everyone. More money is spent on immigration enforcement, deportations and detentions than on all other federal law enforcement agencies combined, Hinojosa said.

Providing a platform for such thought-provoking insights was the goal of the event-planning committee, which has been working to bring in an Hispanic speaker for years, according to Claudia Hernández and Thomas Crews, who are OMSA staff and committee members. When someone suggested Hinojosa this year, the timing seemed perfect, they said.

“With all of the events happening around the country with immigration issues, DACA, … and the makeup of our country, we knew that Maria would bring a unique perspective through her experiences as a woman, an executive producer, a journalist, a Latina, and as a story and truth-teller,” Hernández said by email.

Hinojosa, who has won four Emmy Awards, is the anchor and executive producer of “Latino USA,” a program distributed by National Public Radio. In 2010, she created the Futuro Media Group, an independent, nonprofit organization based in Harlem that produces multimedia content — including a political podcast called “In The Thick” — about diverse communities.

As the home of Douglass, her “journalist hero,” Rochester holds a special place for Hinojosa, who said she has produced several stories about the region. Douglass and King serve are her daily inspirations, she added

“Because if (Douglass) could create his own newspaper, after being born into slavery, then surely I can create my own media company and be the only (Latino) who has an independent, nonprofit media company in the country, right?” she rhetorically asked the audience of more than 200 people.

Yet she said the current political climate can elicit fear of the future — especially among people of color.

“I hear you saying it back to me, ‘You’re all scared,’” Hinojosa read from her letter to King. “This is a moment of challenge and controversy.”

“So where do you stand?” she asked the audience. “For me, as a journalist, I have to put all of this (history) into context. Because being a journalist of color in this country means I am part of a long tradition that in many ways began with Frederick Douglass. And the journalists of colors and conscience in this country have always faced challenges.”

Journalists who reported on lynchings during the 1930s and 1940s or those who wrote about the Japanese internment camps were called unpatriotic or un-American, she noted.

“But who gets to decide?” what defines being patriotic or American, she asked. “This (question) in many ways is about the power of people.”

In her letter to King, she asked how disappointed he would have been to learn that many young, African-American activists on both the left and right sides of the political spectrum gave up their power by failing to vote in the last presidential election after he and Douglass had fought so hard for that right.

“Fight to vote instead because ultimately what we’re talking about is policy,” she said.

Hinojosa also spoke about the power of words in framing conversations about race and immigration. Stories created by her production company do not use the word “minority” because the word denotes people of color as “less than,” Hinojosa explained. She also doesn’t use the word “illegal” to refer to immigrants; illegal is not a noun, she emphasized.

Alexandria Brown, a UR senior studying communications, said she hopes to follow Hinojosa’s recommendations for young people: realize their power, gifts and talents, and achieve their dreams.

Brown also seized on Hinojosa’s excitement about the student’s ambition to become a journalist by asking the speaker for a job. The audience laughed and applauded.

Brown said she appreciated Hinojosa’s conviction. The student said she also loves storytelling and narrative, and hopes to provide a platform for the stories of people of color.

“A long time ago, my people were stripped of the opportunities to learn to read and write,” Brown said. “We don’t have many places to define yourself in this world. You don’t (often) get to tell your own story.”