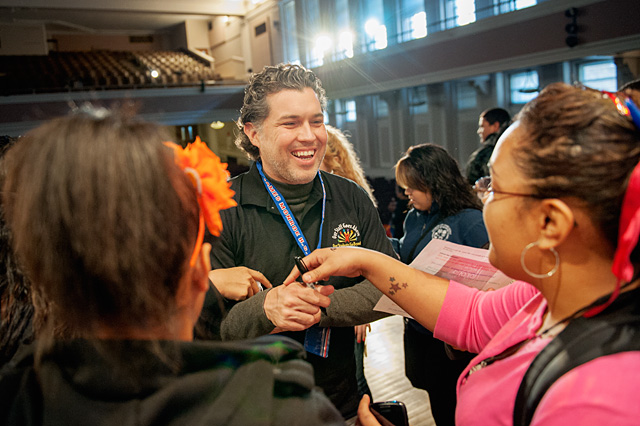 ROCHESTER — Carlos Caraballo wishes every fellow student in the city could hear Ricardo Arnaiz’s story of overcoming the odds to reach his dream of becoming an animation filmmaker.

"They would know that (success) is really possible," said Caraballo, a junior at James Monroe High School who hopes to study graphic design at Rochester Institute of Technology. "Sometimes they feel like they can’t accomplish what they really want. … But it all depends on the effort you put into it."

Arnaiz, a Mexico native who is currently living in San Diego, traveled to Rochester to share his story of how he became a filmmaker and to introduce audiences here to his upcoming film, "El Americano." The bilingual movie was a first-time collaboration for an animated film between Hollywood and Mexico. His visit included stops at the Memorial Art Gallery, the Strong Museum of Play, Monroe Community College and Rochester Institute of Technology, explained Adriana Hoppe, who serves as his Rochester liaison.

During his Oct. 29 stop at Monroe, he told the audience of more than 100 Advanced Placement Spanish, English, bilingual and English as a second language students that he was overwhelmed by the hospitality he received everywhere he went in Rochester. And, he noted, he had never heard of Rochester before receiving Hoppe’s invitation to visit.

That included the warm reception he received at the school where huge applause erupted as he walked into the auditorium.

So at home, he said, that he is considering asking the stars of his new movie — Edward James Olmos and Lisa Kudrow — to come to Rochester for a red carpet event, a proclamation that had the students clapping fervently once again.

He told them that his story began with a dream when he was 6 to tell stories with his drawings, which he was constantly producing. There were no animated films in Mexico in the late 1970s for him to consider what was possible, Arnaiz said.

Unfortunately, his parents could not afford to send him to study animation or filmmaking in New York as he hoped to do, he said. But though he did go on to study graphic design at college, Arnaiz said that he still felt animation was his destiny even though his parents and teachers continued to advise against that career path.

"They say to me, ‘Just be careful. If you fail, don’t feel bad about yourself. It’s going to be impossible to reach,’" Arnaiz added. "I said, ‘OK, but it’s my dream.’"

He also continued drawing characters and developing story ideas, he said. And again, the adults in his life questioned his goal — this time a college professor who urged him to take on a "more serious" endeavor.

Undeterred, he immediately sought work as an animator upon graduating from college, but no one would hire him because of his lack of experience, Arnaiz said. He then decided to create his own studio, Animex, with four friends in the small town of Puebla.

The small band of friends began studying cartoons — pausing and rewatching to learn the tricks of the trade on their own, Arnaiz said. When they completed a one-minute short film, a feat that took two months, he took it to a Miami station head who hired Animex to make 29 more short cartoons, Arnaiz said.

"We were so naive," he said with a laugh. "But we did it. We didn’t sleep for a month and a half. … But if you are trying to do something with all your heart and with all your might, we are Latino and we are so creative, we are willing to do it against all the odds."

Arnaiz said that was the moment he realized his dreams were within reach even after an unsuccessful attempt at a animated movie. His studio’s next venture was making "La Leyenda de Nahuala," which eventually won him acclaim from the film industry in Mexico, he explained.

"I didn’t have any experience at all, but I kept going to figure it out," Arnaiz said. "And what drove me was my passion."

That tenacity again served him well when he moved to California, he said, as he began knocking on doors including that of Edward James Olmos during a visit to Walt Disney Studios. Arnaiz said that he had long been a fan of the actor and was thrilled when Olmos’ son, Michael, asked him to come back and speak with Olmos.

And the four-year project of "El Americano" was born, he said, eventually also signing on Kudrow whom he schmoozed with a special gift of a Talavera vase from Puebla because their small budget could not pay for the huge salary her agent first proposed.

Arnaiz told the Monroe students that Kudrow remarked it was the first time she had ever been presented with a vase to talk about a movie project, which got a laugh from the kids.

"It never would have happened if I hadn’t knocked on the door," he said."I’m living proof that if you dream and you work hard, you can achieve. … Anything is possible when you believe."

That Arnaiz kept the faith, even when things weren’t going well, most impressed Gerrardo DeJesus, a senior with plans to study computer science at the University of Rochester.

"He excelled by believing and having passion for what he was doing, always," Gerrardo added.

Arnaiz’s story also provides Monroe students with an example of great accomplishment by a Latino, he said.

"As Latinos, we think, ‘I’m not going to make it,’" Gerrardo said. "Many times, we’ve seen our opportunities reduced. But he was able to excel. … If he did it, we can do it too."

Principal Armando Ramírez said that not only is Arnaiz a good role model by offering a lesson that hard work pays off, but he also showed what happens when you have a dream and a plan to go with it. Arnaiz also models pride in his culture, Ramírez added.

"The kids were really excited (to hear him speak)," he added. "And any time we can connect the real world to school, that’s important."

Josselyn Ortiz, a 17-year-old junior, said that Arnaiz’s consistent belief in himself also offers a valuable lesson for Rochester students.

"Sometimes, students will drop out and say, ‘I can’t make it,’" he said. "They should think about that (Arnaiz’s message)."