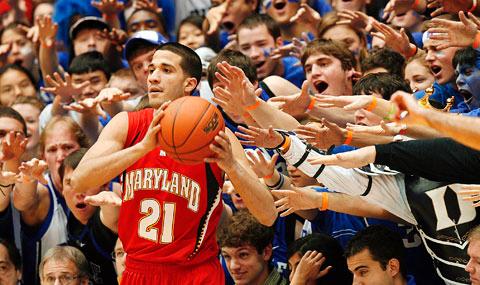 His response: Bring it on.

"Some schools, some fans, really hate me, but … the games are more fun when you have somebody you really hate, and you really want to do bad," said the senior from Venezuela. "I have fun playing the game, and I have fun when fans are yelling at me. For some reason, that motivates me to play even better."

Vasquez, who "tested the NBA waters" during the offseason but opted to pull his name out of the draft, has done his best to raise the ire of opposing fan bases over the past three years. Last season, he became the first player in Terrapins history to lead his team in points (17.5), rebounds (5.4), assists (5.0), steals (1.4) and minutes played (34.6). In the Terps first two wins, he’s off to another balanced start averaging 8 points, 9.5 assists and 4 rebounds.

And he’s never been afraid to share his feelings, whether it was putting a finger to his lips and telling his own fans to pipe down last year when his team was trailing Georgia Tech (the Terps eventually won) — or when he told reporters prior to Maryland’s second-round NCAA Tournament game against Memphis that the Tigers would have a losing record if they played in the ACC, and that they needed some "competition." (The Terps lost 89-70.)

"Those kind of (emotional) players are usually great to coach because most of them are so coachable," Maryland coach Gary Williams said. "They bring the same enthusiasm to practice that fans see on game days. It’s not put-on. You just don’t find many players who have as much heart as Greivis."

Or as much passion to win. In November, the media predicted that Maryland would finish fifth in the league, based mostly on Vasquez’s return. And although he finished second to Duke’s Kyle Singler in the voting for preseason player of the year, he made it clear that he wants to become the new "face" of the league, after the loss of the likes of Hansbrough, Ty Lawson and Florida State’s Toney Douglas.

"I think I can be that guy," Vasquez said.

Especially if it means enraging, then quieting, opposing crowds with his personality and play.

He says his favorite place to compete on the road in the ACC is Virginia Tech, "because it’s just so loud."

But he also can’t wait to travel to Duke’s Cameron Indoor Stadium again — first, because he wants to win there, and second, because the fans like to taunt him in his native language.

"Duke is the best at saying mean things and talking about my country. The good thing is, (a lot of them) say it in Spanish, so I can understand what they’re saying pretty well," he said, grinning. " … And they do their research, because they know everything that’s going on in my country right now. They will know it, and they will make fun of it. In Spanish. So I think that’s funny, that’s interesting, I like that."