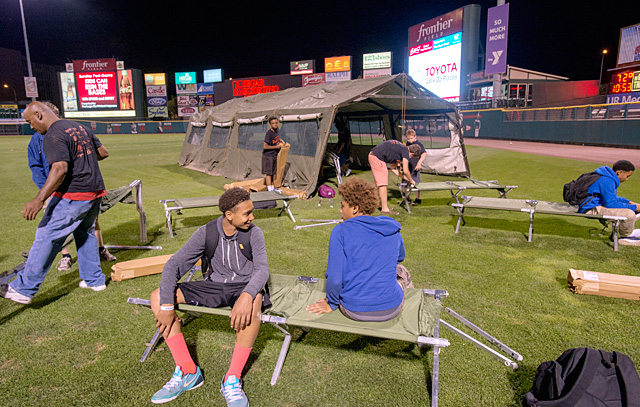 ROCHESTER — Torrential rains may have driven the campers to take cover under the bleachers at Frontier Field, but the goal to help boys at Enrico Fermi School No. 17 get along better still proved successful.

Some of Kelvin Davila’s friends didn’t want him to apply for the first Field of Dreams Urban Campout at Frontier Field July 31-Aug. 1, but he said that he is glad he did, because he had the chance to know more kids, including those with whom he had conflicts in the past.

Romello Hamlet, 13, said that he knows how important it is to help kids in those conflicts, which he said often take place because of racism or students speaking Spanish. The school’s population is 47 percent African-American and 43 percent Hispanic, according to information at rcsdk12.org.

"The kids who are bullied could have suicide thoughts," Romello said.

Easing those racial and ethnic tensions while improving relations between youths and police were the goals of the coalition that put together the Field of Dreams. That coalition included representatives from Rochester, Monroe County, local law enforcement agencies, the Boy Scouts, U.S. Marine Corp, the New York State Police, and local community organizations and private companies.

The 23 boys in grades 4 to 8 who attended were given the opportunity to apply and participate, explained School No. 17’s new principal, Caterina Leone-Mannino. During the event, the boys watched a Red Wings game and later saw the movie "Field of Dreams" on the Jumbotron. But after organizers had set up large tents on the field, the rain began and cots were set up under the bleachers, said Annette Ramos, executive director for the Rochester Latino Theatre Co.

The next morning, the boys broke up in small groups and took part in three stations: brushing up on their baseball skills on the field, playing theater improvisational games with Ramos, and learning about the Rochester Police Department’s mounted patrols, SWAT and scuba teams.

Romello, who also is a student leader at the school, said that he had fun.

Just as significant, the event reinforced community building and conflict resolution practices that the school has been putting in place over the past year, such as restorative practices and peace circles, to reduce tensions among the students, Leone-Mannino said.

They also are creating a student government to instill accountability, she explained.

"We are responsible for one another, not just ourselves," Leone-Mannino said is the main message. "We are building that into the essence of our school."

As a student leader at the school, Kelvin said that he also has learned not to judge others, a message reinforced at home by his mother, Johanna Down-Vélez.

"People in the past you judged, once you get to know them, you become part of them," he said.

Leone-Mannino said that she hopes the boys will carry these kinds of lessons with them as they start a new school year. Those who participated also will be paired with a male role model to continue teaching them about leadership, she noted.

The community work of role models like Moses Robinson, an RPD officer, was key in developing the Field of Dreams, explained David Tennant, a partner with Nixon Peabody. As cochair of a task force on gun violence, Tennant said that he had the opportunity to meet with Robinson. And Robinson’s personal story of physically running away from the violence in his native Philadelphia struck a chord with him, Tennant noted.

Through the task force, he also learned that Rochester has a homicide rate proportionate to Chicago’s, so Tennant said that he wanted to do more. Robinson’s involvement in last winter’s West Side Story Project (http://bit.ly/1UiBntr), which was aimed at connecting kids with theater to address violence, also proved helpful in putting together a team to plan for Field of Dreams.

School No. 17 was chosen for this project because of the Rochester City School District’s work to improve academic and overall conditions at the school, Tennant said. Organizers also wanted to focus on a specific neighborhood, borrowing the Marine motto to "clear, hold and build hearts and minds" in a target area, he said. They eventually hope to include kids from the city’s recreation program at the school, Tennant added. And a parallel activity with School No. 17 girls also is in the works, he and Leone-Mannino said.

"We’re trying to break down barriers wherever they are," Tennant said.