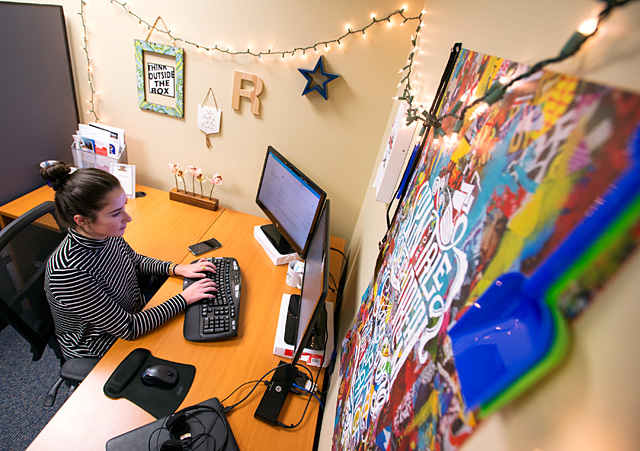 Some local employers say working with millennials poses both challenges and benefits for their organizations, as certain stereotypes about this generation hold true: They think differently and are innovators. They prefer using technology for communication vs. face-to-face contact. They are not afraid to ask for what they want.

Millennials, who represent the portion of the U.S. population born between 1981 and 1997, have now surpassed the baby boomer generation in population, according to a recent report by the Pew Research Center (http://pewrsr.ch/1Ta1G2l). The country is now home to 75.4 million millennials compared to 74.9 million baby boomers, who were born between 1946 and 1964, according to the Pew report.

Also known as "Generation Y," millennials also are perceived as young and brand new to the labor market even though that is not the case for many of them, said Fernan Cepero, chief human resources officer and chief diversity officer at the YMCA of Greater Rochester. A large majority of them are working their way toward management, while another 34 percent have already achieved management status, he added.

Jean-Marc Paquin is an engineer for IV4 in Fairport, an IT support and service provider.

Millennials in general are socially conscious and want careers that make a positive impact on the world even as they also concentrate on career advancement, Cepero said.

"They are very transparent and public about their compensation," he said. "Of all the generations, they tend to be the most open about compensation. They want to know they’re being paid fairly, but unlike baby boomers and Gen Xs (those born between 1965 and 1980) they don’t necessarily see pay as an indication of personal worth."

These generalities tend to be cross-cultural, as he and other employers said they don’t see a marked difference between attitudes and behaviors in Latino millennials.

Latino millennials "are certainly a lot more in tune to social issues and political issues," noted Alvin Rodríguez, who oversees a department of about 20 people at IV4 in Fairport, a local software company. "I do find they are definitely more in tune with what’s happening nationally and internationally."

Millennials, no matter their ethnic origin, are such a touchstone at the moment that Cepero discusses how to effectively manage them as part of a "Strategic Human Resource Management" course he teaches at St. John Fisher College. He has been with the YMCA for 15 years, and two of the five employees in this department are millennials, he said.

Another common characteristic among millennials is a willingness to try out different jobs, Cepero said, so the average tenure in a position is two years.

In addition to offering consistent feedback, employer flexibility in working with this age group also is necessary for effective management and employee retention, added Rodríguez. Half of his department is made up of millennials, he noted. Many of the millennials he has worked with also eventually want to be their own bosses, he said.

"In my opinion, command control doesn’t work for them," Rodríguez said. "I don’t believe in that anyway because it’s not effective."

"As I compare my own group (Generation X), they have more of a need and want for validation," he noted. "A lot of Generation Xers like to work by themselves and be on their own. Millennials certainly are more of the collaborative, think tank, brainstorming types."

Being flexible also is important when working with millennials, as they are not shy about letting employers know they want a work-life balance, noted Rodríguez and Sergio Ruffolo, who owns JR Translation Services in Webster. While his company is small, Ruffolo said he also mainly employees millennials.

"They’re more balanced in their work-life approach, much more than we were," he said. "We were more of the mind-set, ‘You got to do what you got to do,’ vs. Hold on, I have a life.’"

Managers and employees must acknowledge, however, that flexibility in terms of deadlines or completion of projects isn’t always possible so they must communicate expectations, Ruffolo said.

Open communication also avoids a high employee turnover rate, which would be detrimental to a company of his size, he noted. While he may like things done a certain way, his millennial employees may have different ideas and honest conversation avoids conflict, he added. For example, the company now offers live chat with clients thanks to input from one of those employees.

"It’s give and take," Ruffolo said of being an employer.

Chatting online is an example of how millennials tend to prefer digital communication as opposed to personal interaction, which is both a benefit and a hindrance, agreed Ruffolo, Rodríguez and Mercedes Vázquez, who runs a boxing promotion company called Pretty Girl Productions.

Vázquez said her company has many boxers to work with, so she divides responsibilities among her staff members, many of whom are millennials working part time or on a temporary basis. She prefers to interact with her boxers in person, while her employees mainly text and Skype with the boxers, Vázquez explained.

"I’m dealing with a clash between generations," she said. "My hours are long. The concept of 9 to 5 doesn’t exist in my world. They (millennials) don’t do well with nonstructured hours or longer than the traditional 40-hour (work week)."

Ruffolo said he does find himself providing constant guidance on customer interaction because his employees prefer e-mail or texting. He has to remind them that calling a customer is better than playing e-mail ping-pong if an employee is looking for clarification on a matter, he added.