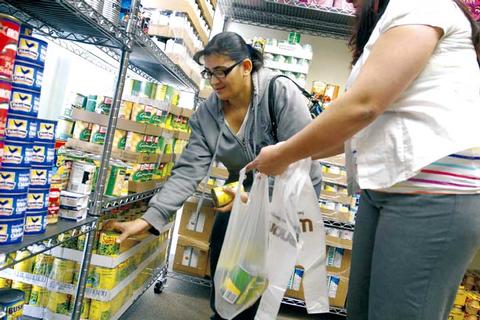 ROCHESTER — The Ibero-American Action League’s food pantry offers more than just food to the people who come through its doors at 777 Clifford Ave.

Staff at Ibero’s emergency services, which includes the food pantry, also provides information about other community resources, helps clients fill out paperwork and even reads their mail. More than 60 percent of its clients are Hispanic, said Elizabeth Robinson, the department’s director. The entire staff is bilingual, she added.

Robinson invites weekly speakers from such organizations as Credit Counseling of Rochester, the Center for Dispute Settlement and the Housing Council and Ibero’s other programs to offer information while clients wait to shop for their groceries.

"We connect people to services and promote self-sufficiency," said Robinson. "Just giving food is not fixing the problems. That’s just a Band-Aid. We talk about other things."

More than 600 families come through the pantry annually, said Robinson. Seven families visit at a time on the three days that the center pantry is open. Food also is distributed on an emergency basis during off hours.

"The numbers have been increasing due to the economy, and we’re seeing more people," Robinson said. "We serve anybody who walks through the door."

The pantry has been a help great help to Donna Lyons of Rochester, who recently had a problem with social services because of paperwork. Robinson’s staff is working to help her resolve it, Lyons said

"They’re good," she noted. "They have a lot of services."

Lyons has custody of a 6-year-old boy who was left at her doorstep when he was a baby. Ibero’s pantry helps her make sure he is well nourished as she tries to improve her financial situation, said Lyons, who plans to return to school and become a social worker.

She said that other food pantries should switch to the supermarket model used by the pantry, which allows clients to come in and choose their own food. The pantry at Our Lady of the America’s ministry center uses a similar model.

Ibero is part of the Foodlink network, which purchases food and delivers it to more than 500 agencies in 10 counties, (more information on Foodlink is available at www.foodlinkny.org/about_faq.aspx). Last year, more than 5 million pounds of food were distributed through this network, Robinson said.

Ibero is one of 73 pantries that allow clients to choose their own groceries in the Foodlink network although, 62 percent of food pantries in its service area offer client-choice services, said Maria Oberst, Foodlink’s resource development manager. Not all of these offer the supermarket model as Ibero does, but 10 more pantries have switched to the client-choice model, she added.

Robinson said the pantry switched to its current model last year in an effort to boost client morale and reduce waste. Now, families "just take the food they’re going to eat," she said.

Shelves are organized by food groups in the pantry adjacent to the office’s waiting area. The size of the household determines how much a person can take of each food group. The pantry also received a grant recently to purchase a refrigerator so that it can offer dairy products and produce, noted Robinson, who said she also has applied for a grant in hopes of geting a freezer for meats.

Cynthia Lawson said the pantry, which has been providing emergency services for more than 20 years, helps her family survive. Lawson and her husband have four children ages 17 to 5. Her husband works at Strong Memorial Hospital, but her job as a home health aide is in peril, Lawson explained.

"Our income is pretty exhausted," she said. "After we pay the bills, there’s very little left. I love this agency, any agency that gives a helping hand."