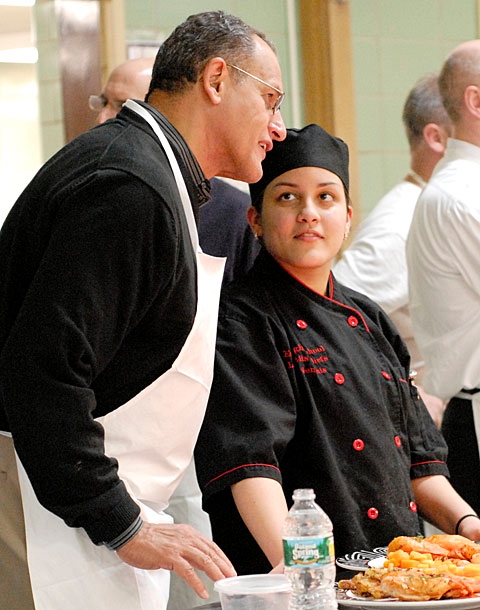 ROCHESTER — Emeterio "Pete" Otero can identify with high-school dropouts who feel isolated, disengaged or bored even though they possess the smarts — as he said he did — to reach academic success.

"I was clearly an outsider," Otero said of his shortened high-school career in Buffalo. "I didn’t fit in. And then I ran with friends that liked the streets rather than liked school."

As a former high-school dropout, the current executive dean of Monroe Community College nowadays relishes his role as mentor — to encourage others to learn from him and not drop out but also to let students know that dropping out doesn’t mean the end. For Otero, it was the beginning of a path that took him from Buffalo to Panama to the hotbed of the civil rights movement and landed him in academia in Rochester.

Academics, though, mixed with business savvy, Otero noted. That is why he was pleasantly surprised to be recognized as the Rochester Hispanic Business Association’s Hispanic Businessman of the Year. Otero will be honored during RHBA’s annual luncheon on Sept. 29.

"But this is not about Pete Otero ‘de momento (in the spotlight),’ " he noted. "This is about a lot of people making it work for me."

Otero was nominated by several people, which is somewhat unusual, explained Grace Tillinghast, who was recently elected to a second two-year term as RHBA chairwoman.

"He is, as I have said before, ‘in a league of his own’" she added. "He has been and still is very active in the community. He is very much involved in an array of organizations and is a longtime contributor to the betterment of the Hispanics in the Rochester area."

R. Thomas Flynn, MCC’s president emeritus, said that he was "extremely proud" when he heard Otero would receive the award.

"There’s no one who is a more giving person and more responsive to the community than Dr. Otero," Flynn remarked.

Otero credits his parents, Carmen and Emeterio, for laying the foundation for his success.

"They’re the ones who taught me to be civically engaged and business-minded," Otero said. "It was always about helping others. … They set the stage."

Even though his father only reached a ninth-grade education, he always ran businesses including a restaurant, a grocery store, a tavern, a Laundromat, even a radio station. And his mother would oversee the day-to-day operations of many of those businesses while his father worked at the Bethlehem Steel plant. Otero has created two scholarships in their honor.

"My dad was a charmer," Otero remarked with a chuckle. "My dad could smile and charm everybody and anybody, that’s my dad. And I’ve got some of those qualities. But my mom taught me how to be tenacious. My mom also taught me how to throw nothing but fastballs."

But as they were often busy supporting their family of seven children, his parents left him to his own devices and he began skipping school. Otero noted that he loved reading and had aspirations to be an astronomer or a chef. But as one of a few Hispanics in his school, Otero said that he felt more camaraderie on the streets.

But then, his sister’s friend talked about serving in the U.S. Army. Otero took that fork in the road and his life was forever changed.

"Despite how people see me now, I was incredibly shy," said Otero, smiling as he acknowledged that most people would not believe that from the gregarious, charismatic personality he so often displays. "The Army is what really brought me out."

Otero said that he persuaded his mother to sign a form that would allow him to enter into the service, as he had not yet turned 17. At that point, one did not need to have a high-school diploma to join the Army, he explained.

The Army taught him discipline and structure, and a corporal encouraged him to take his GED. He did so and passed without even studying, Otero said.

He spent a year and a half in the Panama Canal Zone and moved quickly up the ranks to "buck" sergeant and oversaw a platoon. Then, two events dramatically changed him, Otero said. During the first, he ended up in a physical brawl with a lieutenant over what he felt was an unjust mass punishment for his unit.

"I felt demoralized," he added. "I wasn’t sure what I was going to do."

Soon after, Otero’s 101st Airborne division was sent to Detroit for a week to deal with the civil-rights riots in that city.

"Colin Powell called it a civil war," Otero explained. "It was a war. And I got a good sense of what war was like in that short time."

He said that the time in Detroit also forever changed his views on race.

"I knew what it was like to be Puerto Rican because I felt like an outsider," Otero said. "I didn’t pay attention to the issues of black folks because in my neighborhood there were very few black folks. It wasn’t in my experience. But the military and going to Detroit and watching how black folks were treated changed my sense of social justice."

He completed his service and returned to Buffalo, he said. Initially, he joined his father at the steel plant but soon found himself following a girl to Rochester.

He obtained a job on an assembly line at Bausch & Lomb and worked there three years before wondering to himself, "What am I doing here?"

Otero had become actively engaged in the Hispanic community, and that led to a recruitment job at the former College Cooperative Center. That allowed him to work and obtain his bachelor’s degree in psychology and Spanish from St. John Fisher College. He worked at the center for 10 years — during which time he earned a master’s degree in counseling from SUNY Brockport — before obtaining an admissions job at MCC in 1982. He moved to the Damon City Campus as dean of students in the late 1990s and began work on his doctorate in higher education administration, which he later obtained from the State University of Buffalo.

"I have a knack for understanding students — their preoccupations, what works for them, what doesn’t work for them, and that’s where I wanted to spend my time," he said.

But when the college was searching for a new executive dean of the college’s Damon City Campus nearly 10 years ago, Flynn said that a search was undertaken but he could think of no one better to select than Otero.

"I had watched Otero grow … in professional aptitude and responsibilities which he had received and he became a better administrator as every year went on," Flynn explained. "I was looking for … someone who would be extremely active in the community; someone who would coalesce the community and the community college and bring the two together in all aspects. Not just organizational groups, but business, industry and people, and that’s what Mr. Otero has done the last few years."

The list of his professional and community associations is numerous and includes the American College Personnel Association, Rochester Downtown Development Corp., the United Way of Greater Rochester Community Investment Cabinet, Action for a Better Community, Eugenio Maria de Hostos Charter School and the Rochester Rotary Club. He also has headed up the boards of such organizations as the Ibero-American Action League and the Rochester Public Library Board of Trustees.

He also continues to mentor others, both at MCC and in the community. He sees a lot of students at MCC returning to school as adults as he did, but Otero remarked that he would like to see more.

Roberto Burgos was one of those students. And Otero played an important role in his college education, his longtime friend added.

Burgos, currently senior community housing planner for the city, had graduated from MCC before starting a family and moving on to full-time work, he explained.

I always wanted to go back and get my bachelor’s degree, but I didn’t have the time," Burgos said.

So, he asked for Otero’s guidance. Otero sat down with him and laid out a plan with several options, Burgos noted. With that help and focused attention, Burgos did go on to earn a degree at Roberts Wesleyan College.

"I credit him with that," Burgos said. "I had a lot of self-doubt and worry about how I was going to be able to accomplish this. With a lot of advice and support (from Otero), I was able to go to college."

Otero played a similar role in Eugenio Marlin’s life when Marlin moved to the area from the Dominican Republic 38 years ago. Otero showed him around Rochester and laid out the available education outcomes for him.

"One of his greatest assets is that of mentoring," Marlin added. "He’s done that for a lot of people in the community."

Otero also has shown many people all the possibilities open to a person if they are "persistent and goal-oriented," he noted. Otero himself worked his way up the position he now holds, Marlin said.

"He has that discipline," he added. "I’ve never seen him engage in anything but community work and education since I’ve known him."