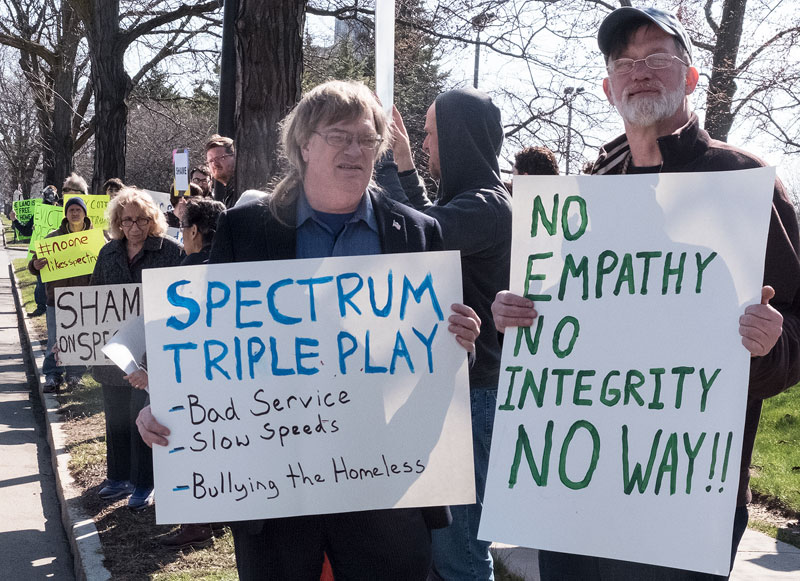 About 75 people picketed in front of Spectrum to prostest the evict of a homeless encampment near the Spectrum offices on April 26 in Rochester. (EMC Photo by John Haeger)

ROCHESTER — Mother’s Day served as the launch for a new “Poor People’s Campaign: A National Call for Moral Revival” in support of the millions of people who still live in poverty five decades after Martin Luther King Jr. created the movement.

Rochester is one of the communities in 40 states taking part in the 40-day campaign, which will culminate with a rally and day of solidarity in Washington, D.C., June 23.

During a “Truth Commission on Poverty in Rochester” held at Redeemer Lutheran Church April 19, the Rev. Emily McNeill, executive director of New York state’s Labor-Religion Coalition and cochair of the state’s campaign, outlined the themes for each week of the campaign.

“It’s a really exciting time to build unity across states, across the country and across communities,” Rev. McNeill said to the more than 200 people gathered for the April 19 event. “Remember, we are in this together.”

According to information at laborreligion.org, the campaign’s weekly themes are:

• Militarism, the war economy and the proliferation of gun violence.

• Climate change, ecological devastation and the right to health.

• Everybody’s got a right to live.

• A new and unsettling force.

To raise awareness of and participation in the campaign, the April event organized by the Rochester Poor People’s Campaign committee included testimonials from people affected by poverty or systemic racism. The testimonials provided at events around New York state show the connections between communities and the commonalities that exist, Rev. McNeill noted.

By participating in the campaign, community members are following in the footsteps of Jesus, who went into the temple and flipped over the tables of the money changers who were profiting off the poor, noted the Rev. James Simmons, senior pastor of Baber African Methodist Episcopal Church in Rochester.

Rev. Simmons and Sister of Mercy Grace Miller from the House of Mercy served April 19 as two of the five truth commissioners — community members tasked with listening and responding to the testimonials from area residents and agencies that work with the poor.

Courtney Rogaski of Rochester gave one of the testimonials, representing the voice of a new segment of the poor population: millennial college students unable to repay loans for degrees in industries that were not hiring after the great recession of 2008, she said. She now earns less than $23,000 a year and has no idea how she’ll ever pay off her college loans.

“People told to go to college and (who have done) everything right shouldn’t be in this situation,” she said.

Part of the reason for situations like Rogaski’s is that workers are not paid a living wage in order to become self-sufficient, noted Bruce Popper, vice president of 1199 SEIU United Healthcare Workers East. Half of Rochester’s residents do not earn enough to be self-sufficient, he added.

The largest of underpaid workers are home health aides and personal care assistants, the majority of whom are women of color, and disproportionately city residents, Popper said.

“The fast food workers rose up, demanded better pay, and won a pathway to a $15 minimum wage,” he said as an example for the health-care workers to follow.

“If you want to know why there was a statistical drop in the poverty rate this year, you need look no farther than the (state) legislated increases in minimum wages,” he said. “It wasn’t counseling. It wasn’t better education. It wasn’t improved transportation. It was not the result of the myriad of ‘blame the victim’ programs. It was larger paychecks.”

Paying workers a decent wage has the added benefit of helping revitalize neighborhoods, which in turn helps families feel safer, he added. And creating equity in neighborhood development is an area of concern for residents of northeast Rochester, according to a statement from Ida Peréz that was read at the April 19 gathering.

Peréz helped form the Scrantom Block Club in recent years to demand residents’ voices be heard and to try to beautify neighborhoods and help eliminate some of the adverse effects for children living in poverty.

“The northeast area, especially North Clinton, has been neglected far too long because we don’t have the money or power other communities have,” she said in her statement. “We are left out or informed way too late of any new opportunities. … (Residents) have lost hope that anyone will do anything to help the area.”

After the testimonials, Rev. Simmons noted that a common thread heard was how people in poverty are made to feel invisible.

Mara Ahmed, an activist and filmmaker from Pakistan, agreed. Dehumanizing people in poverty helps create a sense of the “other,” she explained.

“Once we see ourselves in the ‘other,’ that is when change can be effective,” Ahmad said.