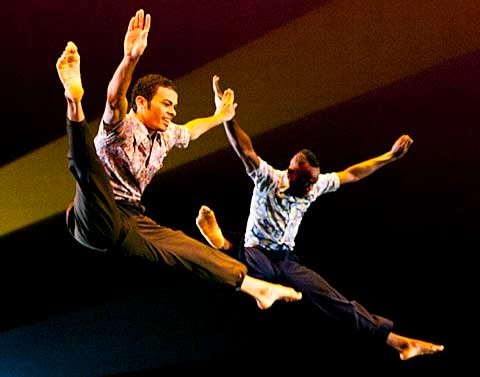 ROCHESTER — His body arched gracefully toward the dance floor as he spun slowly on one leg.

The move was part of a rehearsal in the Garth Fagan Dance studio on Chestnut Street last month — just one of the routine classes and rehearsals that are now part of John Mercado’s life as he learns the modern, disciplined technique created by dance-icon Fagan. Mercado joined the company as an apprentice earlier last year.

Mercado, who began dancing only six years ago with Borinquen Dance Theatre (BDT), made his Rochester debut with Garth Fagan Dance at Nazareth College November 30. Borinquen is run by Nydia Padilla-Rodríguez, who herself had begun dancing as a teenager with "Bottom of the Bucket … BUT," the precursor to Fagan’s current dance company.

Mercado has "come a fairly long way," said Natalie Rogers-Cropper, Fagan’s assistant rehearsal director and principal dancer with the company. "He works hard and is a beautiful performer."

Rogers-Cropper also is director of the Garth Fagan Dance School. When Mercado began taking classes as part of the school’s Summer Movement Institute, she and other teachers asked Fagan to observe him as a potential dancer for the company.

"He’s so young," Rogers-Cropper said of Mercado, who is 20. "In a few years, he will be really wonderful."

It’s incredibly exciting to be chosen to dance for Fagan’s company, Mercado said following rehearsal Dec. 17. He added that he welcomes the opportunity not only to become a better dancer but to meet new people and travel to different places.

And Mercado credited Padilla-Rodríguez with opening the doors to this success.

Padilla-Rodríguez said that when she first received the news about Mercado joining Fagan’s company, she was ecstatic, both as a member of Fagan’s original dance company and as creator and instructor of her own dance school.

"It’s like a dream come true," she added. "A BDT member is living his dream as a professional dancer with Garth Fagan. I am honored and know that John will be an asset to Garth Fagan Dance."

A native of Humacao, Puerto Rico, Mercado moved to Rochester with his mother and sister when he was 14. As a student at Monroe High School, he attended an afterschool program that included a dance workshop by Padilla-Rodríguez. Following that presentation, she invited Mercado and his sister, Cherlyn Mercado, to audition for Borinquen, Mercado explained.

Mercado said he always wanted to dance as a child. His mother, Maika Bermúdez, was an aerobics teacher in Puerto Rico, and he recalled feeling the music and wanting to move when he accompanied her to classes. So, he decided to accept Padilla-Rodríguez’s audition invitation and quickly became one of Borinquen’s best dancers.

"I remember him being very serious, quiet, not speaking much English coming from Puerto Rico," remarked Padilla-Rodríguez. "And (he) was determined to be part of our group because of the cultural connection."

What stood out for her as an instructor was Mercado’s understanding that "discipline is freedom" she added.

"I was impressed with John because he was focused, mature for his age and (he) never complained about anything," Padilla-Rodríguez said. "He worked hard, never gave up, practiced to the point of perfection, and wanted to be a professional dancer."

Barely able when he started out to extend his legs into a second position — let alone do a split — Mercado never let obstacles stand in his way, she commented. He consistently worked on developing the skills to become a professional dancer, she added.

"Through his perseverance, determination and will power, he overcame his limitations and focused on perfection," Padilla-Rodríguez remarked. "He had a great eye for capturing movements, analyzed well and depicted the essence of dance."

Mercado said he enjoyed the intensity of the BDT classes as well as the demanding schedule of three dance classes per week while balancing his school work and finding transportation. He appreciated how demanding Padilla-Rodriguez was as a teacher, as well.

"I liked her and how disciplined and tough she was," he added. "I like being pushed to my limits."

When Mercado was a senior in high school, Ballet Hispanico performed at Nazareth and offered BDT dancers a master dance class, he said. The BDT dancers also were offered the opportunity to attend an intensive summer program in New York City.

BDT sponsored Mercado and fellow Borinquen student LaWanda Hopkins to attend the program, and Mercado said he enjoyed the experience so much that he wanted to move to New York City. He said he also appreciated the fact that the program exposed students to a variety of dance styles, including hip hop, ballet, modern and tap.

Despite his fondness for the Big Apple, Mercado did return to Rochester and began taking liberal arts classes at Monroe Community College – from which earned his associate’s degree — and dance at SUNY Brockport. In 2009, he attended another summer dance program in Puerto Rico.

Following the program in Puerto Rico, Mercado returned to his studies at Brockport until beset by challenges a few months later. His car broke down. He didn’t have the money to continue with courses. But in the spring of 2010, he was offered the chance to take Fagan’s Summer Movement Institute, and he jumped at it. As with Ballet Hispanico’s summer program, BDT sponsored his classes.

The movement institute turned out to be the most intensive of all the training he had done, Mercado said.

"One of the things I really liked was that it was really physically demanding," he added. "This technique makes you push yourself to the limit."

A month later, he was participating in another summer program in Martha’s Vineyard when he received the news that Fagan wanted him to join his company. Mercado said it was an overwhelming experience to make his Rochester debut on the same November night that his mentor Padilla-Rodríguez danced with other Fagan alumni in a special performance at the Nazareth College Arts Center.

"I looked at them and thought, ‘That’s how I’m supposed to do it,’" Mercado said with a smile.

The hard work and determination those dancers displayed — as well as the support of mentors, family and friends along the way — have proven to him that dreams can come true, Mercado added.

"If you really want it, you can get there," he said.