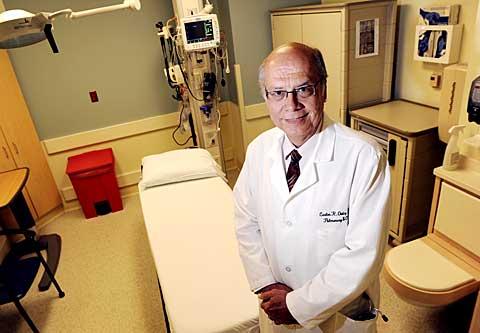 CANANDAIGUA — Dr. Carlos Ortiz grew up with a strong affinity for science and math, so it made sense for him to pursue a career in medicine. But he also had a very personal reason.

While Oritz was growing up in Puerto Rico his uncle died of cancer in his 40s, and subsequently several other family members were diagnosed with cancer, Ortiz explained.

"I figured I would put my tendency toward science for something that would be helpful to my own family and to my fellow man," he said during a phone interview from his office at F.F. Thompson Hospital, where he is senior vice president of medical services and medical director.

Earlier this spring Ortiz was recognized for his work in improving health care for Latinos when he received the Hispanic Health Leadership Award from the National Hispanic Medical Association during its 14th-annual conference in Washington, D.C. Ortiz said that the award was a great honor, especially since it was for doing something he loves.

Dr. Constantino Fernández, a Nicaragua native who practices primary gynecological and obstetrics care, nominated Ortiz for the award. The two have been colleagues for more than three decades, but they got to know each other better when they collaborated on a Latino Health Symposium five years ago, said Fernández, who also is a clinical associate professor at the University of Rochester.

"Many Hispanics in Rochester suffer with asthma … and he is one of the leading doctors in that area," Fernández noted. "He is an exemplary person and a consummate professional. In his area of expertise, he has done so much to educate the community about asthma and other health topics of importance to Hispanics."

"He is an excellent physician and a great humanitarian," said Dr. Michael Finigan, who first became acquainted with Ortiz 35 years ago.

Finigan, who works at the Mary Parkes Center for Asthma and Pulmonary Care and is professor of clinical medicine at UR, worked alongside him at Genesee Hospital. He served as an excellent role model, Finigan added, due to his ability to oversee the ICU and provide training coupled with his compassion toward families.

"He was at the cutting edge of developing acute care respiratory-wise in this community," Finigan added. "He dealt with very severe sick patients and upset families. And Carlos did a great job taking care of the patient and a wonderful job talking with families about the illnesses."

Ortiz said that the ICU job gave him beneficial administrative experience, which later led him to become president of Genesee Hospital in 2001. In 2000 he also became comedical director of the Mary Parkes Asthma Center.

"When you’re in the ICU, you have to coordinate a lot of services," he explained. "You touch on every part of the hospital."

Because of those administrative skills he acquired — which were in addition to his teaching work as a professor at UR’s medical school — when the job opened up at Thompson four years ago, he decided to put his hat in the ring.

"When I thought about it, I’m at the stage in my life where I don’t need to do more medicine," said Ortiz, 61.

As it turned out, "retiring" from practicing medicine daily turned out to be more time-consuming than expected, but it’s a challenge Ortiz said that he enjoys.

"I feel I affect the outcomes of more people than when I was on a one-to-one basis," he added. "I can decide on programs to take care of this and that. It’s mostly problem solving."

In addition to working between 50 and 70 hours a week, Ortiz also finds time to be involved with several committees including the Latino Health Coalition, the Greater Rochester Health Foundation and the Finger Lakes Health Systems Agency. He was a member of the Robert Wood Johnson Foundation’s national advisory committee for the Improving Asthma Care for Children Program.

Through his committee work, he also strives to better serve the needs of Latinos and address the disparities that prevent Latinos from the health services they need.

"We need to have a certain strategy that is culturally sensitive to the group," Ortiz remarked. "Otherwise, the outcomes are pretty bad in what we’re seeing including unnecessary hospitalizations, advanced disease and amputations (as a result) of diabetes that could have been avoided."

Dr. Gladys Velarde, a cardiologist specializing in women’s care who codirected a Latino symposium with Ortiz, called him a strong leader for the Latino community.

He is "a professional of the highest caliber who cherishes his roots and culture; a true role model for other Hispanic professionals and for Hispanics in general," she added.

No matter what he does, Ortiz said that he never forgets his roots.

"I make a point with whatever I’m involved in … that I represent the Latino community and speak on their behalf," Ortiz remarked. "I try to make sure that I’m a good role model."