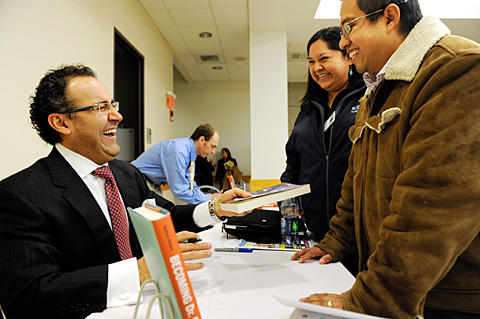 ROCHESTER — Dr. Alfredo Quiñones-Hinojosa often marvels at his story of reaching the American dream, going from a migrant worker at age 19 to a neurosurgeon working at Johns Hopkins today.

Quiñones-Hinojosa made his remarks during the second-annual Tana Grady-Weliky, M.D. Lecture on Women and Diversity in Medicine. He also was keynote speaker for the Jan. 26 I AM MEDICINE conference to recruit minority students into medicine.

During his Jan. 25 talk — which focused on the need to solve health disparities based on ethnicity and race — he noted that interest in medicine began in Mexicali, Mexico, thanks to a grandmother who served as the village’s curandera (healer).

His grandmother delivered babies and basically provided health care to the indigent people in his small, rural community.

"I never realized it runs in my blood, but I was always interested in helping other people," he said. "And I continue to be interested even as a brain surgeon as a humanitarian, as a crusader against injustice in our country."

To follow his dream, Quiñones-Hinojosa jumped the fence into California in 1987. He found work as a migrant worker, painter and welder. But, he said, he knew he was meant for something more so he took English classes and eventually received a scholarship to the University of California at Berkeley. He tutored other students in physics and calculus to pay for school expenses.

"There are so many opportunities for people who are willing (to work), who have dreams," he remarked. "And this country still thrives on the principle that if you work hard, if you have passion, I promise you, you will succeed. It’s not rocket science or brain surgery."

But, he noted, the times have changed since he arrived in this country illegally. He said that he was fortunate to apply for a worker-authorization program in California that allowed him to stay and eventually realize his goals.

Now, the pendulum has swung the other way and he feels for the migrant workers who struggle against such strong anti-immigrant rhetoric, he added.

What hasn’t changed, he noted, is that the people in so many Latin American countries remain as poor as when he came to the United States. And this country has a labor shortage for such jobs as farmworkers, yet Americans don’t want those jobs and this country doesn’t want the people that do, he added.

"I think we need to go back as a society and say how can we make it better for our people and the rest of the world," he said.

Until this country does something about its immigration laws, he has a message for the young people who share the passion he had to create a better life for themselves and their families.

After completing his own medical studies at Harvard, Quiñones-Hinojosa did doctoral work at the University of California at San Francisco where he met Dr. Edward Vates, a neurosurgeon at URMC.

The two became lifelong friends, and Quiñones-Hinojosa has lectured at URMC in the past, Vates said. Because of those visits, the National Student Medical Association that organized the I AM MEDICINE conference invited Quiñones-Hinojosa to speak at this year’s event on Jan. 26, said Vates.

He said that he then worked with the student association to arrange for Quiñones-Hinojosa to also speak at the second-annual Tana Grady-Weliky, M.D. Lecture on Women and Diversity in Medicine.

The hope is that when minority students hear Quiñones-Hinojosa’s story, they will be inspired to consider medicine as a career no matter their own circumstances, Vates said.

"It’s important to get the best and the brightest into medicine, and we need to consider every opportunity to get people who are truly inspired to make health care better," he said. "Alfredo is someone who has let no barrier stand between him and his calling."

More than 200 students from area high schools and colleges attended the I AM MEDICINE conference, said David Paul, a third-year medical student and member of the National Student Medical Association.

The daylong event allowed students to interact with doctors in various specialties as well as have lunch with the physicians, Paul explained.

The fourth-annual conference exposes minority students to information and personal connections as well as informs them of the resources that may be available to them if they decide to pursue a medical career, he added.

And having a speaker like Quiñones-Hinojosa should serve as great motivation for reaching whatever goals a student may have, Paul said.

"Just his drive and his passion to be the best he can be is really inspiring," Paul added. "And he did it against all the odds. So you look at yourself and say, ‘What’s my excuse?’ There is no excuse. That’s really empowering."

Santos, who also is Latinas Unidas’ board president, brought 20 high-school and 15 college students to the conference.

Quiñones-Hinojosa’s point that few Latinos could get to him for care if they were diagnosed with brain cancer resonated with Santos.

"I liked his message about access and doing more and giving back," she added. "Those are the roles I’m playing. … We have a responsibility to (our students). They are our future."