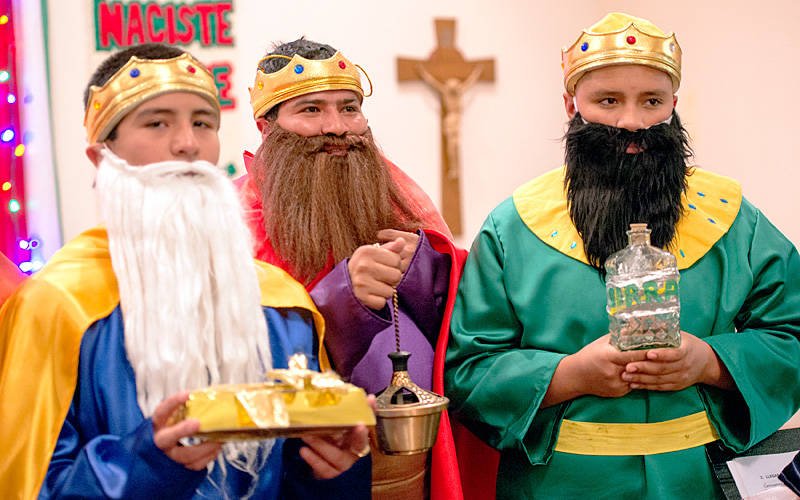 The Three Kings are seen during a 2016 celebration. (EMC file photo)

Despite the current climate brought on by the COVID-19 pandemic, the Three Kings will be visiting Rochester this weekend.

Latinas Unidas is hosting its annual Nuestra Cultura, Nuestra Salud (Our Culture, Our Health) event Jan. 9, which will feature los Tres Reyes (The Three Kings) handing out toys as well as health goody bags for the registered families in attendance. Due to COVID-19 restrictions this year, the event is being conducted “drive-in style,” and walk-ins will not be allowed.

“I am excited this is possible and that we could do something like this for the community despite everything (with the pandemic), ” said Raquel Serrano, chair of Latinas Unidas’ communications and community engagement committee.

Families who registered online were allowed to select a five-minute time slot between 10 a.m. and noon and were emailed instructions for participation in and the location of the event. The Three Kings and members of Latinas Unidas will hand out toys, which were provided for the third year in a row by Toys for Tots. Families also will receive goody bags containing health information and other related items provided by such local businesses as RG&E, Five Star Bank and Monroe Community College’s Collegiate Science and Technology Entry Program.

Serrano said the Kings will be portrayed by Rochester firefighter Santos Cruz, Henry Rivera from Rochester Against Impaired Drivers and Jorge Luis Sierra, who is a member of Ibero-American Action League’s Centro de Oro. The event will serve a total of 24 families and more than 50 children, Serrano added.

Presenting the Nuestra Cultura, Nuestra Salud event is just one of many ways in which Latinas Unidas is continuing to serve the community and keep in touch with its hermanas (sisters) despite the pandemic.

The organization announced in March that it would be switching to such virtual platforms such as Facebook and Zoom to connect with members. Since then, Latinas Unidas has hosted such virtual events as a lecture series and Café con Leche (coffee with milk), which provided viewers with such information as how to use social media to benefit organizations and businesses, in addition to other topics such as mental and physical wellness and domestic abuse. Another virtual series, Sentadas en la Mesa (Sitting at the Table), featured Joanna Santiago, president of Latinas Unidas, who would host interview sessions with different members of the community.

“We were concerned that the pandemic would cause disconnect,” Serrano said. “So, we had to think on our feet, but at the same time strategically on how to get everyone on board (with virtual events).”

In addition to these initiatives, the organization also encouraged individuals to step outside of their comfort zones by submitting videos in which people would feature their at-home hobbies, such as cooking or crafting. These videos were to be shared with the hashtags “Latinas Unidas en casa” and “Latinas Unidas at home.” According to Serrano, this digital initiative has given members of the organization and the community the opportunity to get to know one each other better.

“This is a good way of communication now,” she said.

The organization has made an effort not only to showcase people’s skills but also to recognize members of the Latino community through Spotlight Sunday and Hispanic Heritage Month Facebook posts. These posts highlighted Latinas who are active members of the community. One Spotlight Sunday caught the attention of more than 1,000 people. It featured Jesselle Rodríguez, who, with the help of her daughters, put together soup mugs with goodies and then delivered them to first responders in the area.

“It put tears in my eyes seeing how happy everyone was to receive the gifts as well as the smile on my girl’s faces,” Rodríguez told El Mensajero Católico.

The idea behind the gifts came from Rodriguez’s Tupperware team, which she said was looking for a way to give back to both the community and first responders.

According to Rodríguez, her daughters really enjoyed putting together the gifts, and although there was a bit of awkwardness when the family first approached first responders while on the job, “everyone’s face would light up,” she said, when her daughters would reach out, soup mug in hand.

“I have enjoyed being able to use this pandemic and craziness happening in the world for some good rather than all the negative that has been going around,” Rodríguez said. “Lifting others up during a time of need fills my heart, and I hope that me doing this with my children will instill giving back and putting others first.”

EDITOR’S NOTE: For more information about Latinas Unidas and its events, visit https://latinasunidas.org.