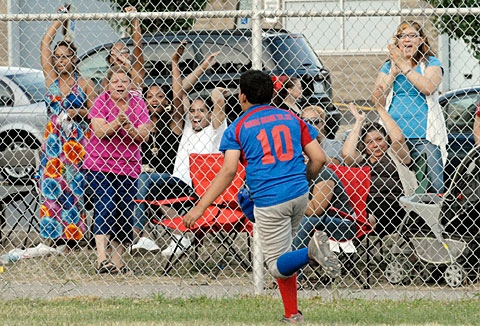 ROCHESTER — Mother Nature rained on the parade for the Rochester Hispanic Youth Baseball League — literally, but not figuratively.

The steady rainfall on June 4 did not dampen the enthusiasm of players, coaches and family members as they marched down North Clinton Avenue to kick off RHYBL’s 16th-annual season.

The players — decked out in colorful uniforms of orange, yellow, purple, red and royal blue — shouted cheers for each of their teams, such as "Let’s go Mets," as they walked down the middle of the street led by a police escort.

The family of Marine Sgt. Javier Ortiz-Rivera, who died in Afghanistan last November, also participated in the parade and wore T-shirts emblazoned with his image. A U.S. Marine color guard also took part.

In honor of his father, 6-year-old Andrew Garcia donned both a Marine uniform and Ortiz-Rivera’s baseball jersey as he threw the first pitch.

Alberto Vargas, the city league’s vice president, presented Ortiz-Rivera’s mother, Gloria Rivera, with a plaque dedicating this summer’s season to the fallen Marine. In 1996 Vargas was coach of Ortiz-Rivera’s team, the Colorado Rockies, when it won the league championship.

"This is truly beautiful," she said as she accepted the plaque.

Joel Alicea, who said that he was proud to be chosen to catch the first pitch from Andrew, has been playing with RHYBL since he was 5 and loves every minute of it.