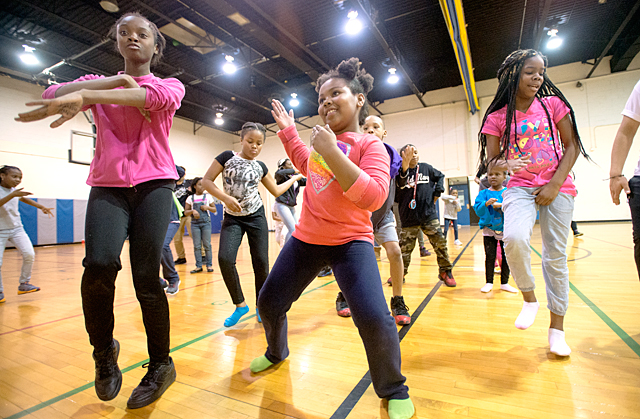 ROCHESTER — Racqueab Overton led a small group through a series of hip-hop dance steps April 21, as music blared from giant speakers in the gym at the Flint Street Recreation Center.

"One, two, three and stop," he said as the music ended and he looked around to see who was following his choreography.

"I got T-shirts for all those who are here with the best effort," announced Jayme Bermúdez as he walked through the group of elementary- and middle-school students.

Bermúdez is leading a new initiative called "Battle for the ROC" to help kids work out aggression and conflicts through dance battles at recreation centers, rather than using their fists — or worse.

"The whole idea is get kids from the community centers and get them engaged, enjoying dance and sweat instead of getting into a lot of trouble," he said.

Bermúdez directs the TruArt dance troupe from Young Audiences of Rochester. His dancers lead the instructional portion of the dance battles, which began in April at participating Rochester recreations centers. The winners from those weekly sessions battle in a main event to be held the last Thursday of the month at the TruArt Dance Factory on Tremont Street.

Lydia Boddie-Rice, executive director of Young Audiences, said the goal is to incorporate the dance-battle program at recreation centers across the city. She and Bermúdez were scheduled to meet with city officials this month to expand the program to all the centers.

"The vision is bigger," than dance, she said.

Breyelle Geiger (left) and Jiera Bavis perform during a hip hop dance off near the end of the April 21 program at the Flint Street Recreation Center.

While dance battles have become popular forums for urban dance globally, Boddie-Rice said that Bermúdez is employing his background in social work to promote the idea locally. These dance battles will offer an outlet desperately needed by young people in Rochester, she said. Bermúdez noted that one-quarter of the homicide victims in Rochester last year were youths between the ages of 15 and 18.

"Young people are asking for things in the community that are geared toward them," he said. "They want something they can easily access where they can express themselves: ‘Be who I am and let go.’ So, our message to the community is: Let’s do something healthy. We are sweating. We are working out, doing healthy things with our bodies and choosing to dance against the violence."

At the beginning of the April 21 session at the Flint center, Bermúdez joined the TruArt dancers in demonstrating a routine they had used to win first place in the second-annual Step UP Spring Invitational competition held earlier in April at Monroe Community College. The routine demonstrated what hard work and practice can produce, he said.

"Battle styles are what are called vernacular styles of dance created by a culture or things going on in the community," Bermúdez explained. "And this is not just happening in the U.S. but all over the world, with a lot of urban dancers, as a way for young people to show their talent, show their skills. Also, they can leave endorphins on the dance floor, release energy and frustration. It’s really like a battle arena."

Jamaya Ingram, 12, took part in the award-winning routine as a recent recruit to the TruArt team. The seventh-grader from the Joseph C. Wilson Foundation Academy has only been dancing for a year.

Jamaya said the dance battles may help kids in the city.

"Instead of being on the streets, they could be here actually doing something (positive)," she said.

Helping more kids in the city is the goal, noted Elton Ward, 18, who dances with TruArt. He said the dance group took him in a few years ago, and he now is being invited to compete in dance battles in other states.

Dance "helped me not just physically but emotionally too," said Ward, who is finishing up a degree at Monroe Community College. "Instead of being upset, I go dance. And at the end of dance, I feel completely better. … (Dancing) helps you express yourself more."

Bermúdez said dance battles are beneficial on multiple levels. A Swedish study of adolescent girls who dance found an increase in self-esteem and improved mental health, according to information at http://bit.ly/1NWUrci.

"It’s healthy to sweat," Bermúdez said. "When you share energy with another individual on the dance floor, you build relationships and friendships."

Kaya Sample, 9, had not heard about dance battles when TruArt dancers went outside on April 21 to invite kids at the Flint center playground to try it out. She said she dances for fun and comes to the center nearly every day.

"For me, dancing helps me get stress out," she said.

Kaya was among the kids who formed a circle following the choreography lesson and began battling each other. Shalonda Phillips, who works at the center, watched the group from the sidelines and cheered and clapped along with the crowd.

"It’s a really good idea," she said of the dance program. "It’s something positive for the youth. …You don’t have to be negative to be cool. And they’re living in a day with a lot of peer pressure."