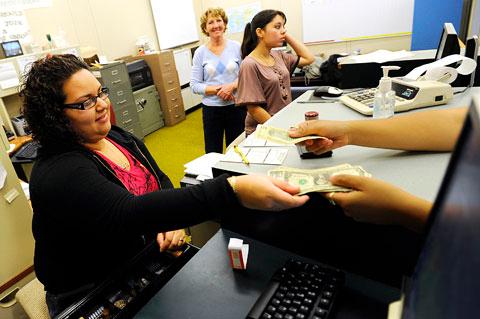 ROCHESTER — A dollar and a dream.

With that small initial investment more than 15 years ago, Sister of St. Joseph Beth LeValley created Progressive Neighborhood Federal Credit Union. And with initial $1 investments from cofounders like Rosa Wims, Sister LeValley’s saw the realization of her dream of providing financial services to people who would otherwise be turned away by traditional banks.

The native of India found herself facing several judgments for unpaid state taxes and credit-card accounts. Having a secure job, she attempted to obtain local bank loans that would enable her to pay the judgments and fix her credit, but was unsuccessful. Upon hearing her story, Catholic Family Center officials this past spring referred Rajasethupathy to Progressive, Sister LeValley said.

"My situation was really bad," Rajasethupathy said. "I thought nobody would help me."

She began one of the financial classes that Progressive offers in its offices at 1130 E. Main St. During the first session, participants were asked to state their financial goals.

"I cried," she said. "My goal was to sleep peacefully. … It was such a hard time. Except for the Lord, nobody is with you."

The credit union helped her obtain an $11,000 loan to pay off her judgments, which has made a huge impact on her life. During a phone interview Oct. 16, Rajasethupathy spoke tearfully as she walked to the Hall of Justice to file a judgment satisfaction letter.

"Sister Beth is truly a Godsend," she said. "If (Progressive) had not trusted in me, I don’t know where I would be."

The classes Rajasethupathy took are part of the Progressive Way to Better Credit, a financial literacy program that includes education on credit and financial planning. The program was created in 2007, Sister LeValley said during an Oct. 15 interview. Part of the credit union’s work is also educating its customer base about how to avoid predatory operators, she added.

The credit union, which became officially chartered in 1996, has several missions:

"The mission hasn’t changed because the needs haven’t changed," added Gloria Edmonds, the credit union’s general manager. "The services we provide, no one else does it. It’s our niche. This is the place of last resort for our population, a reputable place."

Since its inception, the credit union has grown to more than 2,200 members and loaned out more than $11 million, Sister LeValley said. Financial services include auto loans, mostly for used vehicles, personal loans and consolidation of debt. Loan values range from $500 to $11,000. She explained that as part of their ministry, the Sisters of St. Joseph provide some funding to help secure loans.

Progressive is one of the more than 225 credit unions that belong to the National Federation of Community Development Credit Unions, serving more than 1 million low- and moderate-income people nationally, according to Clifford Rosenthal, the federation’s president and chief executive officer. A third of those institutions are faith-based credit unions.

Rosenthal said many of the smaller credit unions in the federation are facing stricter federal regulatory challenges that make operations difficult for even the smallest banking institutions. At the same time, banks have made it increasingly difficult for lower-income people to get loans or obtain credit, he noted.

"Now, more than ever, there’s a need for low-income credit unions and those that operate this niche," Rosenthal said. " Banks … have choked off the pipeline of credit to so many people in the community who used to count on it."

The federation assists smaller operations through training in regulatory compliance, he added. Collaboration such as that afforded through the federation is important to survival, noted Sister LeValley, who pointed to the example of Progressive’s Edison Tech High School program, which offers training for high-school students who run a credit-union branch at the school. With area college partnerships, the credit union also makes matching saving accounts available to high-school seniors through the IDEA (Individual Development Education Account) program, she said.

The credit union also depends on support from other banks and credit unions and faith community members through nonmember mission savings deposits, which are much larger than the accounts of credit-union members and can sit untouched, Sister LeValley said.

"Our members can’t save money like that," she said. "It’s also money we can lend out."

Additionally, the credit union has a program called "Car Loans for Mission" through which supporters can take our new loans or transfer their current car loans to Progressive, which enables it to improve its financial ratios, said Sister LeValley.

Grant support has come from banks, foundations and individual donors as well as from the Diocese of Rochester through the Catholic Campaign for Human Development, and from the Greater Rochester Community of Churches, which has served as the credit union’s 501(c)3 sponsor since its inception. Progressive also receives support from other credit unions, including the St. Pius X Federal Credit Union.

Ann Hynes, St. Pius’ president and chief executive officer, said credit unions are uniquely set up to help one another, whether that’s through lending a teller to another credit union that is understaffed or scaling down their policies to be utilized by customers at a smaller operation.

"Credit unions all started with certain groups being serviced," she said. "Our common bond is faith."

The faith component has been important to members since Father Donald Murphy created the credit union in 1967 with $5 investments from 12 parishioners, Hynes explained.

"He felt the church should have a credit union so the parish (members) could help each other financially the way the church helps you spiritually," she added.

In times of financial crisis such as the one the country is now facing, faith plays a big role as well, Hynes noted.

"In times … when members are struggling, we’re more understanding when it comes to delinquencies," she said, noting that St. Pius will help members who are struggling financially to create payment plans that work better for them. "If you have an emergency, I should be the last thing you are worrying about."