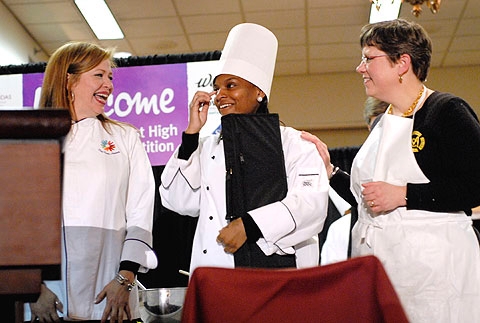 ROCHESTER — The seven East High School students who competed in this year’s "Iron Chef" competition did not race around or show the typical signs of anxiety commonly on display on reality TV cooking shows.

The seven student chefs worked on stage in front of more than 300 people at the Rochester Riverside Convention Center on April 1 as they calmly prepped and directed their sous chefs. The whole time they also were facing the scrutiny of six judges and the glare of lights from cameras from several media outlets and school photographers.

So, when Chef Jeff Christiano, director of the high school’s culinary program, announced that Shakilya Cruickshank had won the first prize of a scholarship to Monroe Community College, her mother interrupted the calm with shouts of surprise and happiness.

After several moments of waiting for her to descend the stage, Lori Hicks was finally able to hug her daughter and whispered to her: "I’m so proud of you. I’m so happy for you."

Cruickshank, a junior, was not supposed to have competed, Cristiano explained. But when the competition drew more sous chefs than expected, he gave in to her to request to be given a chance to prove herself. The 20 sous chefs included Rochester Mayor Tom Richards, Monroe County Executive Maggie Brooks and East High Principal Anibal Solar.

"She is an inspiration to me," Cristiano added.

Continuing to stay cool under pressure as she had during the competition, Cruickshank showed little emotion as she said cooking makes her happy.

"It takes a lot of stress away," she remarked.

Chef Daisy Martínez, who served as a guest judge, said that she was impressed by the composure the students maintained throughout the competition, particularly the girls.

"I never saw these girls break a sweat," she joked.

Martínez, who hosts a show on The Food Network— which also is home to "Iron Chef," on which the East High event is modeled — said that she is amazed at how quickly the East High competition has grown in a short time. She recalled the first time she learned about the program three years ago and saw the potential of creating this event.

Students prepared the food that the crowd ate while the competition was in full swing, served as wait staff, produced television and radio spots that aired in advance of the event, and took photos and recorded the chefs at work to broadcast on giant screens.

In addition to providing such valuable experiences, Martínez said that the competition also gives the students their opportunity to shine and to feel supported by the community.

Martínez said that she also is impressed by the cooking techniques the student chefs are employing each year, including molecular gastronomy. Last year, she went home and researched one of the recipes, she added.

"They’re not fooling around," remarked Martínez.

Genesis Roman, last year’s second-place winner who returned to help out the student chefs, said that besides the cooking, the skills learned during the culinary program and the competition are ones the students can carry throughout whatever path they take in their lives.

"Being organized and being on time to do everything, it’s based on life," she added. "Life is exactly life this. It’s hectic. You have to get used to it."

Roman, who is taking liberal arts classes at MCC, said that she also was happy for Christiano that his culinary program has reached this new level of success with the competition’s move to the convention center.

"This has been the best experience ever," she remarked.