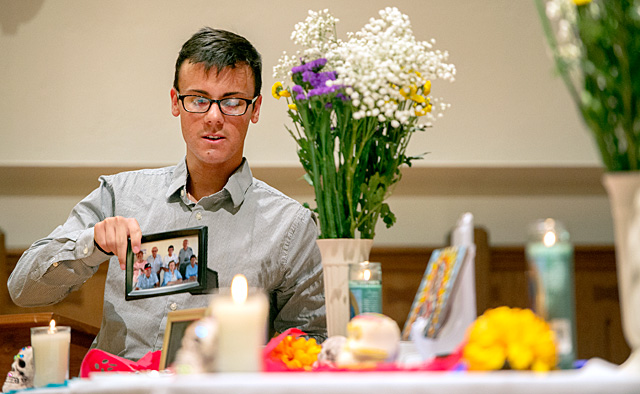 Nazareth College junior Paul Figueroa-Lippert places photographs of deceased family members on the altar during a Day of the Dead service in Linehan Chapel Oct. 28 on the school's campus.

PITTSFORD — For Lori Nolasco, the Día de los Muertos (Day of the Dead) service at Nazareth College had significant meaning for her, as she recently lost her husband.

In his honor, she sang "La Muerte No es Final" (Death is not the End) during the Oct. 28 service at Linehan Chapel that included poetry readings from Nazareth professors and a reflection on the Mexican history of the tradition that is celebrated on Nov. 2.

Nolasco also read a poem, "Lament for the Soul of Machu Picchu," that she wrote after the loss of a friend in 2005. At his death bed, she made him two promises, Nolasco said.

"I told him in my broken Spanish my promise to become fluent," she said. "And that I would go to Machu Picchu."

Adriana Hoppe said that the Day of the Dead tradition, which is rooted in indigenous and Catholic beliefs brought by the Spanish conquistadors, means a lot to her personally. Mexicans celebrate the holiday on Nov. 1 and 2 at cemeteries at the graves of their loved ones, as well as by creating altars with pictures and favorite foods and items of their loved ones.

Ten-year-old Andrea Hurtado (center) and other children make the sign of the cross at the end of Mass celebrating Day of the Dead Nov. 2 at Church of the Epiphany in Sodus. The children were dressed in ceremonial costumes to participate in dances during a celebration afterward.

The community of the Church of the Epiphany in Sodus also marked the Day of the Dead with a Mass and celebration on Nov. 2.

She maintained the custom of creating an altar in her home at this time of year in honor of her father, as well as to educate her two daughters about their Mexican heritage, she explained. Most altars have levels to represent the person’s journey from earth to heaven and include something from the four elements of air, water, fire and wind.

This is the second year for such a service at Nazareth College, said Paul Figueroa-Lippert, who coordinated the event that is a collaboration between Casa Hispana, the Center for Spirituality and the LASMA-Spanish Club. The goal is to expose the Nazareth community to different aspects of the Latino culture, he said.

Professor Esperanza Roncero, chair of Nazareth’s foreign languages and literature department, said that while the tradition is not celebrated in her native Spain, she had learned about it when she lived in California and Arizona.

"I love to see the variety of traditions in the Hispanic culture," she said. "To see that the pre-Columbian roots are not dead. They are here."