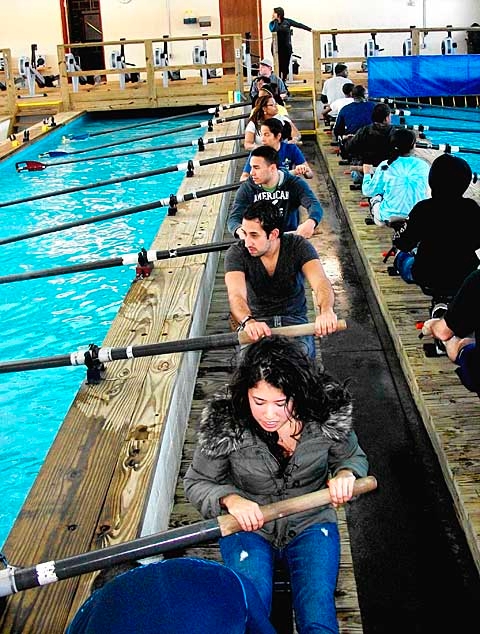 PITTSFORD — A group that started out with just a few friends interested in rowing and making it more accessible to minority groups is now part of the national U.S. Rowing program, which has the same goal in mind.

As part of the national organization’s "America Rows" initiative, Cross Currents Minority Rowing will host the first Diversity Invitational Regatta on the Genesee River this summer. And members of the club will travel to Boston in the fall to compete in the "Head of the Charles" race in Boston.

"It’s the first time we’ll send a boat," said Oscar Pedroso, Cross Currents’ executive director. "It’s one of the most prestigious races in the world."

Last year, Pedroso approached U.S. Rowing, which is the governing body for the sport, in search of fundraising ideas. He just happened to reach Richard Butler, U.S. Rowing’s inclusion manager, who was in the midst of creating America Rows.

"It was one of those things that was perfect timing," added Pedroso. "They’re looking for boats that represent exactly what America is like."

Butler is now serving as a consultant for the group. He also was on hand for the recruitment meeting and open house Cross Current members presented in December at the Pittsford Indoor Rowing Center, where the club trains during winter. The event also marked Cross Currents’ fifth anniversary.

Butler said he was impressed to find a group that not only represented different cultures, but also comprised mainly adults. Cross Currents is one of 1,100 member organizations that constitute U.S. Rowing, he explained. Those groups represent 15,000 rowers, most of them younger than the members of Cross Currents.

Having such an older age range "is really unheard of in our sport," Butler noted. "So to find them was almost like hitting the jackpot all in one boat. It represents what I’m trying to do across the country."

When he spoke with Pedroso, Butler said he also immediately decided to make the club "the national face of rowing." To that end, he plans to help them recruit new members, retain current rowers and consult with them on mentoring youths in the community to actively participate in the sport, he explained.

"The best way to retain kids is to have modeling," Butler said.

He created the America Rows initiative to do what Cross Currents does in representing what the diversity of its community, Butler added. And he doesn’t restrict such diversity to ethnic or physical characteristics; he also aims to ensure potential rowers come from all socioeconomic groups.

Butler said it was time the governing body of the 136-year-old sport addressed the barriers and accessibility issues that keep people from rowing.

"At the end of the day, I and U.S. Rowing would like to see our Olympic boats look like America does," he said.

Nevertheless, the sport has long been economically out of reach for many, which is why Cross Currents offers scholarships so that lack of funding doesn’t keep anyone from giving rowing a try, said Lydia Boddie-Rice, the group’s founder.

"It’s also, to be honest, been an elitist sport that our cultures haven’t been aware of," added Boddie-Rice, who first noticed a lack of participation by rowers of color during her years at Brown University. "We are focusing on diversifying what has truly been a non-minority sport."

Cross Currents began with a small group of nine rowers who were interested in returning to the sport or trying something new, explained Pedroso, who had rowed in college. But it was Boddie-Rice who took the first step by deciding to learn to row from a former colleague at Rochester Gas & Electric Corp, where she served as the company’s public affairs manager. She explained that her former colleague, Dennis Money, was director of the Genesee Waterways Center and was frustrated that so few city residents rowed even though his center was located in the middle of the city off Elmwood Avenue.

While she recruited friends, RG&E became the founding sponsor, and the Genesee Waterways Center provided state funding to create a minority program. Many sponsors have subsequently stepped in to make it possible for the group to offer scholarships for rowing classes and swim training as needed. In addition to eliminating financial barriers, Butler and Boddie-Rice said they do not want a fear of water to prevent anyone from joining Cross Currents.

While they now have an active group of 35 rowers, 125 people have tried rowing with the club during the past five years, and Pedroso said he understands Butler’s point about member retention. Boddie-Rice credits Pedroso, who serves as the group’s coxswain, with increasing participation from the Latino community and from younger members of the community. She said Cross Currents hopes to eventually have a Latino-only boat in competition.

"The sport is definitely growing," Pedroso noted. "But it’s still a small community."

Club members will focus during the next few months on planning the July 30 regatta as well as training a team to travel to Boston in the fall. The regatta is especially exciting, he said, because Cross Currents will host America Rows clubs from all over the country, which will put Rochester in the national spotlight.

"We are a paradigm for the United Nations," noted Boddie-Rice. "(The regatta) is a step toward really living and appreciating differences and coming together for a common purpose. It’s really is exciting, very exciting."

EDITOR’S NOTE: Cross Currents Minority Rowing and Upstate Recovery on Water will host "Rowing for a Reason" on March 19 to raise funds to provide scholarships to rowers who are minorities and cancer survivors. Click here for more information or to make donations.