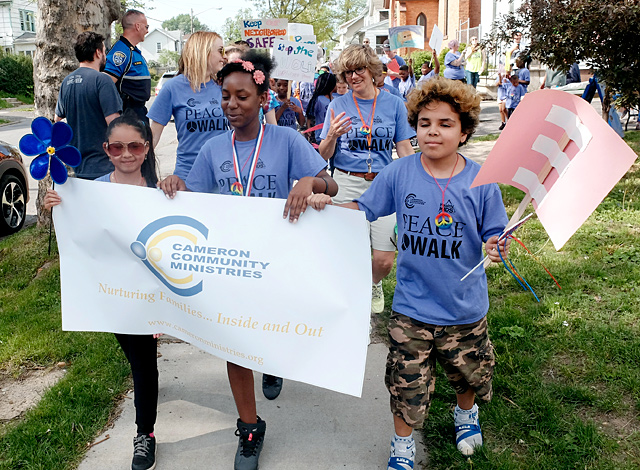 Cameron Community Ministries members begin the 5th Annual Peace Walk on May 18. Organized and planned by the children in the program, the walk for peace and their right to play safe in a safe neighborhood. El Mensajero Photo by John Haeger

ROCHESTER — R.J. Dukes has seen a cousin get stabbed in the neck and an uncle shot as they walked in his neighborhood in the northwest part of the city.

R.J. is 8 years old, and some of the incidents took place four years ago.

R.J. was one of the nearly 40 children and 60 community members who marched in Cameron Community Ministries’ fifth-annual Peace Walk on May 18. The walk was first organized by staff five years ago after a shooting forced them to bring the kids enrolled in their afterschool program inside to play, said Katherine Sime, Cameron’s youth director.

The children were not happy about the change and their response was creating the march, she added. They make signs and help plan the annual event, Sime said.

"Gun shooting, violence, things that are killing people … I want these to end," noted R.J., a second-grader at Flower City School No. 54. "This (walk) is a great opportunity to say that we don’t just stand for peace. We want the violence to end."

He said he wants to be president of the United States in order to find ways for all communities to curb the violence plaguing neighborhoods like his.

"I’m going to make a difference," he stated.

As R.J. and the marchers walked from the afterschool program center on Cameron Street, down Lyell Avenue to the Rochester Public Library and back, they also shouted for peace as cars and fire trucks honked and neighbors waved in support. Representatives from HealthiKids Coalition, a Common Ground Health initiative, also took part in the walk.

Jen Biedeman from HealthiKids said that children in the Lyell-Otis neighborhood experience violent crime rates that are 60 percent higher than the rest of the city.

"That is not OK," she said prior to the march.

She urged city officials to include the creation of more playgrounds that are safe and that also encourage families to stay active and healthy.

Following the march, the kids read poems and essays about what it means for them to feel safe and how violence affects them. R.J. and Kaylee Vo, 9, also sang "Where Is the Love?" by the Black Eyed Peas.

Heaven Adger, 8, explained how her mother doesn’t let her play outside.

"She doesn’t want anything to happen to us," she said. "We need peace in our world."