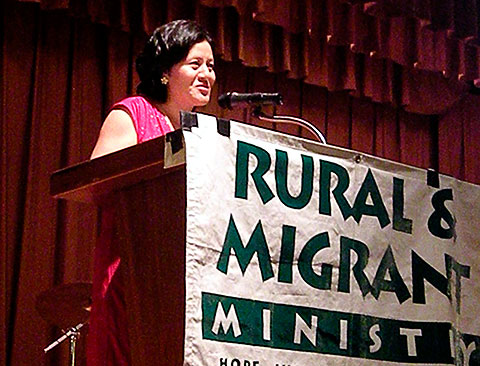 BRIGHTON — Librada Paz came to the United States as a 15-year-old from Oaxaca, Mexico, with a dream to go to college.

Decades later, Paz was honored as a Robert F. Kennedy Jr. Center for Human Rights’ laureate for her work in championing rights for migrant workers through her involvement with Rural & Migrant Ministry. Paz is a board member for the nonprofit organization that serves rural communities in New York state.

Paz went on to make her dreams come true after years of toiling in the fields as a farmworker herself, she said. So, she said that she hopes her award will not only shine a spotlight on the plight of farmworkers, but also inspire farmworkers in New York and around the country to keep the faith that their struggle for rights will be successful.

"I’m looking forward to … go and fight for farmworkers’ rights and really make change happen," said Paz. "I know if I had not come to the United States, I could not have had the opportunity to reach my dream."

Paz will continue to lead the way, as she has done for decades, in calling on state legislators to pass fair labor practices legislation and demanding legislative reform at the national level, explained the Rev. Richard Witt in recognizing Paz during the Harvesting Seeds of Justice Dinner held Dec. 4 at Temple B’rith Kodesh. The Rev. Marvin McMickle served as keynote speaker for the event, which also included a performance from the Justice for Farmworkers musicians.

And now, in light of Paz’s honor from the Robert F. Kennedy Jr. Center for Human Rights, for the next six years the center will support Paz in her immigration-reform efforts. The center has only honored two other laureates from the United States in the nearly 30-year history of the award, added the Rev. Witt, R&MM’s executive director.

Paz represents "the long journey and persistence of ensuring that the voice of the farmworker could be heard not only here in New York but across the country," the Rev. Witt said.

Paz could barely contain her tears when she explained how overwhelmed she felt by the award, she said. And, the experience became especially poignant because she was able to bring her sister and father from Oaxaca to be with her for the award ceremony in Washington, D.C., on Nov. 14 as well as R&MM’s Dec. 4 dinner.

She greeted her family members in their native "Mixteco" dialect when she spoke before the crowd of 175 people during the Dec. 4 event.

"It was very important for me to have my family together," she said.

Paz also spoke of the difficult decision she faced in following her older sister across the border and leaving behind all the culture and beauty of her native Oaxaca. And then, instead of going to school, Paz said that she had to support herself by become a farmworker.

"I ended my childhood on the fields," she said.

She went on to witness the discrimination workers face and the abuses — sexual, verbal and domestic — that women suffer as farmworkers, Paz said.

"Abuses occur and you are alone and afraid," she remarked. "Justice becomes a word without any meaning."

But once she settled in the Brockport area, she was able to find stability, and then graduate from high school and eventually earn her bachelor’s degree in mechanical engineering from Rochester Institute of Technology, she said in a March 2008 story in El Mensajero Católico. She went on to become the director of R&MM’s western New York office.

Her son, Brandon Nieves, is following in her footsteps, not only going to RIT but also working with migrant children at a summer camp, he explained. Paz also has a son, Axel, who recently turned 1.

"She sticks her neck out for what she stands for," Nieves said of his mother. "She is not afraid to put herself out there."

"Librada’s getting this validates the whole (immigration) issue and the work that’s been going on here," remarked Ghertner, who also serves with Paz on the R&MM board for the Western New York Council.

The award "is inspirational to the community, being Latina and being a woman," added Rosario Rangel, who has known Paz for 17 years.

"She has a lot to offer and a lot to learn from for other Hispanic young women," she added.

Paz’s brother, Josefino Paz, said that the Nov. 14 award ceremony in Washington, D.C., was something that no one in the family will ever forget. And he said that he was filled with pride that his sister is following in the example of such civil rights activists as Dolores Huerta. Huerta has been advocating for marginalized communities for more than 50 years, according to www.doloreshuerta.org.

With the support of the Robert F. Kennedy Jr. Center for Human Rights and the added awareness the award brings to the immigration issue among more privileged Americans, the lives of farmworkers will improve, Josefino Paz added.

"(The award) provides a reprieve from the struggle," he said. "It re-energizes us."

Even though she has known about the award since June, Librada Paz said that she is still amazed by the honor. Organizations around the state — such as SUNY Geneseo and schools in New York City — have already invited her to speak, and she expects that kind of work to continue.

"It has changed my life so much," she said of receiving the award.