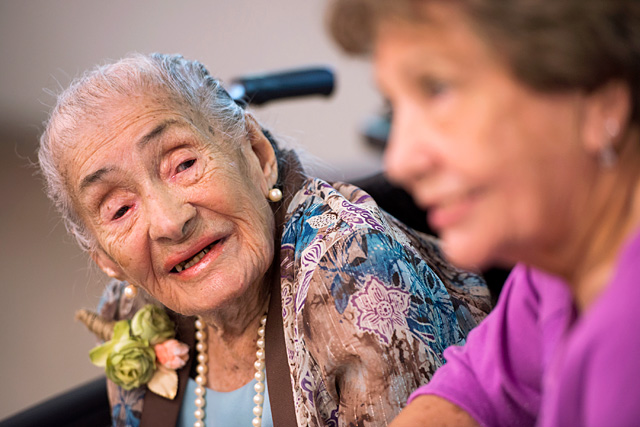 Eleven residents at Rochester's St. Anne Community who have surpassed their 100th birthday's were honored June 9 2016 with a Centenarian Salute.

ROCHESTER — Jesusa Rodríguez said it was not difficult to be the eldest of 12 children growing up in her native Puerto Rico.

"I helped them, and they helped me," she said of her brothers and sisters.

Her easygoing nature is one of the secrets to reaching age 107, said her niece, Carmen Vázquez.

"She was not the type of person to let things get to her," Vázquez said.

On June 9, Rodríguez was one of 11 residents of St. Ann’s Home who were honored during an annual celebration for residents turning 100 or older. Eight of the 11 centenarians recognized during the June 9 gathering sat at tables decorated with such mementos as wedding photos, biographies and certificates.

"These folks … have lived what we read about in history books," said Michael McRae, St. Ann’s president and chief executive officer. "And you never know where you are going if you don’t know where you’ve been."

Rodríguez laughed when her niece told her the residents and staff members had gathered in the community room to help celebrate her upcoming birthday on July 3. The event featured music from St. Ann’s resident choir, cupcakes and a rendition of the birthday song.

"These are my companions," she replied as she looked around the room.

Many staff members and relatives of the other centenarians wished Rodríguez a happy birthday, and most of them also asked her about the secret to a long life. Rodríguez has good genes, Vázquez said, noting that her parents lived into their 90s. She also has outlived eight of her nine brothers — two were twins who died as infants — and both of her sisters. Her youngest brother is 91 and still lives in Puerto Rico.

Rodríguez said the secret is simple: Eating well, being good to your family and faith in God.

"Faith is what’s most important," she said.

During her youth, her family lived off the land raising chickens and pigs in Ceiba, Puerto Rico. She moved to the Bronx in the 1940s, got married and helped raise Vázquez and her sisters, her niece said. Her aunt loved children but was not able to have her own, she noted.

Rodríguez worked as a seamstress, a career of which she is quite proud, Vázquez said. Rodríguez explained that she made dress clothes and wedding gowns as well as undergarments at a factory in New York City.

"I made beautiful dresses," Rodríguez remarked.

She said she learned to sew from her mother, and in her youth, made clothes for her siblings and other family members. As a seamstress, she not only made beautiful clothes, she also wore them well when her coworkers needed a model, she added.

"They chose me (to model for them)," she remarked.

She recalled that her parents became ill in the late 1950s. Since her husband of 10 years had already died by that time, Rodríguez moved back to Puerto Rico to care for them.

Rodríguez left the island to move to Rochester more than 30 years ago, living for the last two decades with Vázquez and her family in Greece. She continued traveling back and forth to Puerto Rico almost every year until she moved to St. Ann’s at age 103.

Rodríguez said she was happiest on her native island.

"My family was there," she said. "And we were together. … I love Puerto Rico more than anywhere else."

Vázquez said she visits her aunt nearly every day and helps with her meals. She often is accompanied by her friend, Isabel Alvárez of Rochester, who attended the birthday festivities on June 9.

"I love her like a grandmother," Alvarez said of Rodríguez. "We are family if not by blood."