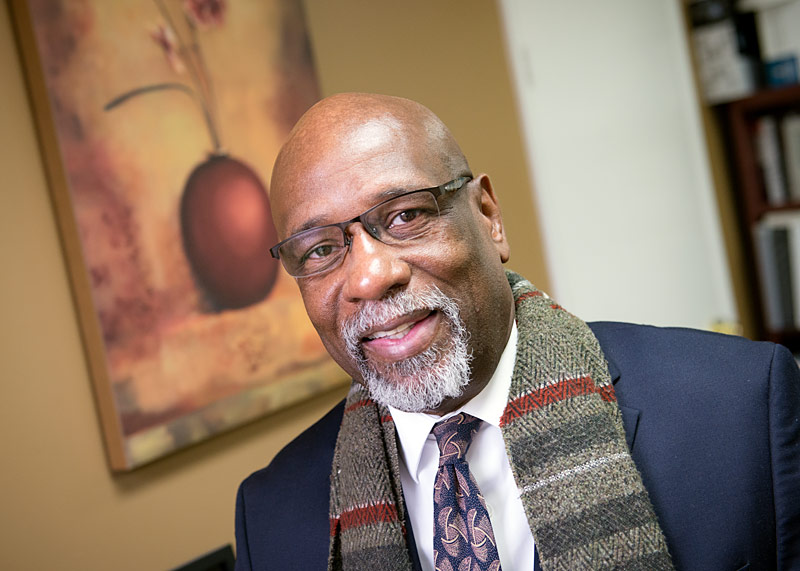 Eugenio Marlin was named the Rochester Hispanic Business AssociationsPerson of the Year earlier this fall.

ROCHESTER — Eugenio Marlin was recognized recently for his tireless efforts to improve the quality of life for Latinos in Rochester, which colleagues and friends say was long overdue.

Marlin, executive director of the Ibero-American Development Corp. (IADC), was named the Rochester Hispanic Business Association’s Person of the Year earlier this fall.

“Winning the RHBA award as a leader in the nonprofit realm is a testament to his devotion to serve the … (Latino) community,” said Miguel Meléndez, who has worked with Marlin for nine years. “Eugenio deserves that award, and much more, for his accomplishments and ability to guide young people, such as myself, in ways that allow me to shape my contribution to our community. (He is) a great example of someone who may not be in the spotlight but who has quietly remained a leader in this community for decades. “

During a Nov. 21 interview at the IADC offices on Clifford Avenue, Marlin acknowledged that he doesn’t seek out the limelight and was humbled to receive the RHBA award on Sept. 28.

Grace Tillinghast wanted to reward that humility and his many years of service when she nominated him for the award, she said. Additionally, she respects that he is a results-oriented leader who also happened to be the first person from the Dominican Republic to receive the RHBA award.

“(Marlin) is a doer, not a talker, a very hard-working person and very humble,” Tillinghast said.

His journey to become a community leader, he said, began soon after he left Haina, near Santo Domingo, at age 20 in the early 1970s. He first went to New York City intending to continue his college studies. But the city life didn’t jibe with him and he moved to Rochester in 1972. Having participated in a youth exchange program in Spencerport and Brockport as a teenager, Marlin had made personal connections at the local Episcopal church were he had worked. He also had a friend from Santo Domingo who had recently settled in Rochester, Marlin said.

He quickly found work at Ibero-American Action League in Rochester in a summer program for youths teaching poetry and theater, said Marlin, 67.

A “perennial student” — having started electrical engineering studies at a college in Santo Domingo — Marlin also took classes at Rochester Institute of Technology. And in 1979, he left Ibero to work for Xerox Corp. for 13 years as a technician in its research and development division. He remained a board member at Ibero, Marlin said.

“My connection with Ibero has been straight from 1972 until today,” he noted.

His parents and siblings followed him to Rochester over the years. He and wife, Carmen, have been married for 24 years and have five children.

In addition to his work, he also loves writing and music and produced a local radio show, he said.

His writing skills prompted Julio Vázquez, who had previously worked with Marlin at Ibero, to return to ask him to return to Ibero as director of development and communications in 1995. Both men are proud of what the agency accomplished in the decade to follow — from opening a family center on Clifford Avenue to expanding the annual Hispanic Scholarship fund and opening the Eugenio Maria de Hostos Charter School. Marlin remains a trustee of the school and has served on boards for several other organizations, including WXXI, the Puerto Rican Festival, the Fair Housing Enforcement Project, the Police-Citizens Interaction Committee and the Alliance for Quality Education.

Having bonded in their dedication to community service, Vázquez considers Marlin one of his best friends. They learned the ropes together at Ibero as rookies in the 1970s, he said.

So good, he joked, that another friend once said Marlin could have been a priest.

“He’s a very spiritual man,” Vázquez said. “But on top of that, he is also a person, a man who has a very high sense of justice. He gets very upset when he sees some kind of … injustice committed, regardless of how big and small. He’s a family man and a caring man. As a result, he’s been a great advocate for social justice.”

Vázquez appointed Marlin to the IADC, he said, as a testament to his leadership skills.

“I knew he would take it (IADC) to the next level,” Vázquez remarked.

Marlin said he is proud of where he has taken the IADC — one of its biggest projects has been the revitalization of the El Camino area in the neighborhoods surrounding Clifford and Conkey avenues. In 2008, with funding from the Greater Rochester Health Foundation, the agency created Project HOPE (Healthy Outcomes through Participation, Education, and Empowerment), he said.

“We understood that you need to get people involved in their community” to make a difference, he said. “Building houses doesn’t make a neighborhood. You have to get residents involved so they take ownership of the things happening around them.”

The efforts have led to the building of a community playground at Clifford and Conkey avenues; construction of 50 affordable-housing units in El Camino Estates and El Camino Estates II; and development of community gardens and block clubs. IADC is now looking to open a community training center and build new and redeveloped housing in northeast Rochester.

Actively working to improve one’s community is a mind-set that he brought with him from the Dominican Republic, he said.

Marlin understands that a community is built up from its strengths and IADC focuses on that, noted Meléndez, the Project HOPE coordinator. Calling him a visionary, Meléndez said that Marlin has served as a great role model focused on the mission of the IADC and providing wisdom and experience, he added.

“I have learned a lot about community development from Eugenio, but more than that, I have seen a great example of humility and commitment every day,” he said. “Eugenio puts trust in his employees. He is fair and he knows when to provide sound advice. He also will not do your job for you. He is great at coaching, guiding and providing accountability.”