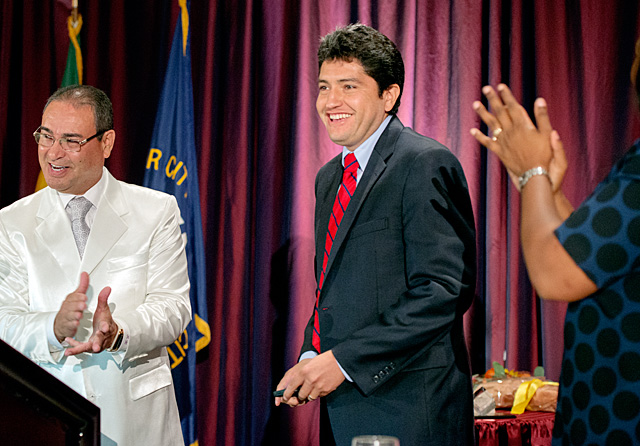 Mauricio Riveros was born to be a leader.

Since childhood, Riveros strived to be the best, earning the highest grades and graduating as valedictorian of his law school class in their native Bolivia, said his mother, Ingrid Quezada.

"Now, he is a professional married to a Rochesterian," she said. "His journey has truly been tremendous."

His mother and brother, Paulo, were in town to visit when the family learned that Riveros was named Hispanic Business Person of the Year. His family, along with wife, Bess, his in-laws and his coworkers from The Pike Co., were on hand for the Sept. 25 award presentation during the 25th-annual Rochester Hispanic Business Association luncheon. Anniversary, businessman celebrated

Last year, Riveros also was named one of Rochester’s "Top 40 under 40.

"I am very proud of my son," Quezada said. "I never would have imagined where life would take him."

Riveros himself could never have envisioned where life would take him, having grown up in La Paz, graduating from law school and finding success as a government official in Bolivia, he said during a Sept. 23 interview at his Pike Co. office in downtown Rochester.

And by life, he means love. Through family connections, he met his wife at a restaurant during her stint as a Peace Corps volunteer in Bolivia.

"It was like first love," he said. "I started seeing what she was doing and I really fell in love."

After getting married in Rochester in 2003, Riveros said the couple returned to Bolivia so he could continue working with the Canadian Executive Service Organization (CESO). The nonprofit network of volunteers provides social and economic development expertise to municipalities throughout the country, according to ceso-saco.com.

Prior to that, he had worked as the vice minister of strategic planning and municipal participation, traveling around the country to create collaborations between towns for such services as health care, parks and road work, he explained.

Riveros graduated at the top of his class from the Universidad Católica Boliviana with a law degree in 1997 and went to work for a short time at a law firm. He later completed his master’s degree in economic law from the Universidad Andina Simon Boliva in 2002 while working with the mayor’s office in La Paz.

While he loved working in public sector reform, Riveros said that the CESO opportunity ultimately helped him extricate himself from the politics of government work.

Also during his time with CESO in 2004, the country had begun heading into "almost a revolution," so his in-laws encouraged the newlywed couple to move to Rochester to start a family, Riveros explained.

"It was tough for me because I have an incredible love and passion for my country," he said. "At the same time, it was a great opportunity for me to help more my country by going out of the country."

So, Riveros made the move even though "I didn’t know anything about Rochester," he said.

Thomas Judson Jr., his father-in-law and chairman and CEO of The Pike Co., helped him land on his feet by introducing him to the construction field. So, Riveros hit the ground running with Riveros Contracting and quickly discovered the challenges of pouring concrete.

"I learned in the field," he said of laying down slabs and floors. "I loved it in the summer and in the spring. I hated it in the winter. … That was a tough experience."

La Paz, where he was born and raised, is a beautiful valley city surrounded by incredible mountains that gets cold, but he had never experienced anything before like Rochester’s freezing temperatures, he explained.

In 2006, a Pike vice president invited him to be a project manager on his team. That led to becoming a director and currently executive vice president of project controls.

It was another executive vice president at Pike, Bill Ketchen, that he named among the mentors in his life during his award acceptance speech.

"He really opened up the arms and gave me the first real opportunity," Riveros remarked. "He said, ‘I want you to grow.’ "

Riveros "is an incredible person," said Ketchen. "He has passion. And when you work with somebody who has passion, it’s very easy to work with that person. He was a great student, very humble and very teachable."

Ketchen encouraged him to really work on his English, which didn’t always come easy. But he knew Riveros had a strong work ethic from the moment he began working with him.

"That honesty and integrity is so powerful," Ketchen added. "As soon as he came to Rochester, he went to work. … He was out in the field. He got his hands dirty and he wasn’t afraid to work."

While still working on his English, Riveros was happy to meet a person who spoke Spanish to him during a Salvation Army fundraiser several years ago. That person was Daisy Rivera-Algarin, an economic development and marketing specialist for the city of Rochester. She also was the longtime president of Latinas Unidas, and she immediately recruited him to be part of an upcoming event.

That led to his involvement with several Hispanic organizations, Riveros said, including Ibero-American Action League and La Cumbre, an advocacy group that he helped create last year.

"This community has a real gem in Mauricio," said Rivera-Algarin. "He has a heart of ‘You are first and I’m last.’ He is an amazing person. … I call him the champion of La Cumbre."

Riveros said that he hopes his work with La Cumbre is helping raise the profile of the Hispanic community. The group opens the doors to anyone with a passion for something to take the ball and run with it, he added.

"La Cumbre has opened up a new perspective of what we can do as a Hispanic community here in Rochester," he noted. "So, I want to be an influencer, not for the purpose of gain. I want to take the individual person out of that. How can we help the Hispanic community be an agent of change, of contribution?"

The amount of volunteerism in Rochester has impressed Riveros about his new hometown and connects him to the public reform work he did in Bolivia in government reform, he said.

Additionally, Riveros serves on the boards of directors for Allendale-Columbia School, where his three sons attend, St. Ann’s Community and the YMCA of Rochester. And most recently, he joined the Center for Governmental Research board.

He also is a deacon at Pittsford Community Church. He said he was raised Catholic and had considered becoming a priest when he was young.

"I love God … he is the driver of my days," he said. "I respect any type of beliefs. But for me, that (spiritual) connection has built an incredible strength, a foundation for what I do and how I live."