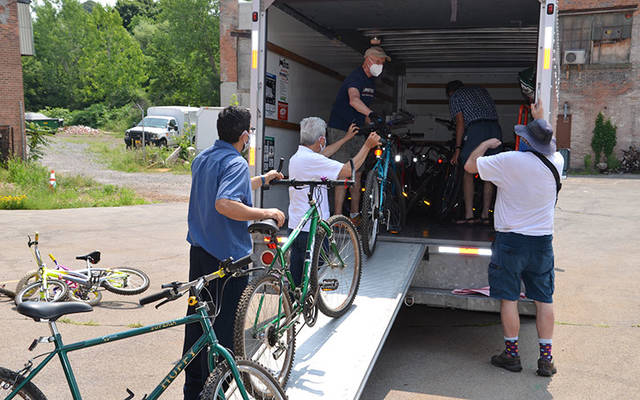 The Diocese of Rochester’s migrant ministry team worked with R Community Bikes in Rochester to distribute bikes and helmets to members of the migrant community in Marion in early July. (Photo courtesy of Carmen Rollinson)

A total of 37 bikes were distributed to adults and children from the migrant community in Marion earlier this month.

R Community Bikes donated the bikes to the Diocese of Rochester’s migrant ministry, which is part of the Office of Pastoral Services. R Community Bikes is a nonprofit organization in Rochester that refurbishes bikes to give to individuals who need them as a means of transportation or exercise.

“They take these bikes and refurbish them to new, not brand new, but in great working order for someone to be able to use them,” said Carmen Rollinson, a Pastoral Services project coordinator.

She noted that some of the bikes were for adults, some were children’s size, some were newer models and some were vintage. The bikes were loaded into a U-Haul truck driven by Father Jesus Flores for distribution throughout the Marion area July 10-12.

Among the recipients were the two nieces and two sons of Aracely Ortiz De Olivera, a parishioner of Mission of Our Lady of Guadalupe in Marion.

According to Ortiz De Olivera, while her 17- and 18-year-old nieces have never owned bikes before, the bike her 7- and 10-year-old sons shared had become too small for them to use. So, in addition to receiving bikes of the appropriate sizes for the boys, the family also gave the boys’ smaller bike to Father Flores to give to someone else in need.

Ortiz De Olivera said that her sons and nieces were happy to receive the bikes, especially since the pandemic had not allowed them to leave the house for quite some time. Now her sons and nieces have the needed transportation to go to the park to ride their bikes and keep active, she said.

According to Bernard Grizard, diocesan director of Pastoral Services, transportation is one of the key issues affecting the lives of migrants. The lack of mobility isolates them and at times prevents them from being able to go to doctor appointments, shop for groceries, and visit family and friends, among other things, he said.

“The bicycles give them a better chance to reach out to obtain what they hope for and gain accessibility to needed resources and connections,” Grizard added.

Each bike recipient also received a brand-new helmet as a result of a partnership between R Community Bikes and the University of Rochester Medical Center’s Injury Free Coalition for Kids. The national coalition offers such programs as bike safety education and bike helmet distributions.

Karen Knauf, program manger of the Injury Free Coalition for Kids of Rochester, has provided R Community Bikes with helmets for years, said Dan Lill, president of R Community Bikes and a parishioner of St. Monica Church in Rochester.

As a result of the COVID-19 pandemic, the R Community Bikes location on Hudson Avenue in Rochester had to temporarily close its doors, Lill noted. Since individuals could no longer come in to select bikes, the organization set out to instead deliver bikes to community organizations that could help allocate them to those in need throughout the greater Rochester area.

According to the Office of Pastoral Services, the migrant ministry has received an additional 35 bikes from R Community Bikes that will be distributed the weekend of July 18-19.