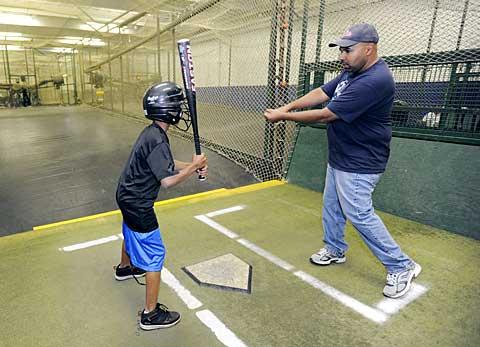 ROCHESTER — Mercedes Soto hopes that when her sons grow up, people will say she was always there for them — including as their coach for teams in the Rochester Hispanic Youth Baseball League.

"I enjoy it," Soto said on June 5 at Don Samuel Torres Park, one of two parks where the league’s games are played. "I like working with the little kids as they move up in the divisions."

Opening day for the league’s 15th-anniversary season had been scheduled for June 5 before rain cancelled the planned parade and games, which were rescheduled for June 12. About 220 city children ages 4 to 15 registered to play this summer, said Carlos Torres, the league president. That’s nearly a 10-percent increase in registrations from last year, with a waiting list of about 20 children, he added.

Its 15th season started out on the right foot early on, he explained, when the league received two grants to purchase new uniforms for all the kids. Quad A for Kids, a local organization that provides athletic and artistic activities for children to reduce social problems for youths in the city, gave the league a $7,000 grant, and the Greater Rochester Health Foundation gave a $7,500 grant, Torres said. The all-volunteer league has a total of 14 sponsors that provide additional funding and in-kind donations for field maintenance and equipment.

The Puerto Rican Festival board has been one of those sponsors for the past two years.

"It’s an opportunity to give back to the community," said Orlando Ortiz, the festival board president. "I used to be part of the league. … And I see the need to have kids get involved in stuff like this versus something else."

Soto said that the league’s $45 registration fee also makes it more affordable for single parents like herself than paying for suburban leagues, which can charge more than a $100 per child.

Since her sons are enrolled in the Rush-Henrietta School District, playing in the league also gives them a cultural connection, she added. Her 15-year-old son began playing when he was 6 and her 8-year-old son when he was 4, so they have long ties to RHYBL.

"I want my kids to see and be with the Hispanic community," Soto remarked. "I don’t want them to forget where they come from."

Soto as well as other parents and sponsors said that one of the league’s greatest impacts is offering players a positive alternative during the summer when youths could get involved in activities that could lead them down the wrong path.

"Being a police officer in the City of Rochester, I have seen all the negative (influences) that the streets have to offer," said Carlos DeJesus, who assisted his older son’s team nearly 10 years ago and returned to RHYBL in 2007 to coach his younger son’s team.

In an e-mail, DeJesus explained that he grew up in the city and his uncle taught him how to play and instilled in him a love for the game, which he aims to pass on to his sons and other players.

"This is what I now try to do with my kids, I mean my team, but I consider them as my kids," DeJesus added. "That is why if there is any chance of me being able to save some of these kids, I want to do it. I believe that I owe it to the community."

That focus on teaching discipline and respect for the game is what RHYBL is all about, said Angel Alicea, the league’s equipment manager who has served the league for more than a decade. In addition to coaching, Alicea also is former league vice president.

"It’s more to promote being a good student and a good athlete," said Alicea, who works for Puerto Rican Youth Development and Resource Center. "Those are the skills that we teach our kids."

He said that the league is the only one locally that runs all summer.

"We don’t want to interfere with school work," Alicea said. "We keep the participants doing something positive through the summer."

That focus on instilling the values of discipline, respect, commitment and teamwork also will make them better citizens, Alicea noted. He said that the league is strict about starting on time, including giving players 15 minutes past game time to arrive or the team forfeits.

"We have to teach the kids responsibility," he said. "Otherwise, kids for the rest of their lives, not many doors will open for them."

The league plays a major role in the Hispanic community, said Angel Cotto as he played catch with his son, Julian, on June 5 at Don Samuel Torres Park.

"It helps them (youths) out with school," he said. "If you want to play, I tell them, ‘Show me your grades.’ It keeps them on track. It keeps them active. And most importantly, they love it."

Also a coach, Cotto tells his team that he’ll be at the park every day at 6 p.m. if they want to practice and most of the players show up, he said.

"I would love to see more sponsors and move volunteers," he said. "We could do something really nice, bigger and better. But it takes a lot of work, and I give credit to the board and volunteers."

Coaches often encourage the children to stay in school and get good grades, which they emphasize will lead to college, Alicea added.

"Our job is to get them there (college,)" Alicea said. "We’re all here for one reason only: to have fun. If we do that, the kids will do great in life."