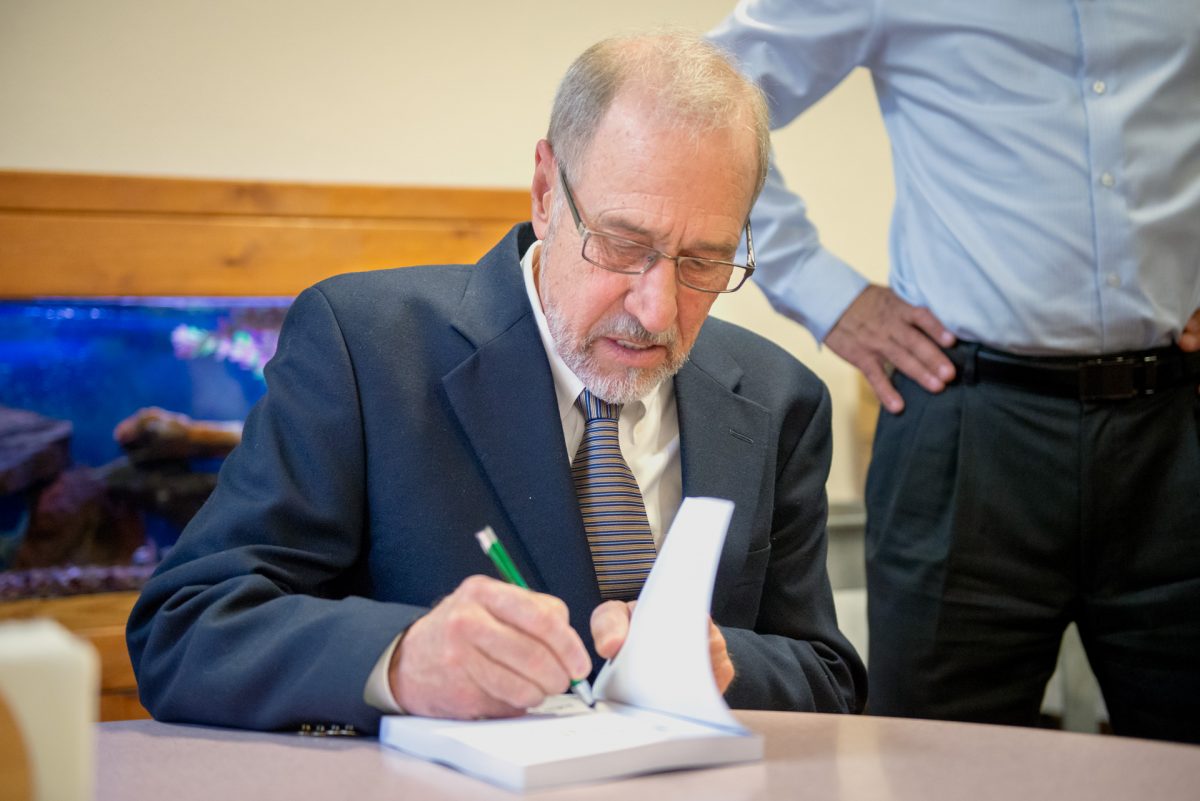 Local author John Strazzabosco signs a copy of his book Ninety Feet Under: What Poverty Does to People during a June 14 launch event at the Mercy Center in Rochester.

Poverty’s negative effects can seem insurmountable. In order to raise awareness about poverty, a local man has spent years studying the issue and compiling a list of 90 ways that poverty affects families. If those 90 ways were addressed beginning with the youngest members of poor families, poverty could be eradicated, noted John Strazzabosco, author of Ninety Feet Under: What Poverty Does to People, told the Catholic Courier during a June 8 interview.

“We are the number one economic power in the world, and a quarter of our kids live in poverty,” he said. “How can we live with that?”

Strazzabosco spoke about his book during a launch event June 14 at Mercy Center in Brighton along with Sister of Mercy Janet Korn and Darrin Griffiths from Word & Deed Publishing.

Strazzabosco first became interested in studying poverty about 12 years ago as a parishioner of Church of the Transfiguration in Pittsford, he said. Transfiguration parishioners had undertaken the 19th Annotation, based on the Spiritual Exercises of St. Ignatius, and the parish also had developed an urban-suburban relationship with St. Andrew Church in Rochester.

He and his wife, Jeanne, began volunteering at St. Andrew’s school drop-in center and also attended Mass at the Rochester parish once a month. Sister Korn said she first met Strazzabosco at the center and was impressed with how invested he became in the lives of the children being served.

“He talked to them, got to know their pains, sorrows, joys,” said Sister Korn. “He really began to study what hurt them, what made them strong, how their home lives influenced them so much … those that had homes.”

“I was interested in learning more … ‘Why? Why has (poverty) not changed for 50 years or more?’” he remarked.

Following his experiences at the drop-in center, Strazzabosco said he developed a presentation to share with his fellow parishioners. Anecdotes of his experiences at the center also are detailed in his book, including one about a young man with whom he has kept in touch and who is now serving a life sentence in prison.

After St. Andrew Church and its drop-in center closed in 2011, Strazzabosco worked with Sister Korn to find research that might answer his questions about poverty. They met with a couple of local doctors who had looked at how poverty affects children. He also studied the work of Ruby Payne, who has written several books about people born into poverty, added Sister Korn.

“After that, he kept asking questions, what happens to people and kept pursuing the whole idea of how poverty and trauma affect the lives of so many,” she said.

He continued his research and added to his poverty presentation, which was being sought out by city and suburban groups and schools, Strazzabosco said. Teachers in Pittsford were particularly enthusiastic about getting the information, he noted.

“They care,” he said. “Most of us, though, govern by our stereotypes.”

So, he began working on a book in 2014 based on his research and presentation in part to help dispel stereotypes about families who are living in poverty, Strazzabosco explained. The presentation included not only the socioeconomic effects of poverty in relation to housing, education and job opportunities, but also the physiological effects of generational poverty. Depression, abuse, fear, a lack of nutrition and a lack of healthy activities all play roles in how brain cell circuits develop or fail to do so, he has explained in his presentations.

For the book, he initially considered writing 90 essays based on the effects of poverty that he had identified, but then he realized his presentation provided a better template for an overview and call to action. He then sought advice on publishing and began e-mailing a sample chapter to various publishers. Along the way, he received positive feedback and encouragement — and several rejection letters — until he found Griffiths from Word & Deed Publishing last fall.

Marlene Bessette, executive director of Rochester’s Catholic Family Center, who read a preview copy of the book, said it highlights what agencies like hers see every day: Those living in poverty, especially multigenerational poverty, have so many barriers to economic progress that start from the day they are born.

“I think the book is most beneficial to those who are distant from the reality of poverty and think that the solution is as simple as ‘people just have to get some motivation and pull themselves up by their bootstraps,’” she wrote in an e-mail to the Catholic Courier. “What we have to be equally sensitive to on the flip side is that readers don’t assume that some of these barriers that start in childhood are a result of poor parenting — it’s not that people in poverty are poor parents, it’s that they don’t have resources but have many stressors that affect their ability to provide adequate supports to their family.”