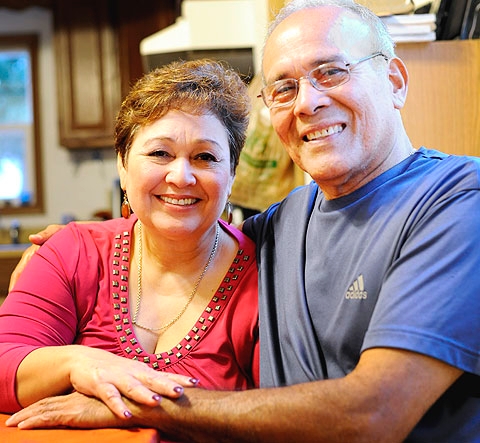 EAST ROCHESTER — Tony and Halyma Chevez moved to Rochester when the Baltimore Orioles signed him to a contract about four decades ago.

Unfortunately for him, he didn’t sign his contract in the era of million-dollar deals and signing bonuses. So, the team got him "for peanuts," joked Halyma Chevez.

But for Tony — who said baseball came naturally to him in his native Nicaragua — to go from playing in his small hometown to playing for the Major Leagues was a dream come true. And the path to the big time took him around the world, he said.

His pitching career, though, came to a premature end when he suffered an injury during his first year with the Orioles. But he and his wife found careers in Rochester and made their home here, they said.

"God had a better plan for me than playing baseball," he remarked.

And about 10 years ago, the couple found a calling in leading mission trips to the people in their native country, added Halyma Chevez.

"They are a wonderful family, a loving family," said the Rev. Art Page, who traveled with the Chevezes on the first mission trip to Telica. "Anybody who goes to their house is always welcome, and they want to feed you right away."

The Chevezes’ adventure from Nicaragua to America began when a then 16-year-old Tony Chevez was selected to play on his country’s team for a Friendship Tournament in the capital city of Managua.

"It was his first time away from his little town," said Halyma Chevez, 58, during an interview at their home in September.

He pitched against Guatemala and his team won, he recalled. From there, he went on represent his country in a World Series tournament in Cuba in 1970. There, the Nicaraguan team finished second and earned a spot in an International Cup series in Palermo, Italy, and he played against teams from Colombia, Puerto Rico, Venezuela, Dominican Republic, Japan, Mexico and the United States.

Back in Nicaragua, he pitched three no-hitters during his home season in 1973, a record that still stands today, Tony Chevez said proudly.

"I played for the love of the game," he remarked. "That is the way I was raised. Our town loved baseball."

In 1973, he also married Halyma. They had met as teenagers when she accompanied her mother, who was a reporter, during an assignment to cover a baseball game that Chevez pitched. When they married, their parents had to give them permission because they were so young, explained Halyma Chevez.

The Orioles had originally signed him when he was 18. He had traveled to Miami for some training before the team sent him to Rochester in 1976 to play with the Red Wings, which was the Orioles farm team at the time. She followed him to the states a year later.

"I had to discover America like Cristobal Colón," he joked.

After a few years with the Red Wings, he was called up the Orioles, Tony Chevez, 59 explained. But he played only for a year with the Orioles because of a shoulder injury, and that ended his time in the Big Leagues, he said.

Only 26 at the time, however, Chevez continued playing a while longer when he got the OK to play on teams in Mexico and Puerto Rico, where he and Halyma even lived for two years, he added.

They decided to settle in Rochester and returned in the late 1970s.

"It was just the people," Tony Chevez said as for why they chose to live in East Rochester. "We were blessed to meet wonderful people here."

He initially worked at Xerox and later found a job at Kronenburger Manufacturing where he has worked for the past 30 years. Halyma Chevez took a civil service exam with the Monroe County Department of Human Services and has worked as a bilingual case worker for more than 28 years.

In their new hometown, they became parishioners at St. Jerome Church but later tried East Rochester United Methodist Church after their daughter started going there. Church leaders were talking about a mission trip and the couple volunteered to help, said Halyma Chevez.

Around that time, Tony Chevez also had received information from his niece about the great need for houses in his native Telica, and the church group decided to travel there, she added.

The Rev. Page, who is now assigned to Salem United Brethren Church in Pennsylvania, said that originally the East Rochester church group thought it was just visiting Nicaragua to place metal roofs on houses.

But when they arrived and saw that the houses were made of sticks and plastic, the work turned to building homes of wood with metal roofs, explained the Rev. Page, whose current congregation also has taken part in mission trips to Telica.

"It was a 100-percent improvement compared to what they had," the Rev. Page added. "The people were in seventh heaven."

The group also distributed clothes and food and set up a vacation Bible school, he added. Halyma Chevez is a wonderful organizer, he said. And from the beginning, she and her husband have taken on the huge task of setting up the trips and putting together fundraisers year round to support the mission, he noted.

The couple strives to raise more than $15,000 for each trip, said Halyma Chevez. They go about every other year with either a local group or a group from the Rev. Page’s church, she said.

Fundraising also become a family project, as their two daughters and son help with the golf tournaments and other fundraisers they coordinate. Several local organizations provide monetary or in-kind donations for the mission, she said.

"She is a great leader and has a big heart," the Rev. Page said of Halyma Chevez. "Tony is a social butterfly and has a lot of family connections, and his fame as a baseball superstar opens a lot of doors. People are eager to meet him and eager to help with the needs. Because of him, we’ve forged a lot of great relationships."

On that first trip in 2003, Halyma Chevez admits that she was nervous. She is from Managua so she didn’t know the town like her husband did. But since that time, they’ve gone from building a handful of homes to more than 20 during trips to distributing so many donations that they have to ship a carrier filled with tons of clothing, food and school supplies, she added.

"It’s really rewarding," she said of the mission trips. "We are blessed more than they are."

Additionally, they partner with several other local churches including St. Joseph Church in Penfield, whose parishioners have traveled to Telica to provide dental care and supplies for families there, explained Halyma Chevez. Members of Morningstar Baptist Church have raised money to purchase land for families to build homes on as well, she added.

"Every year, it (the mission) just grows and grows," said Halyma Chevez.

That growth has included helping students at Miguel Larreynaga School, where the group offers religion instruction during the trips. Meeting with students at the school is where Todd Ranous, a coworker of Halyma Chevez’s, discovered his own calling when he went on the trip in 2008.

After raising money to start a tutoring program, he returned a year later to recruit local teachers who now offer academic support to more than 100 children year-round.

"I love the program and I love the kids," he said. "The program not only gives the kids extra education but also gives them ongoing access to an adult support system."

Carmen Molina, a teacher in Telica, said that the program is a great help to the students.

"They help the teachers as much as the children by providing school supplies; even buying the children uniforms and shoes," she said in an e-mail. "Everyone who visits us every year are very good people that they go to such great lengths to help anyone in need in this town."

Ranous said that he remains grateful that Halyma Chevez signed him up for the trip, even though he was hesitant to go, and admires the couple for all that they do.

"I couldn’t do any of this without them," he added. "They are always there to support me, help pick me up and help me continue to do this program. … God has a way of getting to you. And I’m so glad Halyma got me on the first mission trip."

Molina noted that the impact that Tony and Halyma Chevez have made has been tremendous in leading that volunteer effort to provide housing for people who had none as well as the other programs.

"I feel that Doña Halyma and Tony are wonderful people who give their little bit to help so many people," she remarked.