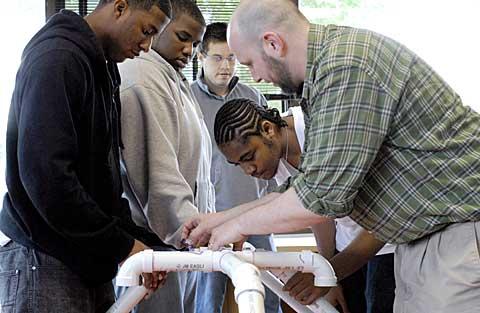 ROCHESTER — The four students bent over the various pieces of PVC tubing and used some muscle — as well as strongly scented solvent — to glue together their sculpture’s "joints."

Once finished, they lifted the life-size cow skeleton and began to talk about placement of the small milk cartons that will eventually serve as the cow’s skin once the sculpture is complete.

The May 18 design meeting was part of the latest arts project by students enrolled in the Rochester After-School Academy (RASA), which is overseen by the Puerto Rican Youth Development and Resource Center at the School of Imaging and Information Technology at Edison. The program, which offers academic support as well as extracurricular projects, has been in place at the school for the past five years, said Ismael Rivera, a program assistant.

"We were using milk cartons, so it seemed obvious to do a cow," said Robert Hoose, an arts teacher at the Edison school who also serves as a program consultant.

More than 77 students are enrolled in RASA at Edison. The program also is run at four other sites in the city in conjunction with four other nonprofit agencies, according to information at www.cityofrochester.gov. Rivera explained that the Edison students cycle in and out of the daily program based on their sports or other activities.

RASA also offers students a 12- to 14-week summer program, Rivera noted. The Edison students will focus on photo and media projects this summer, he said. One of the program’s strengths, he added, is that staff will poll students about their interests.

"We expose them to different things and expand on areas not available to them in the curriculum," he remarked.

Many of Edison’s RASA students took some part in a mural project that went on display at Village Gate last month. Luis Pichardo was one of those students who helped paint the four-paneled mural that measures four feet by two feet. He also researched information on the flags that were painted on the mural, which represented the diversity of the students’ cultures, he said.

"We all got to put our part in it," said Pichardo, a senior. "Nobody really felt left out."

Because of that positive experience, Pichardo said that he was excited to start the new sculpture project.

"This project (requires) a lot of teamwork and organization," he noted. "It puts everybody’s strengths into use, not just yours."

Jordan Rawls said that he likes how the arts projects bring out the students’ creativity.

"We have to use our minds … to see how it comes out in the end," said Rawls, who is valedictorian of his class and has been accepted at Rochester Institute of Technology. "You also have to be extremely flexible … If something doesn’t work, you have to come up with something else."

Rawls joined the RASA program three years ago. He was looking for another afterschool opportunity after his robotics season was over.

"It keeps kids off the streets and out of trouble," remarked Rawls of the program. "You use skills you don’t use everyday and there’s a lot of teamwork also."

"It’s a family-oriented program," he added.