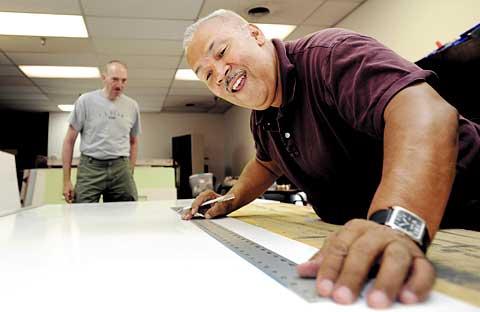 HENRIETTA — Hector Arguinzoni and Joe Levy lifted up and fit side by side two brightly painted yellow panels — along with a white foam core cut-out — to create a replica of a doorframe that would be seen on a street in Old San Juan.

The street scenes will be incorporated into a Latin village set design that Arguinzoni, Levy and several other volunteers will have worked on weekly for two months. These scenes will be the highlight of the fiesta-themed 17th-annual Fire and Ice Gala to benefit the American Red Cross of the Finger Lakes region. The gala will be held Sept. 11 at the Hyatt Regency Rochester and organizers hope to raise $120,000 for its local disaster relief efforts in response to mainly fires, flooding and ice storms in this region , said Jenna Buker, the Red Cross’ development coordinator.

"The Rochester Red Cross responds to an average of a fire every day," Buker noted. "The money raised goes to help clients with food, shelter, clothing and counseling."

On Aug. 3, Buker and the decorations committee volunteers worked for hours producing cut-out silhouettes from white foam core and using glue guns to affix them to the panels. The pieces also were numbered to make sure they will be assembled properly once they are moved to the gala site, Arguinzoni said.

When the project started in June, volunteers were working on hot summer nights in a warehouse without air conditioning, said Nadine Krimow, assistant director for the Red Cross’ marketing and communications. Now, thanks to the employer of one of the volunteers, the project is being completed in an air conditioned work area at National Income Life Insurance Co. on East Henrietta Road, she said.

This is the eighth year that Arguinzoni, director of the Thomas P. Ryan Community Center in Rochester, has volunteered for the gala’s set-design team. He usually comes up with the ideas that are approved by the event committee and volunteers help make it a reality, said Leslie Levy, a volunteer who has cochaired the event in the past.

"We’d be lost without him," Levy said of Arguinzoni. "He’s always so creative. … It looks like we’ve spent a lot of money but we don’t."

The group’s budget this year is $1,000. Each year, they repurpose the panels that this year are serving as Puerto Rican doorways. Additionally, one of the volunteer’s sisters donated shutters that also will be glued to the panels as windows.

"Primarily it’s Hector (who designs the set); it’s what he wants to do," Levy said. "But it’s very much a team effort."

A friend of Arguinzoni and Levy who has since left the area first enlisted their help with the project, and they both have been building the sets ever since, they joked. Previous themes have included Carnival, Hawaii, night and day featuring the New York City skyline, a western town and the 1950s.

"We’ve done a little bit of everything," Arguinzoni said.

This year, with the decorations committee facing additional budget restraints, Arguinzoni decided to incorporate the float he created for the Puerto Rican Festival into the gala’s set design. With his brother and nephew, both named Jorge, and friend Eugene Baez, Arguinzoni built a replica of El Morro for the festival’s float for the Puerto Rican parade on July 31.

The festival committee is loaning to the Red Cross for its gala the float of the famous Spanish fort in Puerto Rico, he added

"We had to find ways to be creative (for the gala’s set)," noted Arguinzoni, who also runs a small set-design business called Winston Enterprises. "The festival committee was very accommodating."

Arguinzoni, who remembers the first year of the Puerto Rican Festival 41 years ago, said that he became interested in the arts as a child. He said that a third-grade teacher, whom he called a "phenomenal artist," encouraged him to continue developing his artistic side.

"You don’t forget those people," he said.

His job in the city’s recreation department has helped him see the value of utilizing his artistic talents to benefit the Red Cross. A family who participated in activities at his center died last winter because of a fire in their home.

"Our kids and their families benefit, unfortunately, from the Red Cross," Arguinzoni remarked. "We have too many fires in the inner city. … But the Red Cross has always been there for them."