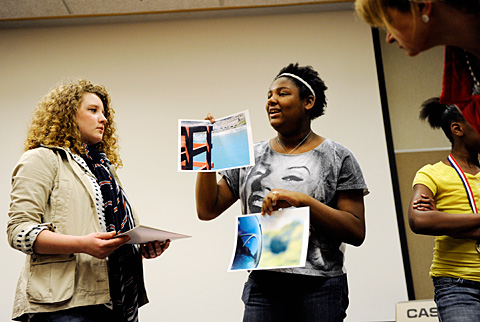 ROCHESTER — Members of the Student Leadership Congress will auction off artwork they created or that was donated to the group to help raise money for a Washington, D.C., trip in June.

"It is so important for students to get out of their back yard," Sophie Gallivan, president of the group and a junior at Joseph C. Wilson Magnet High School, said during an April 24 meeting.

At that meeting, the students displayed their artwork and offered each other critiques on how to improve their work before the student art auction that is set for May 8.

This is the group’s first attempt at an art show fundraiser, said Andy Gardner, a social studies teacher at Nathaniel Rochester Community School No. 3. While he has accompanied other students on the Washington trip, he said that most of the students currently part of the Student Leadership Congress will be going for the first time.

The group is trying to raise $22,000 for 10 students to attend the "Civics in Action" weeklong conference. And the experience goes beyond visiting museums and memorial sites, Gardner said.

"They get to engage in a model Congress and meet kids from all over the country," he said. "And they get to debate key topics. … Last year, it was immigration. This year, it may be immigration again."

Visiting the White House, the U.S. Senate and House galleries, though, are part of the trip and do prove to be exciting for the students, he noted.

Because of those valuable experiences, the district has contributed money in past years as has Close Up, the nonprofit organization that offers the trip, he said. But he would like to see the program become self-sustaining in the future, and the art show is a good step in that direction, Gardner added.

Carlos Caraballo, 17, said that he has always liked to draw and was proud to be donating his art to help the leadership group.

The James Monroe High School sophomore also was proud to represent his school, especially since he was invited to the group based on his academic performance and positive attitude, Carlos added.

"I like to be the one to represent my school and try to make it a leader," said Carlos, who moved to Rochester from the Dominican Republic only four years ago. "I also really like to share with other students."

He said that he is looking forward to personally exploring how the U.S. government works.

"And we’re getting to meet new people, that is what I’m most interested about," Carlos added.