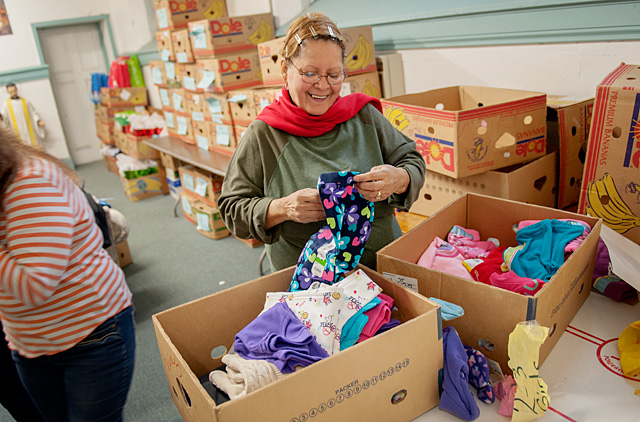 ROCHESTER — Natalia Medero said that preparing Christmas baskets for families in need is a personal endeavor for her.

"A lot of people in our neighborhood are struggling," she said. "I feel bad for them. Doing this, you see how some of the families are really, really in need. I try to write their names down so that next year, I make sure to call those families first. It’s more personal too. I get to know them."

So many people have fallen on hard times that she recently received a call from a woman who had heard about the Christmas baskets on the bus.

The St. Frances Xavier Cabrini parishioner has been working with Sister of Mercy Julia Norton for decades organizing the lists of families, gathering donations and preparing the baskets with other volunteers, Medero explained.

Sister Norton said that the funds she receives from the annual Catholic Courier/Catholic Charities Christmas Appeal help her buy gifts cards to such area grocery stores as Tops and Price-Rite so the families can buy food for their Christmas dinner.

The 44th-annual Catholic Courier/Catholic Charities Christmas Appeal began Nov. 1 and will run through the end of February. The goal this year is to raise $50,000.

Sister Norton said that using the appeal money for gift cards became necessary a few years ago as the basket list kept growing. With more than 120 families signed up this year, she can’t afford to go out and buy food, she said. And she cannot stretch the food donations she receives for the St. Regis Food Cupboard ministry on Bay Street to provide food for the baskets as well, Sister Norton added.

"Twenty dollars is not much, but it helps," she said of the gift cards.

The work of preparing the Christmas baskets with volunteers such as Medero began in the former Our Lady of Mt. Carmel Church, Medero said. Her husband, the late Deacon Felix Medero, also served at the church.

Nowadays, the volunteers gather in a small room off the parish hall at Our Lady of the Americas Church on East Main Street.

In addition to the gift cards, families receive clothing and toy items for children, Medero explained. Those donations come from several area parishes including St. Joseph Church in Penfield, Holy Trinity Church in Webster and Church of the Transfiguration in Pittsford, she added.

But even those donations have dwindled, Medero noted.

"Even churches that have money, they tell us that things are not as good," she said. "(Times) are hard for everyone."