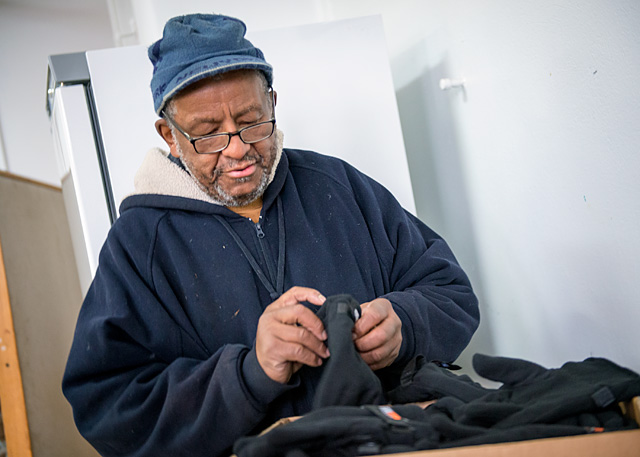 ROCHESTER — Gloves are a necessity for Rochester’s cold and snowy winters, and with help from the Catholic Courier/Catholic Charities Christmas Appeal, dozens of people on the city’s west side will have new pairs so they can keep warm.

Volunteers from St. Peter’s Kitchen, located on Brown Street, handed out more than 130 pairs of gloves to its guests Nov. 22. The ministry, which serves free and nutritious lunches five days a week to those in need, purchased the gloves using a $600 Hunger Relief grant from Catholic Family Center. Hunger Relief grants are funded in part with proceeds from the Christmas Appeal, according to Patricia Lorenzen, St. Peter’s Kitchen Program director.

"It (the appeal) is extremely important. Trying to keep our community warm is very important," Lorenzen said. "This is one of the grants that we can depend on to provide that for our community."

St. Peter’s Kitchen will celebrate 35 years of serving the community next year. Founded in 1982 by Father Richard Czierwin, SSCC, the ministry began as a Saturday soup and sandwich program of the former Ss. Peter and Paul Church before becoming a Monday through Friday lunch program. When the church closed in 2006, St. Peter’s Kitchen remained open and continues to serve lunches to those in need. Today, the kitchen serves an average of 140 meals a day, according to Lorenzen.

"When I first started (at St. Peter’s), we were actually serving more people than we serve now," she said, noting that the reduced number of people coming to the ministry is due to greater awareness of food inadequacy in the area.

Lorenzen said Foodlink has helped the ministry with programs and food to help families. Last year, the ministry worked with Foodlink to establish a community garden. In the first year, the garden harvested over 100 pounds of produce. St. Peter’s Kitchen also held workshops on the benefits of gardening, Lorenzen said. In addition to the garden, St. Peter’s Kitchen also works with Foodlink to host monthly mobile food pantries where people in the community can take home bags of food. The ministry also provide other services, including a thrift store, a Christmas store, and also serves meals for the holidays.

St. Peter’s Kitchen operates with four staff members and more than 150 volunteers, Lorenzen said, noting that many of the kitchen’s volunteers are school groups, businesses and organizations.

"We would not be able to do it without them," Lorenzen said of St. Peter’s Kitchen’s volunteers.

EDITOR’S NOTE: To donate to the Christmas Appeal, make checks payable to Christmas Appeal and send them to the Catholic Courier, PO Box 24379, Rochester, NY 14624. Please include your name, address, city, state, ZIP code, telephone number, and whether the gift is being made in honor or memory of someone. For more information, visit www.catholiccourier.com/christmas-appeal.