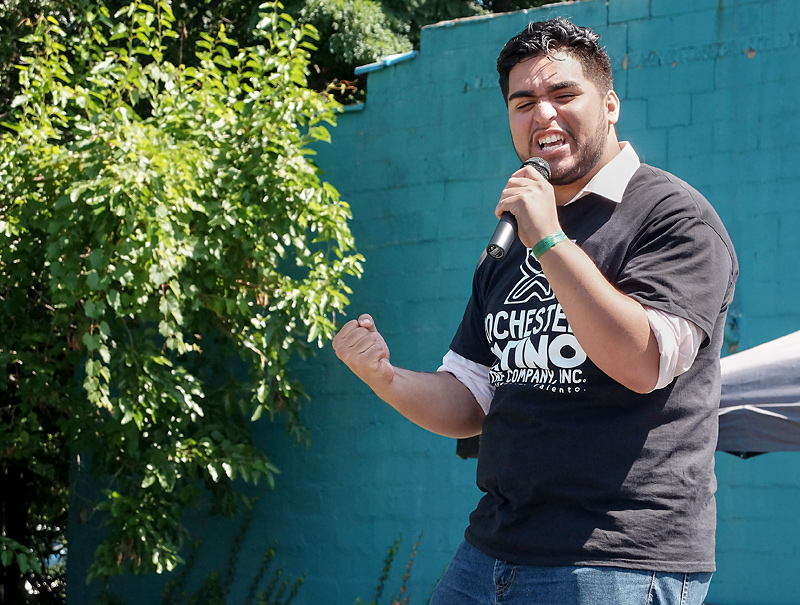 Alejandro Gomez a member of the cast of "In the Heights" perform during the Joseph Ave Arts Revitalzation Festival in Rochester on July 29. El Mensajero Photo by John Haeger

ROCHESTER — Anticipation is building locally for Geva Theatre Center’s season-opening musical production of "In the Heights," which focuses on a tight-knit Latino community.

"I’m so excited," said Stephanie Paredes, cofounder and board president of the Rochester Latino Theatre Co., which is serving as a community partner for the production. "We (Latinos) don’t see ourselves at Geva. This (partnership) will help them (Geva audiences) understand the importance of the story and how it relates to our culture and our community. … Our hope is people will learn the importance of inclusion, not just culturally but also historically."

Even though the show focuses on the Latino community, its story line also has universal elements that appeal to the broader audience that a theater like Geva attracts, noted Buffalo native Alejandro Gómez, who has been cast as "Sonny," a friend of the main character. The show tackles such issues as being the first in one’s family to go to college, parents letting go and dealing with the aftermath of not living up to the expectations of others.

He noted that Lin-Manuel Miranda — who wrote "In the Heights" as well as the hit musical "Hamilton" — "is able to create stories about minorities that not everybody knows about and make them mainstream. Our stories can be just as universal as anybody else’s."

Mary Méndez Rizzo agreed. Although she will play the role of "Camila," the mother of the daughter in the show who is going off to college, she identifies with the daughter role.

"I’m so glad Geva is doing … this story (which) really speaks to the Latino experience in the United States, in New York," said Méndez Rizzo, who is a parishioner of St. Kateri Tekakwitha Parish in Irondequoit. "I identify so much with the community support (in the play), with coming back home and things feel familiar and different."

She also loves the role of "Abuela," the neighbor who is like everyone’s grandmother, she added.

"I love the music," Méndez Rizzo said of the musical. "I love the dialect. It’s so current, so fresh, so urban."

While "In the Heights" showcases such music as merengüe and salsa, it also features many of the hip-hop and rap rhythms that made Miranda’s "Hamilton" a hit, noted Mark Cuddy, Geva’s artistic director.

Overall, both Cuddy and Paredes agree that "In the Heights" — which opens Sept. 5 and runs through Oct. 8 — is the perfect opener for one of Geva’s most diverse seasons. Other upcoming productions include "The Diary of Anne Frank" and "The Agitators," which is about Susan B. Anthony and Frederick Douglass. Geva has partnered with area organizations for those shows as well, Cuddy said.

Cuddy noted that the partnership between Geva and RLTC for "In the Heights" has been "terrific" in helping with casting and promotion. With the show’s focus on a Latino community, Geva wanted to ensure authenticity, he said.

"It’s going to feel very authentic, and that’s important," he said. "Also (in) celebrating the ‘In the Heights’ cultures that perhaps Geva has not celebrated on stage very often … we wanted some connections, authenticity, in our Rochester community."

RLTC was happy to provide not only guidance on the production’s Latino themes, Paredes said, but also the benefit of its past experience staging "In the Heights" with Rochester Area Performing Arts (RAPA).

The RLTC partnership introduced Geva to local talent, as was evident in the casting choices for "In the Heights," Paredes said. Additionally, the show will introduce Geva to many Latinos in the area, she added.

"We want to see ourselves on stage," she said. "The Latino market, we’ve got money to spend as well. We enjoy the arts as well. … I’m excited about the partnership (with Geva) and hope we will continue to engage with each other."

Supporting organizations like Geva is a two-way street, though, Paredes added.

"We also hope this opens Geva’s mind and other theater companies around town," she said. "When the opportunity for collaboration with smaller community theaters arises, it can lead to bigger partnerships and bigger impact in the community."