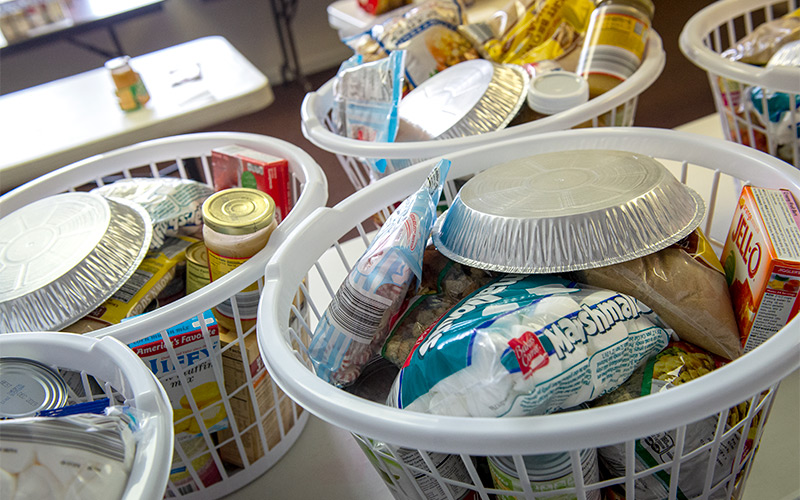 Food items are prepared to be distributed through the food pantry at St. Jude the Apostle church in Gates Dec. 21, 2016.

These items top the list of basic human needs. And over the last 50 years, the Catholic Courier/Catholic Charities Christmas Appeal has brought them into reach for thousands of people. The appeal has raised more than $413,000 just since 2009.

Each year appeal proceeds are distributed to the emergency funds of various Catholic Charities, affiliated agencies and ministries throughout the 12-county Diocese of Rochester. Caseworkers and staffers at these agencies and ministries use the funds to meet a wide variety of immediate needs for their clients. Donations to previous Christmas Appeal campaigns have been used to pay for such needs as prescription medications, utility bills and fuel oil for people experiencing acute financial crises.

The 2018-19 campaign brought in a total of $39,130.85, which was contributed by 455 donors, according to Chloe Longabaugh, appeal coordinator and circulation manager for the Catholic Courier and El Mensajero Católico newspapers. Some participants donated $5, others donated over $1,000, but most donors gave between $25 and $100, she said.

Through these various ministries — some parish-based and others community-based or ecumenical — within Monroe County, Hunger Relief Grants have far-reaching effects that touch people from all walks of life. Last year’s grants, for example, went to 17 separate ministries and outreach programs, according to Marcus Ebenhoe, Catholic Family Center’s director of advocacy and parish social ministry. Among them were:

• Life Solutions of Hamlin, which serves the physical, social and spiritual needs of people in the rural community; and

The effects of the Christmas Appeal are not limited to Monroe County, however, as Catholic Charities agencies throughout the Finger Lakes and Southern Tier regions each also receive a portion of the appeal’s proceeds.

Organizers have set the goal of this year’s appeal at $45,000. Contributions to the appeal will be accepted through February 2020.

Individuals also are encouraged to contribute to the appeal on Dec. 3 through ROC the Day, an annual, communitywide online fundraiser for not-for-profit organizations in the Rochester area. RocStar bonus donations of $500 will be given to each organization that “wins the hour” by receiving the most donations during designated hours, so the Christmas Appeal’s organizers are asking anyone who is interested in donating online during the ROC the Day event to do so in the 4 p.m. hour. To donate through ROC the Day, visit www.roctheday.org/CatholicCourierCatholicChariti esChristmasAppeal.