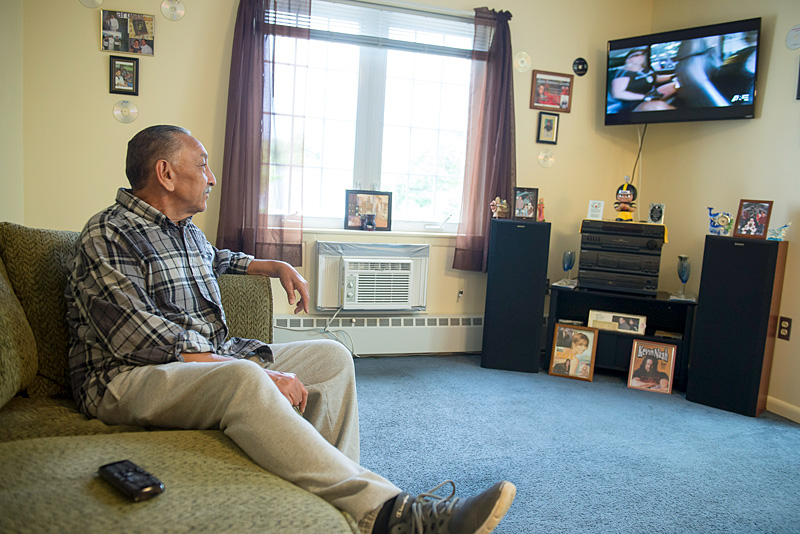 The need for affordable housing options in Monroe County and surrounding counties will continue to expand as the senior citizen population continues to skyrocket, according to officials from several local agencies.

Amy Casciani from PathStone Corp. said the nonprofit organization has hundreds of people on waiting lists for all of its units. PathStone, which partners with such local developers as DiMarco and Cornerstone, has built and operates senior complexes across the region from Albion to Lyons, with hundreds of apartments in the city of Rochester, she said.

"And that’s just the people who stay on the list; lots of people don’t want to wait," she said. "There is an increasing need for senior housing. … Once people move in, they don’t really move out until forced to because of health reasons."

Maria Rodriguez stirs a dish cooking on the stove  at her Buena Vista Manor senior apartment in Rochester June 27.

The need for apartments that offer senior citizens independence and socialization also is growing because there is an increasing number of seniors wanting to "age in place" as well as a continued boom in the older population, according to national surveys. A 2014 survey by the Association of Retired Persons (http://bit.ly/20RBtvF) found that 87 percent of adults ages 65 and older want to stay in their houses or their communities as they age, while 71 percent of people ages 50 to 74 prefer to do so. The number of people ages 65 and older in the United States is expected to increase to 88.5 million — or 20 percent of the population — in 2050, according to the 2010 Census (www.census.gov).

"So that (senior citizen) population is large and you have to provide for them," said Eugenio Marlin, president of Ibero-American Development Corp. "They are stronger overall, and they’ll be living longer."

IADC recognized the need to specifically address the needs of Latino seniors nearly two decades ago, he said. While most Latinos do not choose to place their elderly parents or grandparents in nursing homes, Marlin said Ibero’s senior citizen complexes offer an option where seniors can live independently but still feel part of a community. Buena Vista Manor and Edison Senior Complex one-bedroom apartments also are located in the city, which is preferable to many Latino families, he added. The agency is working on a third complex in partnership with Home Leasing of Rochester, as the 30-unit Buena Vista and eight-unit Edison complexes — which are geared toward Latinos but open to anyone — have waiting lists, he said.

The rents for the IADC senior citizen complexes are subsidized through the U.S. Department of Housing and Urban Development (HUD), Marlin explained, with the goal that rental payments represent 30 percent or less of a senior’s income.

"If you provide some amenities … just like at Centro do Oro, they feel at home," he said of Ibero-American Action League’s senior center. "They come and congregate within the building they live and build the same kind of community and sharing. Latinos like to knock on neighbors’ doors and watch telenovelas together or play dominoes."

The need for seniors to socialize also has been recognized by the Rochester Housing Authority, which aims to provide such opportunities within its apartment complexes located throughout Monroe County, said George Moses, president of the RHA’s board of directors.

"A lot of our older folks don’t want to be shut-ins," he said. "They want that sense of communal living. … Our apartment complexes can’t just be places to lay their heads."

Since it receives federal funds, RHA also has the ability to offer subsidized rental units with amenities like gathering places that also are aesthetically pleasing, he said.

"Everybody wants affordable housing," he said. "The concept is they (seniors) want quality housing and they have earned the right to have (such) housing in apartments that help them age in place instead of going into nursing homes or feeling a sense of isolation."

Appropriate housing with supportive services can mean the difference between independent living and care in an institutional setting, according to a 2014 report (http://bit.ly/2t9xeRA) from the Joint Center for Housing Studies (JCHS) of Harvard University. The report also projects that the number of people over the age of 75 living alone will nearly double from 6.9 million in 2015 to 13.4 million in 2035. Such people may face a number of challenges to their well-being, including limited financial resources to meet their housing costs and other basic needs, the report found.

Even if the income distribution of the older population remains the same as today, 6.5 million households will have incomes under $15,000 in 2024 — a 37-percent jump in a single decade, according to the Harvard report. The number of older households with incomes between $15,000 and $29,999 would add another 2.9 million lower-income households, which would pose a strain on the availability of affordable housing and supportive services, the report states.

Fixed incomes is another important part of the economics of how agencies and developers address affordable-housing needs, Moses said.

To address that concern of affordable housing for seniors, PathStone recently developed its first Medicaid Redevelopment Project in Greece, Casciani said. The project allows Medicaid funds to be used to provide such services as nutritional programs for the seniors at the apartment complex, she explained.

"Lots of people … want to go (into apartments) where they don’t have to worry about anything," she said. "We’re seeing it in the city, in rural areas, seeing it everywhere."

To help lower-income seniors, PathStone sets aside units for tenants who qualify for Section 8 — a federal rent subsidy from HUD — including in its Albion complex that is a redevelopment of a former school, Casciani said.

"So, we can reach seniors that really need it (affordable apartments)," she said.