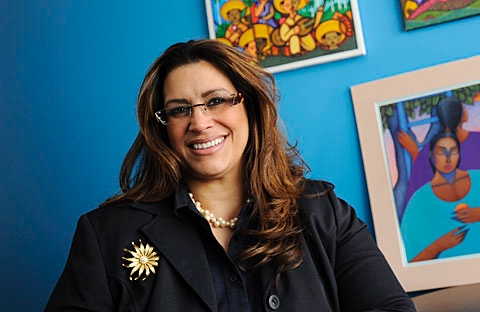 EDITOR’S NOTE: This is the final story in a two-part series.

ROCHESTER — Marisol Ramos-Lopez was 19 when she finally revealed to her mother that she had been sexually abused as a child.

The conversation proved incredibly difficult for both of them, she said, but Ramos-Lopez spoke up to protect another relative. The uncle who had abused her for years — from the time she was 7 years old — was never prosecuted and had convinced Ramos-Lopez that no one would believe her if she told people about the abuse.

"We’ve had very limited conversations about this, my parents and I," Ramos-Lopez, 40, said during an interview in January. "For them I think … it is too heartwrenching. But the conversation I always get, that recurs is, ‘How is it that it happened? I was there.’ I wasn’t allowed to go to movies with my friends. I wasn’t allowed to sleep over at anyone’s house. I wasn’t allowed to go out. I had a chaperone for my prom! So this is how overprotective my mom was and what she’s saying is, ‘Can you believe this was happening right there in her own home?’"

That kind of shock and disbelief is not uncommon in families, said local child-abuse experts from the Bivona Child Advocacy Center and the National Center for Missing & Exploited Children (NCMEC), for whom Ramos-Lopez has raised funds by sharing her personal story. Her advocacy work earned her a Reconocimiento Award for volunteer leadership from Latinas Unidas last fall.

And for Hispanic families, that initial shock is often dealt with by placing a veil of secrecy over the abuse, said Mary Whittier, Bivona’s executive director.

"Issues about family, issues that had to do with us, were to remain with us," Ramos-Lopez concurred. "We don’t talk about our business anywhere."

Such secrecy opens the door to more victims, as was the case in her own family. Ramos-Lopez added that she has long suspected other family members were abused as well; at age 19 she decided to speak up about her own abuse to prevent another potentially abusive situation in the family.

Families of every culture in this country need to break the silence and talk openly with each other more often so that this kind of abuse can be prevented and addressed if it has occurred, Whittier said.

"We’ve got to get to a point where we understand that with silence we’re reinforcing that shame, that blame," she remarked. "If we don’t talk about this as adults, how are we going to get kids to talk? Educational awareness is needed across every community, every ethnicity, every family, every city and town. … (Sexual abuse of children) is real. How can I best protect my children?"

Ramos-Lopez and her sister, Carmen Ramos, are determined to help offer some answers to Latino girls and families through a series of workshops they are planning to present nationwide through Ramos’ company, Celebra la Vida con Salud.

Their family continues to deal with accepting that Ramos-Lopez was abused, Ramos explained, because as is the case with many Latino families, her parents opened their house to relatives who needed a place to stay and are pained that that hospitality opened the door to such abuse.

"They were not mere spectators," her sister wrote in an e-mail about their parents. "They were deeply troubled by what occurred and as most folks, would prefer that it were not true. In effect, they had to question themselves, all they had stood for in helping others and question their belief that people inherently are good and mean well. In the best way they can, they have demonstrated their love and support and I know hurt with her."

Ramos-Lopez saw that support firsthand during a visit in recent years to her childhood home in Miami. She had spoken to her parents about her reluctance to even step into the house, and they changed the setup of the living room to welcome their daughter and two grandsons into their home. It was the jiggling of the doorknob that was the signal for Ramos-Lopez to go visit with her uncle in a separate area attached to the house, where the abuse would take place.

"My dad changed every doorknob in the house," she explained. "And the way the sofas were placed were changed. And my house had always been exactly the same."

That move again demonstrated the goodness of her parents, who are the kind of people that go out of their way to help others — especially family, the two sisters concurred.

"Marisol grew up with a set of very committed parents," Ramos said. "Parents who saw good in all (people). … They welcomed folks to their home who were looking for better opportunities for their families, themselves. They saw themselves as a vehicle for others to succeed. Actually, they saw it as their responsibility to help others because they were in a place they could. They were committed to their community, to their church. They gave back in every sense of the word. It was in that spirit that someone they sought to help acted with different intentions."

Such cultural norms of hospitality and putting family first can make alertness to any potential abuser even more challenging, but it is not an easy task in general, Whittier acknowledged. One of the most important things parents can do is educate themselves and speak openly with their children, she added. Such websites as www.d2l.org provide valuable information including top-seven actions parents can take to protect their children, such as minimizing opportunities and acting on suspicions.

"Ninety percent of kids are molested by someone who they know, love and trust," Whittier remarked. And the national rates of abuse are staggering: one in four girls and one in seven boys, she added.

"What we talk about is finding a balance between paranoia vs. a free for all," Whittier said. "Things like not letting your kids go with anyone you only know casually. Offenders prey on vulnerability."

Surrounding a child with trusted adults is necessary in terms of communication and prevention, emphasized Ed Suk, executive director for the Rochester regional chapter of the NCMEC. One of the seven steps to protecting a child includes talking about this issue.

"If they don’t have a trusted adult, the likelihood of them falling victim to crime … increases significantly," he said. "If they know they can go to someone that will believe them, it’s much easier for them to become empowered to be safer. And to break the secrecy if a child ever experiences anything inappropriate."

Ramos-Lopez’s decision to share her story was based in large part on her desire to prevent abuse of other children as well as to ensure that abused children and their families have somewhere to turn to, noted Whittier. The two women first met when Ramos-Lopez was on the board for NCMEC’s Rochester office and the agency was in the midst of developing plans for Bivona. Whittier said that Ramos-Lopez has pondered what her life would have been like had a place such as Bivona had been available to her.

Ramos-Lopez’s openness about her abuse has had an incredible impact on raising awareness locally on the victimization of children as well as her leadership serving on both agency boards, Suk said. Other prominent leaders nationally are doing so as well, including Massachusetts Sen. Scott Brown who wrote in a recently released book about being abused as a child.

"It’s incredibly challenging and emotionally difficult to do that," Suk noted. "Yet it’s so important because the public at large doesn’t have many opportunities to hear from survivors and fully understand what the experience is for a child when they have been victimized. … For parents and adults to get a window into what it might be like for a child."

And whereas NCMEC seeks to educate and increase awareness about sexual abuse, exploitation and Internet safety, as well as step in when children are reported missing, Bivona offers important services in one building to children who are abused. Families work with a team on staff to report abuse to law enforcement as well as have the child receive medical treatment and counseling. Only one team member, usually representing Child Protective Services, will interview the child while the rest of the team observes, she explained.

"It’s very child friendly with a lot of stuffed animals and toys and colors," agreed Ramos-Lopez. "It’s to minimize the trauma. Because retelling your story and having somebody you don’t feel is compassionate or believes you, it’s retraumatizing."

Ramos said that the focus of the curriculum she and Ramos-Lopez are developing will be on healing for Latina girls and their families. Plans include a speaking tour to foster dialogue in communities as well as a promotional campaign at health fairs and on television, the Web and social-media sites. A launch of the pilot program is expected by the end of this year, Ramos added.

"Marisol inspires me," she said. "To see how she has survived the most intimate violation and still have the ferocious roar of the lion who will protect her lair — gracefully and majestically motivates me to stand by her side and help make sure that (her) vision comes to fruition."

Ultimately, Ramos-Lopez said that she has learned to live by her mom’s credo: "No may mal de por bien no venga." (There is nothing so bad from which goodness can’t be found.)

"I did not let that (abuse) dictate what my life was going to be like," she remarked. "Something really bad did happen to me and now what I have to do is ensure that other kids don’t let it happen to them."

EDITOR’S NOTE: To learn more about the services offered by the Bivona Child Advocacy Center, visit www.bivonacac.org. Information for parents from the National Center for Missing & Exploited Children in Spanish can be found at www.take25.org.