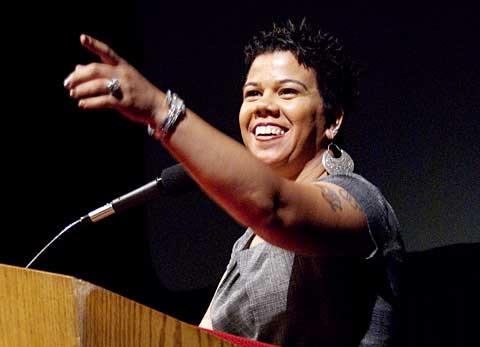 HENRIETTA — Making note of her whereabouts Oct. 3, Rosa Clemente referenced a quote by one-time Rochester resident Frederick Douglass: "If there is no struggle, there is no progress."

As Douglass did more than a century ago, Clemente struggles against the establishment to gain progress for minorities — a commitment that led her to become a 2008 United States vice-presidential nominee. During her appearance at Rochester Institute of Technology as keynote speaker for Hispanic Heritage Month, Clemente encouraged the mostly young-adult audience of nearly 100 to embrace activism in their own lives.

"I urge you to go against the grain," she said. "Don’t you go along to get along. If your ancestors did that, there would be no black people at RIT and (they’d) still be in shackles."

Clemente, 37, is a community organizer and independent journalist. Last year she served as running mate of former Congresswoman Cynthia McKinney on the Green Party ballot, completing the first female minority presidential ticket in U.S. history. The Bronx native has collegiate ties to upstate New York, having earned her bachelor’s degree from the State University of New York at Albany in 1995 and her master’s degree from Cornell University in Ithaca in 1998.

Clemente, who is of Puerto Rican descent, voiced multiple concerns about the present-day plight of Latinos and African Americans this country. Among those concers are police raids on undocumented migrant workers; a rising level of hate crimes against Latinos; routine police brutality toward minorities; and a continually disproportionate level of minorities in prisons. Citing these examples, Clemente stated that racism is far from dead in this country simply because an African American has been elected president.

Regarding the ongoing health-care debate, Clemente said she’s appalled by President Barack Obama’s stance that undocumented workers wouldn’t be covered under his proposed reform plan, stating that blanket health-care amnesty should be available for anybody living in this country. When asked by an audience member how our government could afford to do that, she quickly suggested stopping the U.S. occupation of Afghanistan and Iraq, and said "32 percent of our taxes still goes to military aid."

That viewpoint is consistent with the Green Party’s stand on nonviolence. The party, which espouses a grassroots, democratic type of government, agrees with positions of the Catholic Church on such topics as environmentalism and protection for the poor and oppressed. However, the Green Party also clashes with church teachings in its support for such causes as gay marriage and abortion rights.

Clemente, who grew up Catholic but said she is now an atheist, said doesn’t judge anybody on religious beliefs as they relate to political causes.

She shared with her RIT audience her views on issues that cut across all racial divides, including health and dental care, unemployment, an insufficient living wage and homelessness. She pleaded for listeners to become more involved in causes that could ultimately have direct impact on them, saying the best way to do that is to unite. She also stressed that while modern technology can help people to connect initially, it’s not an adequate replacement for good old-fashioned activism.

"People need to get offline and start going to a meeting and have an attention span that lasts more than five minutes. It’s all relationship-building," Clemente said, adding that she has a Facebook account but will never have Twitter: "People under 40 don’t even know how to have a conversation with people. We’re not building relationships."

Once again challenging the audience to leave their computers behind, Clemente said young adults can best learn about civil-rights pioneers in this country by studying their writings in-depth: "Get off Wikipedia and actually open the book."