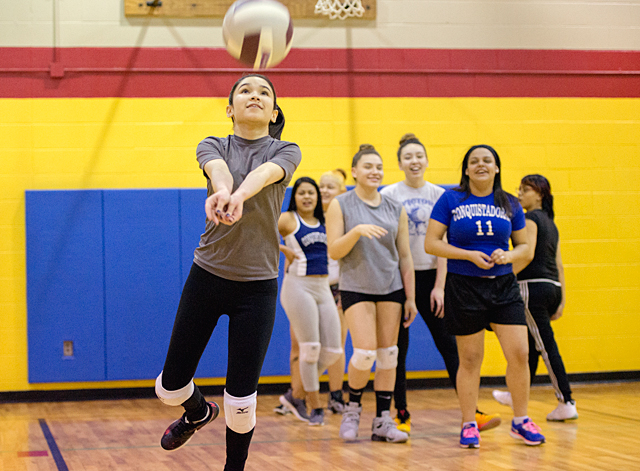 Miléika Dávila has been playing volleyball at James Monroe High School since moving to Rochester from Puerto Rico two years ago. She also is one of the girls who approached Angel Alicea about starting some kind of post-season program so she and other teammates could play year-round.

The Rochester Volleyball Academy was formed, and a group of 20 players, mainly from Monroe and East high schools, have been practicing weekly at the Carter Street Recreation Center since last November, said Alicea, who trains the group.

"We want to keep practicing and improving," said Miléika, 17.

The sport is very popular on the island of Puerto Rico, and most kids grow up playing volleyball, she said, including herself and many of the girls in the academy

"My mom has been a player forever," she said. "I started playing as a young child and I’ve liked it since then."

Miléika hopes more girls join the academy so they can form a house league, which the recreation center has offered to sponsor, said Alicea, who has been coaching girls’ volleyball teams at Monroe for a few years. He started the academy in November following the end of the girls’ school season. The academy is offered to girls in grades 7 through 12, he said.

As many as 50 kids, including boys from the neighborhood, have participated during one of the weekly practices held on Thursday evenings, said John Picone, the athletics and aquatics director for the city’s recreation and youth services.

On average, though, about 20 girls come out to practice every Thursday, Alicea said.

"It’s a very positive activity in the neighborhood," noted Picone.

Mileika Dávila laughs with her teammates during a volleyball practice at the Carter Street Recreation Center in Rochester Jan. 14.

If the group attracts enough players to start an in-house league, the center would offer trophies and a banquet for the teams, he added. The center currently doesn’t charge the group for use of the facility, Picone said, and would provide funding for team T-shirts for players in a league.

In the past, the center also has hosted travel leagues in the past for other sports, such as basketball and football, and the teams have competed with other such facilities or organizations as the Boys & Girls Club, Picone said.

"We’re always willing to expand to other sports like volleyball," he added. "That would be a fantastic thing."

Expanding the program would offer great opportunities for the group of girls who consistently attend the practices to improve as players and as leaders, noted Awilda Ayala, who has been volunteering and helping Alicea with drills and scrimmages since the weekly academy sessions began.

The girls are respectful and attentive, as they are eager to become better players, she said. Also, they get along well even though they are competitors during the season playing for their respective high schools, added Ayala who also played in her native Puerto Rico. She moved to Rochester 13 years ago, and two of her four daughters also play, she added.

"This is my passion," Ayala said of volleyball.

Alicea shares that passion as a player from his childhood days in Puerto Rico to playing for Monroe when he moved to Rochester in the early 1980s.

In addition to becoming first-class players, Ayala and Alicea said that they hope the girls parlay the discipline and focus they gain from their volleyball experience into a better future that includes graduating from high school and going on to college.

Alicea often posts motivational messages on the group’s Facebook page as well as photos and videos taken during the weekly practices. He is well-known in the community through his longtime participation and leadership in the Rochester Hispanic Youth Baseball League.

"We have a good coach … who’s always looking out for us," added Miléika. "And those of us who are playing (are) pretty good."

Alicea said that eventually he hopes to partner with local groups and provide the girls with mentors and workshops to keep them all on the right track for their academics and personal goals. He even has them bring homework along with them so they can work on it if there is any down time during practices, he said.

The group of players he is working with is so talented, Alicea said that he hopes the year-round training also will lead not only to college but also scholarships.

For more information about the Rochester Volleyball Academy, click here.